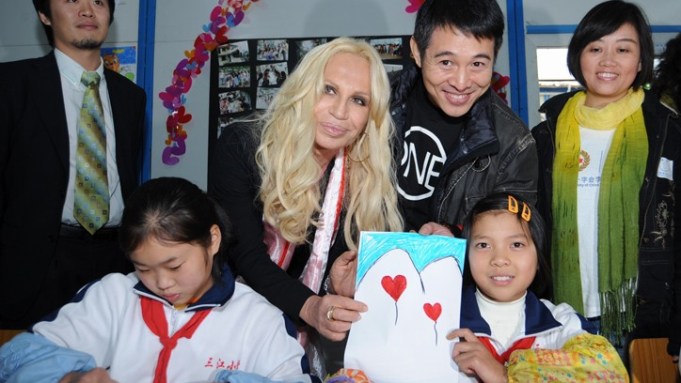 SANJIANG, China — For days after the earthquake flattened nearly every home here, killed thousands and destroyed the elementary school, this tiny mountain village was cut off from aid by landslides, its survivors unseen by the world.

On Tuesday, nearly six months to the day of the quake, Donatella Versace and Chinese film star Jet Li left Sanjiang and its 400 elementary school students know they’re not likely to feel forgotten again soon. In a frenzy-inducing visit to the village to see the fledgling school and counseling center funded by Versace through the Jet Li One Foundation, the designer and Li played with the children and admired their artwork as hundreds of parents and villagers crowded outside the school grounds to watch.

Scads of children, most of whom recognized Li and guessed that Versace must be famous, clamored for autographs from anyone who could write in English as police and harried teachers tried to impose order amid mayhem. While select kids performed a traditional dance and put on a countryside fashion show for the famous guests in the schoolyard, one mother watching from behind the crowd smiled at the happy chaos.

“We’re glad to have a school again in Sanjiang,” said Yang Xiaowen, clutching the hand of her five-year-old son, who will start school next year.

Yang carried a second child in a baby sling on her back, a son born three days after the earthquake. The baby never met his father, who died in the quake.

It is stories like hers that drew Versace to Sichuan Province to see for herself the devastation wrought by the May 12 quake, which resulted in 88,000 people dead or missing — some 10,000 of them children — and left millions homeless. Versace said that as a mother, the images from the quake affected her deeply and “the expression in the eyes of the children” was haunting. But she wanted to see the area herself and find the right aid project in which to involve the fashion house long-term.

“When you see things on television, you don’t know if it’s true,” said the designer. “I wanted to see it with my eyes and touch it myself.”

Witnessing a slice of the human and physical devastation clearly left an impression on the Versace entourage. Versace, who is hosting a fashion show and auction to raise money for the earthquake relief project this week in Beijing, traveled across China to see Sanjiang with Li and Versace chief executive Giancarlo Di Risio. Their grueling trip started with a flight to Chengdu the night before and ended in six hours of driving, at times over treacherous mountain roads still battered by landslides and mud. The caravan of sport-utility vehicles with a police escort at the front passed three car accidents on the way, but the focus remained squarely on the destruction caused by the earthquake and how to help survivors.

The school in Sanjiang, which opened with temporary buildings in September, is a boarding school with a purpose. Besides a place to live while their families rebuild their homes, the children get trauma counseling in their classrooms and one-on-one sessions with 40 doctors on hand. Versace hopes to raise $1.2 million more to open two or three schools of this model in the earthquake zone.

“I cannot begin to imagine the terrible effect something like this must have on young children,” said Versace. “Children want to feel safe and cared for, and so I hope that through providing expert care for them, we might be able to bring back some of that feeling of security into their lives.”

Di Risio was visibly moved by the scenes and the schoolchildren. In an interview before departing for Beijing, he spoke philosophically about how the trip had prompted him to be mindful of the hardships faced by many in the world. Those in the luxury industry, he said, have an even greater responsibility to look beyond their own bubble and offer aid.

“People in the world we live in need to make an effort to see what’s going on,” said Di Risio. “We should bring our own children here to meet these children and see the hardships.”

Di Risio said the school — the permanent structure is under construction next to the temporary buildings — made him ponder how management experts like himself could get involved directly with practical organizational advice. He also said this project is the start of a new trend for Versace’s philanthropic initiatives. The company will seek out projects like Jet Li’s One Foundation that offer longer-term, sustainable aid that can meaningfully change lives.

“It’s easy to write a check, but we wanted to do something where we involved our own people, our own resources and ourselves in the first person,” he said.

This kind of personal, hands-on involvement is exactly what Beijing-born actor Li had in mind when he created the One Foundation two years ago. Li, who had a close call with his family while in the Maldives during the 2004 tsunami disaster there, was passionate enough about promoting personal action that he took a year off from acting to work full-time on philanthropy.

“I don’t ask for ceo’s money, I ask for their hearts,” said Li. “With hearts we can change a lot.”

Amy Zhao, chief executive of the One Foundation, said Sanjiang was chosen for aid in part because it suffered the worst from lack of assistance in the days that followed the earthquake. As aid workers flocked to hard-hit areas with better road access, so did the majority of media attention, volunteers and charity efforts. Perhaps the new center, and the attention that followed Versace and Li there, can help make up for that.

For the 400 children in Sanjiang who saw their school, homes and many lives destroyed in the earthquake, the evidence that healing has begun might be best seen in their artwork.

“When we first went there, the children were all painting in black and white and gray,” said Zhao. “Now you can see most of them are painting with a lot of color.”