Tonight the designer's much-hyped collection for H&M — which has been a year in the making — debuts at New York's Pier 57. 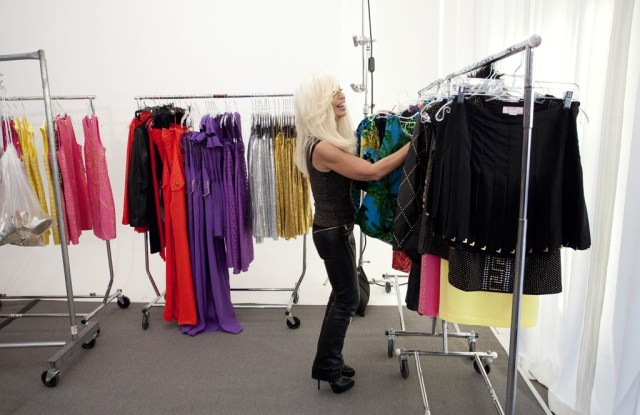 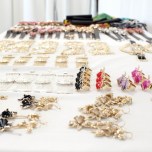 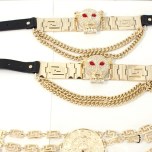 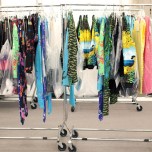 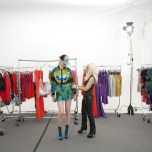 “It’s in the air. Absolutely. I feel it — it’s a very Versace moment,” said Donatella Versace Saturday as she prepped for tonight’s Versace for H&M show, which has been a year in the making. Dressed in black leather pants and a studded Versace for H&M tank, her eyelids covered lashes-to-brow in black shadow, one veiled by a sweep of platinum hair, Versace and her collection infused the blank, white space at Milk Studios — the outpost for hair, makeup and fittings — with a blitz of color.

Across the street, Pier 57 was undergoing a similar transformation into “Versace for H&M Hall on the Hudson,” as it will be known for one night only. Without getting too specific, the designer said that production will include three videos by Johan Renck, musical performances by Nicki Minaj and Prince, as well as the unmistakable sound of Versace’s voice. Victor Calderone, who is doing the music for the show, mixed Versace’s vocals — speaking in English, specifically — on a track. “It’s the funniest thing because I can’t sing,” said Versace with a laugh. “I’m going to say, ‘Nicki and Prince, you’re time is over. It’s all about me!’”

If H&M had its way, all of this would have happened two years ago, when the company initially approached Versace about a collaboration. But at that time, the answer was no. “I wanted to work to stabilize the main collection everywhere in the world,” said Versace. “We were strong in most places, but other places we had to work.” The company restructured and since then the tables have turned in her favor, sales are up, the business is growing, and the Versus collection, Versace’s secondary line co-designed by Christopher Kane, has been brought back in-house.

It seems whatever force of nature sways the collective taste has put it in the mood for Versace’s brand of conspicuously sexy glamour, and not just because anything Lady Gaga, who Versace shrewdly offered to outfit in archival looks for two recent videos, touches turns into zeitgeist. Although, that helped. “The reaction to her was amazing,” said Versace. “Everybody was writing on our Web site to ask where they can find this and that.” The runways, too, have been flooded with Versace tributes — this past season at Lanvin and Dolce & Gabbana, and last fall in the panther and pin-up prints at Givenchy. “Riccardo Tisci is a friend of mine,” said Versace. “He told me he had every Versace campaign as a poster as a child.”

As complimentary as it is to have one’s creative peers bask in your glow, it’s even better to lure a new audience all together. “I’m always looking at young people,” said Versace. “Girls today love to dress up. They love the Medusa. You see it even if they just buy a belt or sunglasses. They want to look cool and sexy. They don’t want to look ordinary.” Kristen Stewart, Carey Mulligan and Elizabeth Olsen come to mind when asked to name a few youthful persons of interest. “Of course, I love Lady Gaga and Nicki Minaj,” she said. “They’re not afraid to dare. It’s been a while since someone went out there and didn’t listen too much to the marketing people. You still have to listen to them but not 100 percent.”

The 43 looks in the H&M collection, which hits stores Nov. 19, were designed with these provocative young ladies in mind. Studded leathers, inspired by Gianni Versace, Miami palm tree prints and some of Donatella’s recent prints, including colorful hearts, have been reworked on trenches, pleated miniskirts, baseball jackets and tight dresses with alluring cutouts. It’s Versace for a new generation — a look brought to life when the models Daphne Groeneveld and River Viiperi, both there on Saturday for fittings, emerged from the dressing area, where Versace’s daughter, Allegra, was assisting the stylist Joe McKenna, in a black leather trench covered in studs, and a head-to-toe fuschia suit, respectively. “It looks rich,” Versace said, handling a leather and chain-link choker with a bejeweled tiger head on it, though the collection’s prices top out at $299.

New York was chosen for tonight’s event for the same reason Versace showed her first Versus collection here more than 20 years ago. “I’m never tired when I’m in New York,” she said. “It makes you want to do things.”

If only one can find the time. The Maurizio Cattelan exhibit at the Guggenheim and “Picasso to Koons: Artist as Jeweler” at the Museum of Arts and Design were on her list of sights to see. So was the Kanye West and Jay-Z concert. But as of 6 o’clock on Saturday evening, she hadn’t had a minute to do anything but work.