NEW YORK — After surveying the latest looks in Europe, Doneger Group trendspotters David Wolfe and Amanda Hallay believe the future of American fashion lies in the ever-popular tunics and gypsy skirts, "razzle-dazzle" accessories and a splash of... 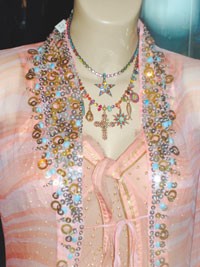 NEW YORK — After surveying the latest looks in Europe, Doneger Group trendspotters David Wolfe and Amanda Hallay believe the future of American fashion lies in the ever-popular tunics and gypsy skirts, “razzle-dazzle” accessories and a splash of orange as well.

“I feel about 100 years old,” joked Hallay, after noting that “Nineties Brit Pop” is now the new “vintage” look coming out of Berlin.

They made their observations during a presentation Wednesday titled “In Search of Style” at the Doneger headquarters here. Representatives of Macy’s, Neiman Marcus, Liz Claiborne, Estee Lauder and Phillips-Van Heusen were among those attending.

While other retro motifs such as skull and crossbones and Seventies-inspired smiley prints are hot in Berlin, Wolfe and Hallay found gypsy skirts, paisley prints and flashy accessories to be some of the key must-haves in Saint-Tropez and London. And while London showed a down-and-dirty denim look for men, they said women were in “street sweeping” skirts paired with crocheted tops.

And what would a trend analysis be without a few style tips from Paris?

This season, Paris is morphing from elegant looks to something downright sassy. Fun accessories and a sudden curiosity over voodoo dolls have Parisian women wearing good luck charms on their Louis Vuitton purses. Meanwhile, Wolfe said knockoffs of the “self-fringed” Chanel-styled jacket are over. Printed skirts, multicolor striped men’s dress shirts and a touch of citrus seem to be everywhere.

As these trends flourish in Europe, Wolfe and Hallay believe the looks will soon hit these shores, bringing colors such as turquoise and brown, stylish, big-beaded jewels, and men’s harmoniously colored shirts. They also expect to see a transformation of the tunic from boho to chic.

But while European fashion may be leading the trends, Wolfe invoked a Coco Chanel statement: “Clothes don’t become fashion until someone wears them.”