The designer was both blunt and at times funny about her highs and lows when talking with Fern Mallis. 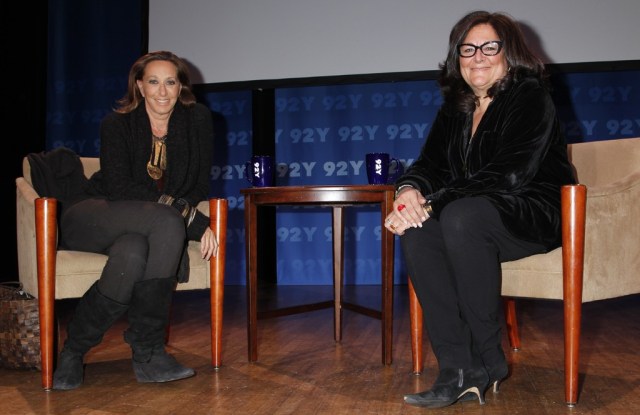 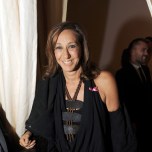 Barreling uptown Thursday night for what would be a very public grilling by Fern Mallis at the 92nd Street Y, Donna Karan had one last-minute call to make from the backseat of her black Escalade.

“I called Calvin and said, ‘All right, what’s this all about? He said to me, ‘Oh, it’s really amazing. You’re going to love it.’ ”

This story first appeared in the January 17, 2012 issue of WWD. Subscribe Today.

And like Klein, who had sat in the same hot seat for a this-is-your-life-type talk a month or two back, Karan was both blunt and, at times, funny about her highs and lows. Whether impersonating Bill Clinton asking her to design a tuxedo four days before his inauguration, discussing Barbra Streisand’s first visit to her showroom — “I think I need to sit down and take a pill” — or sharing adman Peter Arnell’s initial reaction to her DKNY idea (“He said, ‘I think that’s the most ridiculous thing I have ever heard”), the designer didn’t gloss over anything. She recalled how Kay Thompson helped her do her first fall collection, and how she first fell for her second husband at her engagement party for her first marriage. Her candor was also in full force in regard to taking her company public and selling it to LVMH for $640 million in 2001. “Going public was the most exciting day of my life,” she said.

Even Karan was occasionally blindsided by her many accolades. Reminded how Giorgio Armani once presented her with the CFDA award for men’s wear, she said, “Oh my God, really? I did not remember. I’m telling you, Fern, that [fact] sheet is fabulous. I might write a book now.”

Reminiscent as the lengthy chat was, the Queens-born, Long Island-raised designer also spoke of what is yet to be, showing off ads from her new campaign that was shot in Haiti and required hiring 85 Haitians. Just back from a trip there, Karan is so dedicated to the restoration of what is the poorest country in the Western Hemisphere that she had asked Mallis about Skyping their talk so that she could have extended her stay. To do her part to help Haiti rebound from the massive earthquake two years ago, Karan has installed Urban Zen-trained integrative therapists in the hospital, developed an accessories collection sourced from regional goods and has dreams of opening a hotel there. Karan is also keen to create a hotel-residence in Manhattan that provides all the services of her holistic life, as well as a place for all types of people to come together to brainstorm about ways to merge philanthropy and commerce. “I would have to say if I knocked off anything, it was what the Y is all about.”

The yoga-loving, green-juice-powered 63-year-old designer had loads of other ideas to share with Mallis.

WHAT IT MEANS TO BE A LIBRA
Completely imbalanced. No, as a Libra I try to find balance in everything. But I wait until the last minute to decide things. If you ask me what the collection looks like before it goes out on the runway, I couldn’t tell you. I have no idea. Someone just asked me what the fall collection looks like, and I told them, “I don’t know. I haven’t done it yet.”

WHAT IF…
When Calvin worked in the Anne Klein building, I said to him, “Why don’t we join companies, Anne Klein and Calvin Klein? Because we only need one Klein. Just Klein’s, like the store.” You know, he’ll do fall, I’ll do spring, and then I can go do my trips like I like to.

GROWING UP IN THE FIVE TOWNS
My mother was a showroom model, and my father made custom suits for gangsters. He worked right by Macy’s. He unfortunately passed away when I was three years old, but I remember watching the Macy’s Thanksgiving Day parade. The most important moment of my life was watching the Macy’s Thanksgiving Day parade….I was from the other side of the tracks of the Five Towns, just so you know. I worked in a clothing store, at Sherry’s, as a salesgirl. I wanted to be an illustrator, not a designer, so I would sketch in the dressing room, and all the mothers loved me. I was about 14, 15, and I lied about my age. And I tell anybody in the fashion industry, “If you want to be a designer, you must work in retail.” I wanted to work at Women’s Wear Daily, as an illustrator, and went for an interview. John Fairchild told me that I had better take up design because I wasn’t good enough to be an illustrator. I went to Parsons, but I didn’t graduate. You know that? I had to go to summer school, because I failed draping. I showed them. I failed typing in high school. That’s why I’m not very good on the computer.

EARLY ON WITH ANNE KLEIN
Anne Klein hired me for a summer job when I was 18. My mother worked for Chuck Howard at that point, and Chuck wanted me to meet Anne Klein. I walked in, and she said, “Take a walk.” And I said, “What do I have to walk for?” She said, “Well, you’re going to be a model. Your hips are too big.” That really pissed me off. I said, “No, I want to be a designer.” She said, “Well, let’s see your portfolio.” I told her, “I can only stay for the summer, because I have school.” She said, “Why would you want to go to school when you can learn more here?” So I learned how to make coffee, sharpen pencils. It was an extraordinary experience. I went to work for nine months, and then she fired me….Anne taught me the best lesson in the world — that a designer is a designer even if she’s designing toothbrushes and hospital gowns.”

THE SITUATION
I was engaged to be married to Mark [Karan], and then all of a sudden, at the engagement party, Stephen [Weiss] walks into the room, and I thought, Oh my God, who is he? Ten years older, ponytail, artist — the whole nine yards. We had a little problem. Then I went to Paris and said to Paris, “What do I do? Here’s a guy, my best friend, my first boyfriend when I was 16 years old. He was going to take care of me. Or this other guy who is an artist, hot, bohemian, sort of unavailable. What do I do?” So I married Mark three days later.

TEAMWORK
I always work in teams. It’s always about the “we,” not about the “me,” it’s my people — I cannot. If anybody thinks I do everything….I fit everything, that I’ll tell you. I am a little obsessed about the fit and the body.

ON ANNE KLEIN JUMPING FROM A $10 MILLION BUSINESS TO $75 MILLION WITH THE LAUNCH OF ANNE KLEIN 2
Seventy million with Anne Klein? Not in those days.

ON BEING FIRED FROM ANN KLEIN (THE SECOND TIME)
I went in with this great idea for this small little company for me and my friends, because I was getting very frustrated [with Anne Klein, Anne Klein 2]. I said, I just wanted to do seven easy pieces — my bodysuit, my leggings, my scarf — just wanted a wardrobe for me and my friends. And they said to me, “Donna, there is nothing you can do that is small.” They said, “You’re fired because you can’t do anything small.” That was the end of it, so I moved on and did the easy pieces. I used to dress that way. See, it was really dumb. It was just me. I was all by myself. They gave me the production person Julius Stern, because everybody knew I was a fabric junky. I did the whole collection in my apartment. It’s actually kind of funny.

THE START OF DKNY
I needed a pair of jeans again — and T-shirts. Jane Chung actually came to me — she worked at Anne Klein with me, and she quit, thank God. I really wanted to do a lifestyle brand from food to flowers, children’s clothes. Donna Karan Collection was really for all my friends, but then my kids were wearing all my clothes, so we had a real technical problem. My daughter was walking around in my evening dresses that nobody would wear, even myself. I mean, you would wear them to the Oscars. And she was wearing them to school with boots and beaded clothes. I said, “I have to do a collection for my daughter. This is crazy,” because everybody was wearing my clothes. I felt like I had no identity anymore. I wanted more people, so when I did DKNY, I did men’s, women’s, children’s, dog clothes, it was everything.

MEETING BARBRA STREISAND
Actually, I wanted to be Barbra Streisand. I think everybody in this audience would want to be able to sing like Barbra Streisand. I wanted to sing like Barbra and dance like Martha Graham. I couldn’t do that, so I had to be a designer. My girlfriend called me up and said, “I have someone you’re going to meet, and you’re going to freak.” I emptied out my entire closet and brought it in to show her. I walked into Frank Mori’s office and said, “I think I need to sit down and take a pill.” I had my hair like Barbra. I wanted to sing like Barbra. That’s all I wanted to do. Barbra, of course, only wants her clothes. This is the truest story I have ever done. I had these chenille sweaters that were amazing. They were on the cover of Vogue and everything. I hope there is no legal in the house. I was at Studio 54, smoking a cigarette, and all of a sudden my sweater went up in flames. And I said, “Oh my God, now what do I do? This is the hottest item that is going on right now.” Barbra only wanted these sweaters, and there was no way she was getting these sweaters. We went back and forth and back and forth, and I told her she couldn’t have them. I’m sorry, I love you. There’s no way. I can see it now: Barbra Streisand Burns Up in Donna Karan Sweater. But when Barbra really wants something….She called me up and said, “Well, give me the yarn supplier. I will make them myself. That’s how my life with Barbra began….When Barbra told me she was getting married, she gave me a sketch. Barbra is a great designer. I am not a designer. Barbra is the designer. I make her clothes.

FAVORITE NEW DESIGNERS
There are a lot [I like]. They’re different. It’s different now.