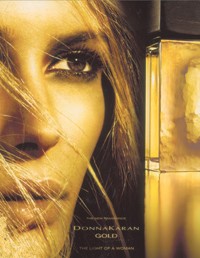 NEW YORK — Ever the alchemist, Donna Karan is determined to turn fragrance into gold. “Our aim was to launch another classic,” said the designer of Donna Karan Gold, her new women’s fragrance, which is slated for an October launch. “And we wanted iconic elements — gold has always been part of the Donna Karan signature. Gold is very elemental and pure —it is warm, it is sexy, and it lasts for a lifetime.”

Fabrice Weber, president of the Aramis and Designer Fragrances division at the Estée Lauder Cos., said that the company will be looking both in the U.S. and abroad for Gold sales: “Historically, the Donna Karan fragrance brand — with Cashmere Mist — has been strongest in the U.S., while the DKNY fragrance franchise was stronger abroad,” he said, noting that 2004’s DKNY Be Delicious women’s scent (followed by a men’s version in 2005) helped strengthen the DKNY fragrance franchise domestically. “With the launch of Gold, we are going to attempt our second global blockbuster.”

“Donna has always been known for her use of black and gold, and sophisticated scents,” said Gabai-Pinsky. “This fragrance is Donna’s vision of femininity, done in a different, modern way.” And different was precisely what Karan wanted. “Donna was very clear — her point of view is that either it’s something, or something else, never something in the middle.”

“The bottle design is a collaboration between two people who have worked together for a long time,” said Karan. Morris has long designed Karan’s jewelry line. Karan’s fragrance bottles had been designed by Weiss, prior to his death in June 2001.

Gold will be available in 1,600 U.S. department and specialty stores, as well as in Karan’s freestanding stores. While none of the executives would comment on first-year sales or advertising spending, industry sources estimated that the fragrance would do between $15 million and $20 million at retail in the U.S. in its first year on counter, and said about $3 million to $5 million would be spent on advertising and promotion. Globally, it could do as much as $60 million to $65 million in net sales, said sources.

National print advertising will break in October fashion, beauty and lifestyle magazines. They will include gatefolds, spreads and scented strips, said Carol Russo, senior vice president and general manager of sales and marketing, North America, for Aramis and Designer Fragrances.