By Rosemary Feitelberg on May 17, 2005
View Slideshow 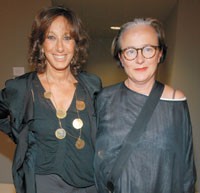 NEW YORK — Unlike the Dutch Village theme park in Holland, Mich., where visitors can linger at the wooden shoe factory or Pieter & the Dike, the Dutch Village that Donna Karan welcomed into her late husband’s work studio Friday night was artistically minded.

A bevy of wide-eyed Dutch industrial artists and other designers buzzed around the cavernous space, admiring each other’s work. Their one common link was their alma mater, the Design Academy Eindhoven, the epicenter of Dutch design today. Jurgen Bey, Hella Jongerius, Maarten Bass and twin brothers Joep and Jeroen Verhoeven helped build the village.

The only person more pleased with the outcome than Karan was the academy’s chair, Li Edelkoort. Standing next to Roel van Heur’s red bicycle equipped with a fire extinguisher, she said, “This is amazing. The generosity of Donna Karan to give me this space is enormous. For the last 10 years, our graduates have explored many traditions using futuristic technology to make them look familiar. We love to blend the old and the new. All these products have a great emotional and romantic quality.”

All too familiar with how fine craftsmanship in ceramics, glass, wood, metalworks, embroidery and knitting is being replaced by mass production, Edelkoort’s crew tries to hold on to some of those features in their work. The old-new combo was evident in Joep Verhoeven’s chain-linked fence that looks like it was in bloom; Jeroen Verhoeven’s curved table that appeared to have been laser cut, and Kiki van Ejik’s hooked rug with a gigantic rose motif. The exhibition folds this evening.

Karan eyed the work like a prospective buyer, examining the handiwork with great interest and peppering the designers with questions about their techniques. The designer said she couldn’t think of anything more appropriate to host in her late-husband’s studio, since he started out as a furniture designer, creating sets for Broadway. On top of that, the gathering captured the spirit of Greenwich Village, which has been a harbor for artists as far back as the Twenties.

Karan credited her friend, Edelkoort, for helping to bring it all together. “Li has been my inspiration in so many different ways — as a woman, as an artist, as a teacher. I think we talk the same language.” Karan said.

Earlier in the evening, Edelkoort insisted the academy was a fine-tuned machine before she got there. “All I had to do was fly the kite,” she said humbly.

One of her prodigies, Kiki van Ejik, created a color-coded, Mondkiaan-inspired piece on the second-floor. She placed a variety of traditional Dutch foods in primary colored square frames, so that viewers would look into each as if they were a little museum.

“I think this is the best exhibit space that we have ever had. The color and the space itself is just perfect for the objects,” she said.

Murray Moss, one of the first to pick up on designers such as Hella Jongerius, agreed. “The students’ work is usually not shown in this type of polished environment even though it is by far the best design school in the world. It gives it the respect which I think it deserves.

Moss liked the juxtaposition of the new and old, especially Job Smeets for Royal Tichelaar Makkum, the event’s sponsor and a centuries-old ceramics company. “To have young artists share the space with the oldest company in the Netherlands is a lovely and correct idea.” Even Julianne Moore checked out the scene.

Edelkoort’s next project is what she calls a “humanitarian effort” to try to revive the textile industry in its mills in Prato and Como, as well as India, which have been hard hit by China’s dominance in recent years. She is hoping to pull together a symposium of fashion leaders to discuss the problem.