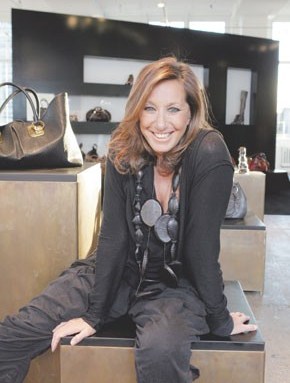 NEW YORK — Donna Karan has tried her hand at handbags more times than most care to remember. So, for her newest go, she looked to the stars for inspiration.

Her latest collection of handbags loosely takes its cues from the Zodiac system, and in the first pre-fall season, the groups are named Leo, Virgo, Pisces, Scorpio, Aries and Libra. Each embodies qualities associated with the sign: Virgo’s bags are solid and grounded, Leo’s are full of confidence and extravagance and Scorpio’s have a sense of self and fearlessness.

“It makes sense — I live by astrology,” she said in an exclusive preview of the collection on Wednesday. “I am a Libra. I can’t make up my mind. We never find a balance. We like it all.”

In typical Karan style, the handbags are all about the touch, from supple leathers and exotic skins such as French bull, ostrich and glazed goat to sculptural gold meditation rocks dangling from each style — “you could sit there and hold it,” Karan joked — and other hardware such as sculptural intertwined zipper pulls company executives refer to as “The Kiss.” Other details include asymmetrical seams, tucks, pleats and contrast hand-stitches on shapes such as functional totes, satchels, saddle bags and casual hobos. “I love the solidness of the zippers, the hardware, the sensuality of it all,” she said. “All the skins make me feel like I am in the leather tanneries myself.”

Picking up a Virgo handbag, she said, “I need a Virgo around me. Libras always need Virgos. My husband [the late Stephan Weiss] was a Virgo.”

Karan herself admits she has been sporting the same bag for many years.

“The challenge was, would I wear this bag? These I would,” she said and, pointing to a large shopper, added, “You know I will be carrying this for the rest of my life.”

This time around, Karan is braced for the fact that her extensive handbag collection is totally separate from ready-to-wear. “Hemlines go up and down faster, silhouettes go in and out,” the designer said. “And the success of bags is that women don’t have to go into a dressing room to try them on. You can try on a pair of shoes and not get undressed.”

The launch seems a little like a case of “If at first you don’t succeed, try, try again,” but Donna Karan International executives are confident that they will get it right this time. Karan is, after all, owned by LVMH Moët Hennessy Louis Vuitton, where luxury goods like handbags are a field of expertise. The conglomerate is said to be very keen on making the Seventh Avenue fashion house a bona fide accessories brand, as well — and putting up the financial wherewithal to make it work.

“We feel very good about the progress being made by the Donna Karan business,” said LVMH Group managing director Antonio Belloni. “It has taken a while, but the different pieces of our strategy are now coming together under the leadership of Mark Weber. At Donna Karan Collection, we are executing much better in the core rtw business, and the customer response is excellent. From this base of strength, we are launching an ambitious accessory line. Donna has always been about functionality and style, and LVMH has great experience in leather goods, so it will be a powerful combination.”

When Weber joined DKI as chairman and chief executive officer, as well as ceo of LVMH Inc. (U.S.) in 2006, he said the brand was bigger than the business, and his main mandate was to correct that notion. To strengthen the Collection business, he and his team of executives, including Collection president Carole Kerner, have implemented several new initiatives and built upon existing ones, including the Gold and Icons collections, offering a widened spectrum of price points, rounding out the assortments with more sportswear and beefing up the pre-seasons.

Weber explained that, where once the Collection offered pieces suitable for the top stores in cities like New York and Los Angeles, there are now also items that can work in branch stores, where customers still aspire to own Donna Karan pieces but would not necessarily go for the more cutting-edge designs. The company is also working more closely with licensees for a more unified vision across all categories.

Ron Frasch, president and chief merchandising officer of Saks Fifth Avenue, said he is very “encouraged” by Saks’ recent Donna Karan business, with a solid spring and fall and “outstanding” resort season. “They got through some tough times and they’re clearly emerging out of a tough period with a return to all the design integrity that Donna built the foundation of her business on,” he said.

Frasch added that Saks is in the process of building Karan’s business again. “We just opened a new boutique in our Beverly Hills store and are creating a new space in New York that is still in development, and we’re looking at additional doors,” he said.

Frasch saw some of the handbags earlier in the week and was “very pleased” with the results. “They put together a terrific team and, along with the creative team, have listened to their customers, with hardware, materials and color and a sophistication.”

Averyl Oates, buying director of Harvey Nichols in London, echoed the sentiments. “Our Collection business in the U.K. is extremely buoyant, particularly in London, where we have experienced a 45 percent uplift in sales in 2007 versus 2006,” she said, adding that, from a sales point of view, collections like Gold and Icons have been highlights. “Our commitment to Donna has certainly increased over the past year to 18 months with more purchases in these core businesses such as Gold and Icons.”

Weber said that part of the uptick in Collection has been based on having shifted the company’s reliance from just runway pieces to other lines. “The mix of what goes down the runway and some of the new launches [i.e., Gold and Icons] has changed the tenor of our business dramatically, and we are appealing to a woman for a broader base of her choices and her needs,” Weber said. “A significant portion of our go-forward strategy in 2008 is in products that did not exist in 2007.”

Enter accessories. For Weber, making the category a commercial hit is a top priority, and a success is sure to determine his performance rating within LVMH. “LVMH understood and encouraged us to be in the accessories business,” Weber said. “The only criteria they had and we share is that we would not compromise anywhere, that we would hire the best people and find the best resources.”

Like many other American fashion houses, Karan has struggled to make a mark in accessories since launching her company 24 years ago. She has had a capsule assortment almost since the beginning, but the category was always treated as such — embellishments to the rtw business without any formal business strategy or infrastructure for growth. In 2004, DKI made a more concerted effort at launching handbags. While the launch seemed stellar, it appeared the financial support necessary to firmly establish and grow such a business were absent, with inadequate staff additions made in merchandising, design and the supply chain. At the time, it seemed the company didn’t realize that accessories needed to be treated as a stand-alone business.

“The key to a successful accessories business would be to take a creative breeze from Donna, which could then be independently worked and developed into a collection, separate and apart from the rtw, even if it may coordinate into it,” an industry source said.

Previously, Karan was also said to be overly involved in their production — which sometimes helped and at times hindered the business, which petered out quickly.

“Last time, it was about the ‘It’ bag,” she said. “It was about fashion as opposed to the culture of the company. Because bags were such an integral part of who we were in the beginning, it’s almost like we are back to the moment when we started.”

Plus, she admitted, there were technical problems, issues with factories and a lack of infrastructure to support the launch.

“We set out to create a collection that is reflective of the Donna Karan philosophy,” Sanders said. “It’s a respect for the woman, honesty in design. The customer is strong, intelligent, sophisticated, yet feminine. I took direction from that. The shapes are sexy, the leathers are supple and soft, the hardware is sculptural and beautiful. It’s not clunky but substantial.”

Despite LVMH’s resources, DKI sourced production through its own factories, tanneries and hardware factories around Florence. “A lot of the bags were made by the first people I ever worked with when I was at Anne Klein, so it’s also a story of reconnecting to the beginning,” Karan offered.

The handbags wholesale from $390 to $1,100 for leathers; $350 to $2,550 for evening clutches made of satin, napa, Orylag fur or python, and $970 to $12,320 for exotic skins. The collection will be sold in freestanding Donna Karan Collection stores worldwide, and is being made available to upscale specialty stores and department stores worldwide. Weber declined to give sales projections for both Collection apparel and accessories.

As for Karan herself, her personal favorite bag is the Leo one. “This will travel with me. It’s for a woman on the go,” she said.