What makes an icon? For Donna Karan, the answer is in three simple words: seven easy pieces. 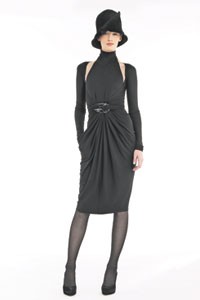 NEW YORK — What makes an icon?

For Donna Karan, the answer is in three simple words: seven easy pieces. The concept has been synonymous with the designer since she launched her first collection, and with her newest line, Donna Karan Icons, she’s looking to drive that message home again.

Karan is literally going back to her roots: the system of dressing and the seven easy pieces to do it with.

The idea to launch Icons came to Karan as she was creating a special Gold capsule line for this past resort season in conjunction with the launch of her most recent women’s fragrance, Donna Karan Gold. To mark the occasion, she designed pieces that harkened back to her signature silhouettes, with black jersey jumpsuits, slinky jersey dresses and other quintessential Karan pieces accented with hardware elements by longtime collaborator Robert Lee Morris.

That Karan should be reinstating some of her core values with Icons should be music to the ears of retailers and women, who in recent years have lamented that the designer had turned her back on her roots when she discovered spirituality and travel.

Karan’s seven easy pieces concept was launched with her first collection in 1985, based on a system of dressing that addressed women’s needs with versatile clothes that worked from day into evening, depending on how women chose to mix and match them. The system evolved around a luxurious bodysuit, a wrap skirt, tailored jackets, tailored pants, wrapped cashmere knits, a robe like a coat and an eveningwear piece. Karan is the first to admit that women kept on telling her they missed those clothes.

“Women keep on saying to me, ‘Where did you get that coat?'” Karan said, sitting on a curved Zaha Hadid bench in her 10th Avenue showroom that houses her home line. “I would say, ‘It’s mine,’ and they would respond, ‘From where? I didn’t see it.’ And I’d have to tell them it’s a few years old. And then, this year, when I found myself wearing so many of the Gold pieces, I loved it because I didn’t have to think twice about it.”

Icons evolves from key Donna-isms, like stretch, jersey, draping and sculptural details such as hardware or wiring inside coats. For instance, there is a long-sleeved wool jersey cold-shoulder neck-wrap and tie dress with a sculpted element; a taffeta trenchcoat with an organza liner, a double-faced cashmere coat with wiring and a wool jersey floor-length wrap and tie gown with a cold shoulder. The pieces in the new collection are so central to Karan’s design vocabulary that they can easily be worked in with any Collection piece.

“When you think of Donna Karan you think of the cold shoulder, you think of wrap-and-tie, whether it be a bodysuit or a dress, and the quintessential jacket,” she said. “If you had just this, you would have a balanced group of iconic Donna Karan Collection pieces.

“This is who I am,” she added. “It has lasted the test of time. It’s as new today as it was then. For me, that is pretty amazing, because I am still wearing them as if I had just done it today for the first time. It feels as right today as it did then.

“I did not want to be known as just a cashmere sequin designer or a hosiery designer, there was more to the system,” she continued. “I said, ‘That’s not just what we’re about.’ So it was reinstating the core essence of what Donna Karan is.”

Talking through the collection, Karan tried on a coat here and a wrap there to illustrate the ease of her system.

“The system is always there. It’s how I design, I can’t help it,” Karan said. “It’s ‘What’s the skirt, what’s the jacket, the top, the this or the that?’ Every season, I do the seven easy pieces. It’s just the way I design. This is based on your DNA, this is who you are. It’s wrap-and-tie, it’s jersey and it’s black, and it works as a full wardrobe.”

She plans to update Icons each season with the times, but has no intentions of radically altering the philosophy.

“It’s like a Mercedes,” she said. “You don’t start a Mercedes all over. It can’t be anybody else’s but yours.”

Donna Karan International is planning to market Icons separately from Collection with plans for a direct mailer in partnership with retail stores. Karan said she expects stores to buy the line as a group to underscore the message of the system of dressing.

This is also the first major initiative with Mark Weber at the helm of DKI. He joined the company as chairman and chief executive officer of Donna Karan International last October and also holds the title of ceo of LVMH Inc. U.S. DKI’s parent is LVMH Moët Hennessy Louis Vuitton.

“The company is about to invest a lot of time, money and effort in making Donna Karan as special as we believe it should be,” he said. “This is the beginning of relooking at the business from the ground up, the way the company was built, with core pieces that are very special. They have the ability to grow in terms of volume to the total business.”

Weber wouldn’t disclose the sales potential of Icons, but said, “The opportunity for growth is extraordinary if the product is right and we put the marketing dollar behind it. The reception to the brand and the eagerness for product categories, more core, more open-to-buy and more real estate, has been there.”

The distribution strategy mirrors that of Collection, which is sold worldwide in upscale stores such as Neiman Marcus, Saks Fifth Avenue, Bergdorf Goodman and Nordstrom. Icons is expected to reach stores in May and June. In freestanding Donna Karan stores such as the flagship on Madison Avenue, there will be separate areas highlighting Icons. Its pricing is in line with that of Collection, with suggested retail prices expected to be in the range of $595 to $2,995.

“There is no difference in the strategy of price points — this should live within our world,” said Carole Kerner, president of the Donna Karan New York collection. “The Gold concept had tremendous success. Customers were reawakened about Donna Karan.”

For Karan, it’s clearly one more way to set herself apart from other designers.

“It doesn’t look like Calvin, like Ralph or Armani, it looks like Donna Karan,” she said. “It’s what everyone searches for in a brand. It’s like when you walk through an art exhibition and you could pick up a Modigliani or a Picasso and know the hand of the artist was there.”