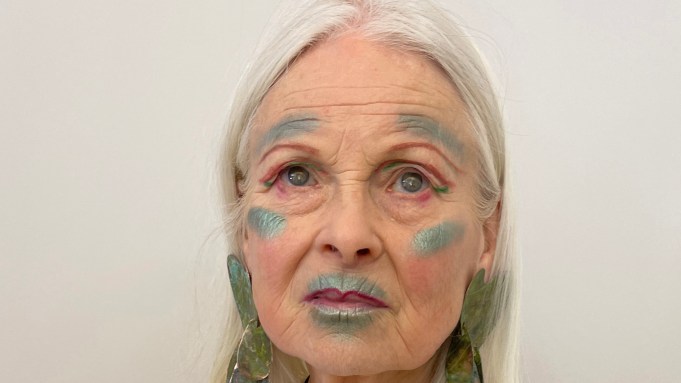 LONDON — Vivienne Westwood is marking her 80th birthday with a string of social and environmental warnings and a short film in which she sings a rewritten version of “Without You” from the musical “My Fair Lady.”

Age has not dimmed the designer’s activist passions, her determination to challenge the status quo — or her innate elegance. A portrait photographed by her husband Andreas Kronthaler shows her bright-eyed, vibrant and ethereal, with long white hair and sea green face paint.

To mark her big day, Westwood worked on a film with Circa, which commissions a different artist each month to create a new work for Europe’s largest screen in London’s Piccadilly Circus. Westwood’s work will appear at 20:21 local time on Thursday.

London remains in full lockdown, so those who cannot make it to Piccadilly Circus on Thursday night can also watch the 10-minute film, “Do Not Buy a Bomb,” online on Circa.art.

Her performance of “Without You” is an encore. She sang the same song for her fall 2021 collection film, which debuted last month.

As reported, she and her husband put a kooky spin on “My Fair Lady,” tapping an international band of models and performers to show off a collection that nodded to Eliza Doolittle’s flower stall and to the musical’s romantic score.

In the show film, the glamorous Westwood performed an impassioned version of the song pressed against the window of her newly refurbished Mayfair store, while Kronthaler and the model Malik Sharpe stroll around Mayfair singing “On the Street Where You Live.”

In the film for Circa, Westwood warns of society’s indifference to what she sees as looming environmental catastrophes. She decries the arms trade and its links to climate change, and ponders an England without people.

In a written message that appears in the film, Westwood says, “I have a plan 2 save the World. Capitalism is a war economy + war is the biggest polluter, therefore Stop War + change economy 2 fair distribution of wealth at the same time.”

She calls on people to “stop arms production + that would halt climate change cc + financial Crash. Long term this will stop war…by talking U will support me in the fight. One day soon U will say the right thing 2 the right person at the right time, make a difference. I have always combined fashion with activism: the one helps the other. Maybe fashion can Stop War.”

She also tells viewers “Don’t buy a car,” “Don’t buy a bomb!” “Get a life!” and to follow her on Climaterevolution.co.uk. Westwood highlights the Campaign Against Arms Trade, a U.K.-based organization.

A limited-edition print titled “Do Not Buy a Bomb” designed by Westwood in support of the #CIRCAECONOMY is available to buy for 100 pounds on the Circa website.

Josef O’Connor, founder and artistic director of Circa, noted that Westwood has a long history of addressing issues including climate change, civil liberties and nuclear disarmament.

“Provoking others to think afresh and to reflect or consider their own actions, we are honored to provide a platform to this British icon on the Piccadilly Lights screen and celebrate her 80th birthday in style,” he said.

Circa streams its commissioned artwork every evening at 20:21 BST and hosts new content alongside past archives of work from artists including Patti Smith, Tony Cokes and Ai Weiwei.

The Circa film is Westwood’s first major public appearance since last summer when she staged a publicity stunt to support the plight of Julian Assange, the founder of WikiLeaks whom the U.S. wants to extradite for alleged espionage.

Dressed in a sharp-shouldered canary yellow trouser suit and black combat boots, Westwood voiced her support for Assange from inside a giant birdcage that was suspended 10 feet off the ground in front of London’s Old Bailey criminal court.

Megaphone in hand, she protested against “the illegal U.S. extradition of Julian Assange for telling the truth about American war crimes.” A banner in front of the cage read “I Am Julian Assange.”

Earlier this year the U.S. government appealed a U.K. judge’s decision not to extradite Assange. The U.S. wants Assange to stand trial on espionage- and hacking-related charges by WikiLeaks.