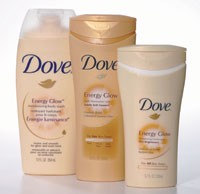 NEW YORK — It appears that women find Dove’s honesty refreshing. Since launching its Campaign for Real Beauty more than a year ago, Dove has reaped double-digit sales growth and plans to do the same in 2006.

The gains have pushed the Unilever brand past the $1 billion mark in U.S. retail sales — a feat Dove accomplished in June, said Philippe Harousseau, director of skin care for for Dove U.S. What makes that milestone even more remarkable is that five years ago Dove was a $500 million brand. The ambition now, said Harousseau, is to repeat that sales performance.

Of course, as Harousseau will tell you, Dove has a history of championing everyday women — one that dates back 50 years to the brand’s inception as a cleansing bar.

Armed with women’s approval, this year Dove plans to aggressively grow sales by introducing platforms — a collection of products across multiple categories — rather than a few items at a time. It’s a strategy that emerged from the introduction of Dove’s Cool Moisture range last year.

Since the launch of the Cool Moisture body wash and beauty bar, Dove has added facial cleansing cloths to the line and this spring will introduce Cool Essentials deodorant.

“We saw the power that several concepts had across multiple categories,” said Harousseau, referring to the success of platforms such as Cool Moisture. Harousseau added that Dove could extend a concept across a range of products.

This spring, the personal care brand will introduce its first fully fleshed-out platforms to the marketplace. Dove has three planned for the first half of 2006 — Energy Glow, Calming Night and Advanced hair care. The spring assortment also includes Skin Vitalizer, Dove’s first foray into appliances; a new deodorant line called Ultimate Clear, and a host of revamped products.

Dove will support each new platform with separate advertising that spotlights star items.

The brand will challenge one of the most successful launches in the mass skin care category last year, Jergens Natural Glow, with Energy Glow, a range of 10 items designed to enhance skin tone.

In addition to a color-building daily moisturizer, available for light and medium skin tones, the lineup includes a beauty bar and body wash. Dove repositioned its antiaging skin care line, Fresh Radiance, to be included in the Energy Glow range. The repackaged and expanded assortment will include Energy Glow Brightening Eye Cream With SPF 8, Brightening Night Cream, Brightening Facial Moisturizer with SPF 15, Cleansing Pillows and Brightening Facial Cleanser. Prices range from about $3 for two beauty bars to $10 for the night cream.

Harousseau noted the success of other “glow” products in the marketplace, but said, “We’ve been working on the concept of glow for many years, and we’ve realized that it is multidimensional.” He added that Energy Glow goes beyond self-tanning, and includes light reflection, enhanced skin tone and antiage elements, given that mature skin can look dull. The beauty bar and body wash are important, said Harousseau, because healthy, glowing skin starts with gentle cleansing. The body wash is said to remove 60 percent of dry skin cells during one shower.

He noted the use of the word “energy” is meant to communicate what women feel when they have a natural glow.

“The nighttime is a real opportunity to create a new cleansing and caring routine,” said Harousseau, adding Calming Night is based on two factors: The shower is likely the only place where a busy mom, whom Harousseau called “chief everything officer,” cannot be disturbed, and, according to the National Sleep Foundation, a nighttime shower is a good way to prepare for a good night’s sleep.

The habit purportedly has beauty benefits, as well. The skin’s cell renewal process is twice as fast in the wee hours.

Last year, Dove introduced the range to Europe, where women are more likely than in the U.S. to bathe at night, according to Dove’s market research. Prices range from about $3 for beauty bars to $8 for the Regenerating Night Lotion.

Dove’s third platform, Advanced, seeks to usher its two-year-old hair care business into the treatment realm — an area dominated by professional and salon-inspired brands. “Retailers are focused on premium hair care lines,” said Piyush Jain, brand manager, hair for Dove. Treatments, he added, are the next way to grow the market.

Jain acknowledged that mass market hair care sales have been relatively flat over the last three years, but said innovations from Dove and its competitors will jumpstart growth by mid-2006.

Advanced includes Dove Advanced Color Care and Advanced Care. Each moves Dove into a premium price range of $5.99, up from its traditional $3.99, and marks Dove’s departure from its signature white-and-blue packaging.

“It doesn’t matter what the final color of your hair is,” said Jain. “What matters is whether you’ve lightened or darkened your hair.” In Jain’s view, a host of hair care manufacturers have falsely lead consumers to believe that they should choose products based on their hair color. Dove plans to disprove that notion with two collections, Lightening Effects and Darkening Effects. Lightening Effects, housed in light mauve bottles, is designed to replace proteins lost by color-stripping processes like highlighting. In addition to a shampoo and conditioner, the collection includes a Reviving Mask to strengthen hair and prevent split ends, and Leave-in Luminizing Mist, designed to detangle hair and add shine.

Darkening Effects, housed in dark mauve bottles, also includes a shampoo and conditioner, as well as Radiance Enhancing Treatment packaged in five ampules, each one intended to be used once a week.

Dove executives explained that women who color their hair at home are familiar with such conditioning treatments, but that this product makes them easier to use.

To break through the clutter of color-specific hair care lines, Dove will launch a comprehensive marketing campaign that will filter into the stores.

“The entire strategy is about education,” said Jain, who explained that ads will feature twins born with the same hair color. One has dyed her hair a darker color and the other has highlighted her locks, and both turned to Advanced Color Care lines, said Jain.

Advanced Care seeks to treat two levels of damaged hair with two sublines, Sheer Moisture for minimal repair and Therapy for overly processed or chemically treated hair. Both include a shampoo and conditioner, and one treatment, Sheer Moisture Leave-In Replenishing Mist and Therapy Repairing Treatment. Each item is $5.99.

The ad campaign for Sheer Moisture and Therapy plugs into Dove’s Campaign for Real Beauty, and features women of various ages in a range of hairstyles — from traditional to punk.

TV and print ads, slated to break in March, will play on the theme that “all damaged hair is not created equal.”

“The ad execution is a prime example of a brand living up to its value that beauty comes in different shapes, sizes and ages,” said Harousseau.

In the midst of these launches, Dove will enter the small appliances realm with Skin Vitalizer, a cleansing tool designed to work with Dove Cleansing Pillows. The battery-operated device, which will sell for $9.99 to $11.99, includes a six-pack of the pillows and will be merchandised in the implements aisle.

“For us, it’s a rule-breaking introduction,” said Harousseau, adding that Dove has been focused on cleansing since the brand’s inception. He added that the move into implements was spurred by the growth of at-home spa products and consumers’ growing fondness for tools that mimic those used in professional beauty treatments.

When placed under hot water, the pads puff up and the Vitalizer gently cleans and exfoliates the face. Women no longer need to hunch over the sink to clean their faces, quipped Harousseau.

The remainder of Dove 2006 launches are a repackaged hairstyling line, with new frizz creams tailored to hair type, and a new deodorant collection called Ultimate Sheer. The premium-price deodorants, which will sell for about $3 each, promise not to leave “white marks” on clothing.

Ads spots, scheduled to break in February, challenge women to go “inside out” after applying Ultimate Sheer — to turn their shirts inside out and see that the deodorant did not leave white stains, explained Kevin George, director of deodorant for Dove.

Despite the onslaught of launches planned for 2006, Harousseau said Dove has kept its commitment to use the appropriate technology to cater to consumer needs. He said, “We understand what women are looking for.”