Down, Shearling Tops in Shops

Down jackets and shearling coats are repeat winners in this year’s outerwear derby, based on a spot check of retailers in various locales. 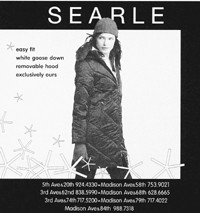 NEW YORK — Down jackets and shearling coats are repeat winners in this year’s outerwear derby, based on a spot check of retailers in various locales.

They led the charge in a mostly upbeat season, where cold and stormy weather has generally spurred sales in the category, although some of the snow came at inopportune times. There was some disappointment seen in wool coats and traditional rainwear, merchants noted.

Steve Blatt, founder of Searle, a seven-store operation, said down coats from Moncler, Postcard, Searle and Bogner have been bestsellers. Shoppers have been buying basic and fur-trimmed styles in the $300-$400 range, as well as in the $700-$1,200 range.

“Down is the major category. All down sales are outstanding,” he said. “The wool coat business has picked up a bit, but on promotion.”

For the most part, Searle is steering clear of markdowns, opting to advertise its full-priced goods. An ad in Sunday’s New York Times Magazine featured a $700 Moncler down coat. The company will probably continue to advertise until the end of the month.

“January is an even bigger month than December. That may not be true for department stores, but it is for us,” Blatt said. “February is close behind.”

Despite that, the company is trying to make up a bit for lost ground due partially to last month’s stormy weekend weather in the Northeast.

“In outerwear, the weather is the distinguishing factor, and we have no control over the weather,” Blatt said.

Last weekend in Aspen, Colo., a winter storm dropped 3 feet of powder on the slopes and that sent consumers scurrying inside ski shops for outerwear. At Gorsuch Ltd., a seven-unit high-end boutique and mail-order business that combined for $30 million in sales, women bought classic down jackets, from $700 to $1,500, in white, pink and red. Other hot sellers included nylon all-weather jackets from Postcard, shearling coats from a variety of vendors and cashmere corduroy jackets by Loro Piana for Bogner.

Co-owner Jeff Gorsuch said outerwear resources are doing a better job of combining fashion with functionality. A denim jacket, for example, has the chops for a day of skiing.

“We’ve sold ski jackets by the thousands this season,” he said, noting sales in the category have made single-digit gains compared with last year due to the weather and an overall perception the economy is improving. “This has been a great year.”

“The big story is print and military,” said co-owner Steven Shane, pointing out army green, scout brown and patches are popular. “The kids want to rock what the pro riders for Burton are rockin.’”

Analog by Burton and Volcom have been among the best-selling labels, selling for around $450. Shane’s outerwear business shot up 30 percent this season compared with last, because of “great” snow and people’s willingness to travel, he said.

Neiman Marcus has had “good” outerwear business last month, driven by sporty styles and shearlings, according to Terry Thornton, vice president and divisional merchandise manager of coats, furs and bridal.

“The biggest shift in our trend is the interest in sportif looks, which has continued through Christmas to be stronger than anticipated,” he pointed out. “Our Burberry resort had a 50 percent sell-through in three weeks. Even cloth coats have to be geared to the sporty customer.”

Colorful bomber jackets by Andrew Marc have also excelled in resort selling, said Thornton, who expects shearling to continue to be a big force next fall.

“Shearling has become the mink coat of today,” he said. “The traditional cloth coat was the weakest link. There were no disappointments, but the cloth coat needs some reinvention as far as styling.”

Thornton feels the biggest need is for a clean, elegant raincoat that retails from $400 to $700 and is not a trench. “It sounds simple,” he said, “but you don’t find it.”

Thornton spoke from Neiman’s Last Call outlet at Sawgrass Mills near Fort Lauderdale, Fla., where he was working a trunk show of 550 furs that is slated to visit eight of the chain’s 12 outlet stores.

“The higher-priced, real furs did not do well,” said Victoria Jackson, owner. “Since the trend is toward novelty coats, I’ll probably buy more of them at less expensive prices next year.”