Down to the Wire on Rodeo Drive

BEVERLY HILLS — Talk about a nail-biter. Only a week before the holiday shopping season shifts into high gear, workers here are trying to wrap up construction that has crippled traffic in this city for the past three months. 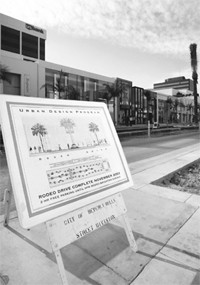 BEVERLY HILLS — Talk about a nail-biter. Only a week before the holiday shopping season shifts into high gear, workers here are trying to wrap up construction that has crippled traffic in this city for the past three months.

Since August, workers have been up nights — all work is done between 10 p.m. and 6 a.m. — widening sidewalks and central medians, creating midblock crossings, replacing ficus trees with palms and carving out parking “pockets” instead of metered areas within the 300 and 400 blocks of Rodeo and Beverly Drives.

Construction has sped up from five days a week to six, and, according to David Lightner, deputy city manager of Beverly Hills, “things will be buttoned up before Thanksgiving” even as retailers, who’ve suffered as much as a 25 percent drop in business caused by the mess, cross their fingers.

It’s all part of an $18 million program the Rodeo Drive Committee has spearheaded in conjunction with the City of Beverly Hills and the Chamber of Commerce to make the area more pedestrian-friendly and, ultimately, more profitable. The second phase of construction, slated to begin in January, will tackle the 200 blocks of Rodeo and Beverly as well as side streets Canon Drive and Dayton and Brighton Ways.

“The worst is behind us,” said Randy Soto, salon manager of Harry Winston and president of the Rodeo Drive Committee, who took over the title from Peri Ellen Berne in October. The topic of improvements has been debated by property owners, retailers and city officials — all contributing to the bill — for more than a decade. Most believe it will add to the 12 million visitors who stroll the promenade and spend $1 billion each year.

“We feel that the construction, as with the introduction of the Walk of Style and Robert Graham’s Torso, makes the fashion industry here come alive and gives visitors a sense of curiosity and excitement,” said Soto.

Even as the jackhammers started their incessant clatter, Giorgio Armani came here to receive the first Rodeo Drive Walk of Style Award in September, a high-profile red-carpet affair that drew A-listers like Harrison Ford, Jodie Foster and Sophia Loren. The award was created by the committee to honor designers and style legends — living or deceased — for their contributions to fashion and entertainment. Plaques are embedded in the sidewalks featuring the award winners’ quotes and signatures. Sources speculate as many as 30 plaques could one day dot the drive, making it a tourist draw not unlike Hollywood’s Walk of Fame. Graham’s 14-foot aluminum nude female torso that towers over the 200 block serves as the program’s symbol.

“Every off-road vehicle shifted into four-wheel drive to get from Wilshire to [Little Santa Monica],” said a West Coast spokeswoman for Armani, recalling the state of the street when the designer was in town. “But we can survive it. I think it will be worth the dust.”

But humor has eluded some retailers, especially now that they are spending 20 percent more than they did a year ago on annual rents averaging $264 a square foot, according to a recent study by New York real estate firm Cushman & Wakefield. Ripped-up sidewalks prevented easy access to most stores, and impossible traffic jams caused by two lanes narrowing to one have made the district a place to avoid.

“I think there was a little panic in the middle of the project,” noted Chuck Dembo, a partner at local real estate firm Dembo & Associates, who handles many leases on the drive. “Merchants and managers were e-mailing photos back to their corporate offices so they wouldn’t get heat about any lowered sales.”

Marco Pievani, general manager of Etro North America, who recently signed a lease for a 2,400-square-foot unit at 461 Rodeo Drive for the Italian firm’s third boutique in the U.S., said several store executives he spoke to were “all complaining. Some days they said there was not a soul walking into the store. But it didn’t scare us. We knew that it was temporary.” Etro is expected to pull in $4 million in first-year sales, he said.

A walk down the street confirmed the reports. “We’ve been affected 10 percent,” lamented one salesperson at Valentino. A rep at Prada characterized business as “slightly down,” while another at BCBG Max Azria relayed, “It’s been awful to business. What were they thinking? It’s a total waste of money.”

Herbert Fink, owner of Theodore, got hit with a 15- to 20-percent decrease during construction.

“Fortunately, we have parking behind our store,” he said. “If we didn’t, we’d be out of business.” Fink, whose 30-year-old store is among the oldest and one of the last locally owned units on the drive, was never an advocate of the change. He is not enamored of the tall palms replacing the shorter, lush ficus trees and said the street now looks “bare.”

But others believe the facelift will be a boon to business. If traffic increased only 6 percent, noted one analyst, it would be worth the $18 million expenditure. “That’s not super-aggressive, top-line growth,” she said.

“Rodeo Drive has always been a destination for shoppers in Beverly Hills, but frankly, it needed a makeover,” said Massimo Ferragamo, chairman of Ferragamo USA, which operates a unit on the street. “It is always a challenge to continually surprise and attract new, lapsed or infrequent shoppers, and provide them with a reason to visit. We’re confident that the improved aesthetics will reinvigorate the district.”

Harry Winston’s Soto, too, is convinced, and believes the negative comments will subside along with the dust and the pounding of the hammers. “We knew this wasn’t going to have an immediate impact on business,” he said, “but be a long-term commitment to the city and to retailers.”