All the world was a stage for Los Angeles designers, drawing influence from everything from Spain and theatrical Twenties to gritty rock 'n' roll. 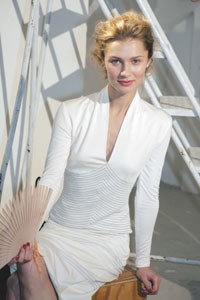 Morphine Generation: Hipsters and rock ’n’ rollers, including Anthony Kiedis and Rancid’s Tim Armstrong, came out on Saturday night for Eric Hart’s Morphine Generation show, which ended with a gritty performance by the designer’s own band, the Suicide Kings. Hart’s spring collection featured 15 looks, including fitted polo shirts and blazers decorated with his signature silk-screen crest, as well as other new rocker-esque graphics. Fun additions to the line included tailored slim shorts and a fitted, cropped peacoat. The toile ballerina skirt, however, seemed out of place, and way too prim alongside the rest of his roughed-up collection.

Carlos Rosario: Carlos Rosario presented his mostly Spanish-influenced second collection in a small downtown art gallery. It featured dramatic, black-and-white evening pieces with a slightly theatrical Twenties flair, such as the intricately pin-tucked, black matador-like capris worn with an off-the-shoulder, ruffled white pointelle blouse. There were also retro-nautical pieces consisting of day dresses and separates — the expertly constructed silk linen sailor suit with a navy polkadot yoke, for example, seemed fitting for a yachting trip in the Forties. Overall, the collection was luxurious and dramatic, showing off the designer’s excellent tailoring skills, but occasionally the vintage-style elements, such as the fitted boleros, flounces on denim skirts and the crystal trim, were a tad too costume-y.