Designers in Paris staged quite a spectacle, with everything from tomboyish suits to Forties-esque lace dresses playing starring roles. 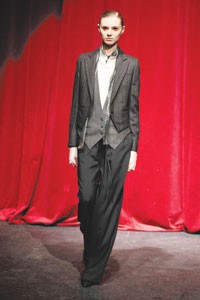 Designers in Paris staged quite a spectacle, with everything from tomboyish suits to Forties-esque lace dresses playing starring roles.

Veronique Branquinho: The alternative Belgian duo of Gregory Frateur and Nicolas Rombouts of the band Dez Mona have inspired audience reactions that range from disgust to admiration for their unique take on gospels and spirituals. And their live performance during Veronique Branquinho’s show was at times enchanting and at others annoying — somewhat like the collection. The presentation opened with an oversized gray flannel topcoat over pants, setting up the men’s wear theme that was to follow. A vest became a loosely fitted halter over a classic shirt; shrunken tailcoats were paired with ruffle-front tuxedo blouses and corset belts, all shown with slouchy trousers. Branquinho’s tailored message was manifest, but then she sent out a brown paisley velvet granny dress. And she continued to intersperse more feminine fare — panne velvet dresses and skirts, bib-front shirtdresses and some deconstructed lace pieces — with her tomboy looks. While Branquinho’s intent may have been to add another dimension to the collection, the girly pieces actually detracted from her strict, somber message, which better fits the mood of this season.

Loëwe: Designer Jose Enrique Ona Selfa took Loëwe’s leather heritage for a walk down memory lane, mining the Sixties à la Courrèges in a poppy collection that offered some fine skinny trousers, jackets and easy knit ensembles. Ona Selfa has developed the Spanish house, giving its ready-to-wear more legs with straight-ahead sportswear while gassing up the accessories business (the real money maker) with zippy bags. He kept a firm hand on the tiller for fall. Leather pieces abounded — most with a Mod slant — while leather bows decorated wool dresses. A couple of slinky catsuits provided the sexier stuff and, on a softer note, a handful of embroidered yellow chiffon confections gave the whole more depth.

Issey Miyake: Cultural mélange and architecture underscored Naoki Takizawa’s soft and poetic vision for the Issey Miyake brand. So it was appropriate that he chose to show in a soaring foyer in the nearly complete Quai Branly museum that will showcase African, Asian and American art when it opens later this year. (Takizawa has been asked to design huge curtains for the Jean Nouvel-designed space.) Form-fitting leather chest plates, worn with trousers and skirts embossed with ethnic patterns, opened the show and led into Takizawa’s exploration of the trenchcoat (his has a jagged-cut back flap), and dresses and jackets decorated with colorful fringes of mountain climbing rope. Fabric innovation is another of the designer’s calling cards, and a colorful vegetal print and a traditional kimono-inspired pattern were strong examples of that talent. Sporty elements — parachute pants, blouson jackets and parkas with fur hoods — brought a touch of the street and rounded out Takizawa’s ethereal world.

Requiem: Young designers Julien Desselle and Raffaele Borriello are confidently carving a niche for themselves with their Requiem collection, which melds a couture sensibility with youthful energy. In their second season, the duo elaborated on their elegant and sexy evening gear, adding more knits, tops and coats. “We’re still inspired by the Forties,” explained Desselle. That meant balloon-shape black velvet skirts, high-waisted skirts paired with diaphanous lacy tops and a high-waisted, red Gazar evening confection decorated dramatically with black lace. If the two keep it up, they may prove to have what it takes to stick around awhile.