Dresses to the Rescue: Save Otherwise Safe, Chaotic Milan Season

After an underwhelming Milan season, the dress emerged as a savior and lifted retailers spirits about the feminine, if safe, direction for spring. 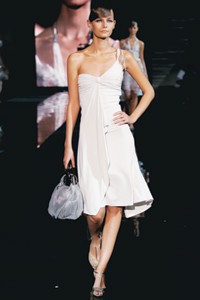 MILAN — It’s hard to be angry at pretty dresses.

After a grueling, controversial and often-underwhelming Milan season, that key item cheered retailers, many of whom left the Italian fashion capital with a positive assessment about the feminine, if safe, direction for spring-summer.

“It was a good, solid week with good commercial pieces,” said Robert Burke, senior vice president of fashion at Bergdorf Goodman. “I thought Milan was much more feminine and refined than it has been. We saw a lot of beautiful eveningwear.”

“It’s fresh, young, less tailored, more romantic and more interesting than it’s been in a long time,” he said. “The dress was a big Milan statement, along with the color white and white mixed with cream.”

But a compressed schedule, with six days of shows crammed into five, made life difficult for buyers and contributed to the general feeling that the Milan week demanded a lot of effort for little fashion news.

“What I didn’t like was the schedule and the fact that some things were double booked,” said Joan Kaner, senior vice president and fashion director at Neiman Marcus. “We spent more time in traffic going [from] location to location than seeing clothes. It’s such a poor use of our time. It wasn’t a revolutionary season, but spring never is.”

Anna Garner, fashion director of Selfridges, said, “It was a bit flat overall. The main focus for the week was understated simplicity — soft, light and fresh but very understated, except for Dolce & Gabbana.”

Other collections that buyers said stood out included Prada, Fendi, Etro, Versace, Marni, Roberto Cavalli and Burberry Prorsum. Here’s what they said about a divisive week: