Consumers are beginning to once again buy dressier fashions as COVID-19 restrictions ease, both G-III and Destination XL said Thursday.

Halsey in a DKNY ad campaign.

Americans are starting to dress up again.

As states, for better or worse, continue to ease coronavirus restrictions, vaccination rates increase and more workers begin to slowly return to their offices, apparel brands and retailers say there is growing evidence consumers are starting to ditch the uber-casualwear that became their uniforms over the last year and opt for dressier fashion. On Thursday, both G-III Apparel Group Ltd. and men’s wear retailer Destination XL pointed to the trend as a sign for optimism that sales of clothes might spike in the months ahead.

Morris Goldfarb, chairman and chief executive officer of G-III, said the firm has already begun to see a return to dressier fashions, including dresses and “career wear.”

But he doesn’t expect the pendulum to swing completely away from comfort. At the same time, Goldfarb said he expects G-III’s jeans category to grow to a $250 million business, while the company continues to home in on the athleisure segment.

“I think there will be a large spike up in demand for what you would call dressy clothing,” Goldfarb told WWD on Thursday as the company reported its fourth-quarter and year-end results. “We see it coming. We’ve seen it coming for the last few weeks. There seems to be a pent-up demand in some of the classifications we were worried about. So there is hope.”

While Harvey Kanter, Destination XL’s president and CEO, said casual sportswear and loungewear continued to drive the men’s wear retailer’s business in the fourth quarter and tailored clothing “remained extremely challenged,” he added that the company in recent weeks has seen an “uptick” in sales of tailored clothing, particularly sports coats and dress shirts.

Kanter cautioned that it “is still very early in the year and we certainly have a long way to go. But the early signals that we are seeing in 2021 are pointing toward a recovery in stores as the restrictions around gathering are eased and our customer feels more comfortable venturing out from his home. We remain cautiously optimistic, and we are monitoring to see if the pent-up demand will wane or carry into summer and even the fall and winter months ahead. We do recognize that the savings rate of the U.S. consumer is up measurably and another round of stimulus checks is beginning to hit banks now. Given this conversation, the roaring ’20s and celebratory times ahead may be very real.”

Kanter is only one of many who are predicting a “Roaring ’20s” once vaccinations are widespread and consumers are able to return to some sense of normality at home and at work. U.S. households saved more than $1.5 trillion during COVID-19 than they normally would, and many observers believe all that cash will be spent once consumers feel safe — on vacations and dining out, not to mention clothes to wear for both. The Federal Reserve on Wednesday revised its growth rate for the U.S. economy up to 6.5 percent, which would be one of the fastest rates in decades.

All of that is only good news for brands and retailers that have had to rush to produce or carry the casual clothes that have been the norm for the last 12 months.

“We enter fiscal year 2022 in a good inventory position, which is weighted toward casual product that remains in high demand,” Goldfarb said. “As the year progresses, we believe there will be an increasing desire for dressier apparel and accessories. We are working closely with our retail and vendor partners to be in a position to bring these products to market in a timely manner. Our strong financial position and liquidity enables us to continue to fund our operations, as well as consider acquisitions.” 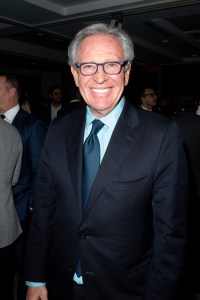 The firm, parent to the DKNY and Donna Karan brands, among others, revealed quarterly and full-year earnings, falling short on both top and bottom lines. Yet company shares still shot up 3.4 percent to $32.44 on Thursday thanks to improved sales expectations for the current quarter.

“Our entrepreneurial culture, with a merchant-led focus, proved to be invaluable as we responded to the casual trend by designing the right merchandise for our retail partners,” Goldfarb said in a statement. “We further elevated our position as a key supplier of choice for a broad range of apparel and accessories. We ended fiscal year 2021 with continued improvement in our wholesale operations and completed the restructuring of our retail operations.”

G-III is an example of how both vendors and retailers have had to reinvent themselves over the last 12 months, often on the fly. But the changes put into place are, in many cases, here to stay even as Americans begin to sense some relief that the darkest days of COVID-19 may be behind them.

“Casual is in replenishment [mode]. That’s a given,” Goldfarb said of current trends. “We were important [in athleisure] pre-pandemic. We took some of the skills and fabrications that we found successful in one or two of the brands that we’ve had and we’ve transitioned the knowledge, the fabrics, the vendors and the accounts into three or four brands. The jeans category lends itself perfectly to casual and comfortable fashion and enables us to negotiate some prime placement in our retailers’ sales floor, as well as our digital sight.

“We’re known for finding solutions in troubled times,” he continued. “When the bomber jacket died, we found that we could be a wool company. When the coat business became too seasonal because the Easter season was no longer an important season, we decided that we could become a dress company. And then, we decided we could become a woman’s suit company, and a footwear company. And the skill set that we have, both here and abroad, gives us the opportunity to say yes to almost anything we believe is appropriate for our company. And we can bring it to market in the truest form and become dominant in it.”

Other opportunities include taking advantage of current real estate vacancies caused by the pandemic to negotiate new store leases, as well as the possibility of future acquisitions.

“We might look for a brand with a stronger digital presence,” Goldfarb said. “That’s not off the table for us at all. We look for talented people. And today we look at geography. Historically, we would not have had a huge interest in a European company. Today, maybe.

“I’m not sure I need another department store brand to hang in the same areas that we do with our brands,” he added. “I think we would look to diversify distribution.”

One example is the Karl Lagerfeld Paris collection, which recently launched in select Macy’s stores.

But some critics think the company’s dependency on department stores could prove to be a continued headwind.

“G-lll has solid brands, but a business model highly reliant on wholesale (88 percent of sales). Hence, it depends on third-party brick-and-mortar to reach consumers,” Jay Sole, an analyst at UBS, wrote in a note. “The company has a high exposure to a challenged department stores channel ([roughly] 45 percent of sales). G-lll is also downsizing its retail division as this remains unprofitable. Thus, it will reduce its ability to reach consumers by itself.”

But Goldfarb said brick-and-mortar — including department stores — is still an important part of the retail equation.

“They work hand-in-hand,” he said. “Most department store groups have a digital presence that is being cultivated and is profitable. The presence of brick-and-mortar is enhancing the digital side.”

Macy’s, Goldfarb pointed out, has a $7 billion digital business. And the firm predicted its digital sales will reach $10 billion in three years.

“People referenced Macy’s sometimes as a dinosaur, because they’re brick-and-mortar and [people think] they don’t move forward,” Goldfarb said. “But they’re as futuristic as Amazon is.

“Technology gets valued on progress, not profits,” he continued. “Progress might be customer acquisition or new technology, and then brick-and-mortar gets valued on a low multiple of profits. But the companies that come through this pandemic with sufficient cash flow will find more solutions and better solutions than they ever did before.”

At G-III — which also includes Vilebrequin, Eliza J, Jessica Howard, Andrew Marc and Marc New York in the greater portfolio, in addition to fashion licenses under the Calvin Klein, Tommy Hilfiger, Karl Lagerfeld Paris, Kenneth Cole, Cole Haan, Guess, Vince Camuto, Levi’s and Dockers brands — total revenues fell to about $526 million during the three-month period ending Jan. 31, down from nearly $755 million the year before. That’s a 30 percent reduction. The company logged $14.6 million in profits during the quarter as a result, compared with $25.2 million a year earlier.

For the full year, revenues decreased 35 percent to just over $2 billion, compared with $3.16 billion a year earlier. Net income for the year was $23.5 million, down from nearly $144 million the prior year.

The company also incurred roughly $55.7 million in fees from permanently closing all of its Wilsons Leather and G.H. Bass stores (nearly 200) during the 2021 fiscal year.

Other headwinds include persistent declines in store traffic and the European business, which Goldfarb described on Thursday morning’s conference call with analysts as “the worst piece of our business.” 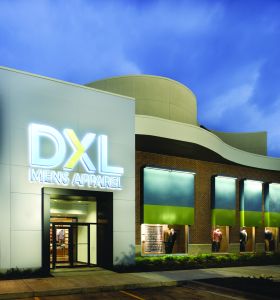 In discussing his firm’s results, CEO Kanter said “the single biggest challenge facing DXL continues to be our ability to drive meaningful traffic into our stores.” To address this “uphill battle,” he said the company is continuing to work with its landlords to “realign our occupancy costs with expected sales. We have approximately 131 stores with either a natural lease expiration or a kick-out option within the next two years. Our goal is to right-size our store portfolio, through lease negotiations or lease-term expirations, to optimize store profitability and omnichannel distribution,” he said. Peter Stratton Jr., chief financial officer, said the company secured $10 million in rent abatements and deferments for the months the stores were closed due to the pandemic and so far has negotiated 91 lease amendments that will account for $5.2 million in savings in fiscal 2021.

Despite the rough waters, Kanter remains optimistic — but acknowledged that the recovery is not going to be easy. Although comparable-store sales in November, December and January were down 41 percent, 36 percent and 34 percent, respectively, he told analysts, the slide has started to slow.

“In February our comparable-store sales were down 33 percent in fiscal 2019 and for the first two weeks of March our comparable-store sales have improved to minus 16 percent. Over the last six days, we’ve been nearly flat to 2019,” he said. “We are starting to see some of our loyal customers return for more than just underwear and activewear and work-from-home apparel — perhaps the only real thing they did need. For the first time in a long time when they have come in, we have seen a greater level of fashion selling from our older, more affluent customer and a heightened spending level. It appears to be coming back quickly, but time will tell.”