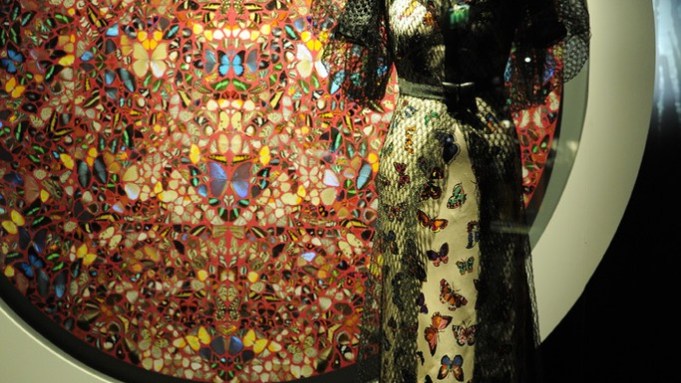 Dries Van Noten has laid bare his inspirations in an exhibition at Les Arts Décoratifs in Paris — and along with them, a broad sweep of fashion and art history.

The showcase, which opens Saturday for a six-month run, groups blue-chip artworks, fashion treasures from the Paris museum’s archive, and other objects — from films and sculptures to photographs — that have enriched the Belgian designer’s work over a career-spanning 30-plus years.

“We wanted to show how my brain is working, the way I get inspiration. I just wanted to share that,” Van Noten said during a walkthrough of the dimly lit show, in which gilded dresses, feathered hats and Victorian footwear glow like jewels in windowed cases.

Rather than a retrospective, the designer and Pamela Golbin, chief curator of fashion and textiles at Les Arts Décoratifs, chose to document how pop culture, fine objects, paintings and even the work of other fashion designers shaped Van Noten’s aesthetic.

The exhibition charts how inspirations can be direct — as in a fall 2009 collection that took direct cues from a Francis Bacon exhibition at the Tate Modern — or oblique, as in his spring 2014 women’s collection, which melded textiles from the museum with such disparate references as Jimi Hendrix, 18th-century men’s wear and Gerhard Richter.

Although inspirations are grouped thematically — military, gardens, Orientalism — the show is also vaguely autobiographical. It opens with a room wallpapered with words — names of designers, photographers, models, magazines and movies — that inspired him in his student years, when New York Times photographer Bill Cunningham would help him sneak into the fashion shows of Claude Montana and Thierry Mugler, fashion stars of Eighties Paris.

Then comes a barrage of images — Pat Cleveland clutching a milk bottle, drag queen Divine vamping it up — against which are posed a crème de la crème of fashions from that decade, including outfits loaned by Giorgio Armani and Versace alongside the museum’s selections of Kenzo, Vivienne Westwood and Jean Paul Gaultier.

“They mean something to me,” Van Noten said.

Mingling with them are three looks from Van Noten’s graduate collection from 1981, where he already demonstrated his penchant for exotica and surface decoration.

From there, the exhibition explodes in a pileup of visual stimuli, including a jaw-dropping array of paintings by the likes of Pablo Picasso, Damien Hirst and Christopher Wool, plus masterpieces by Il Bronzino and Johannes Bosschaert that are suspended amidst the clothes.

While most fashion exhibitions gather between 70 and 100 ensembles, the Van Noten showcase assembles more than 400 elements.

The juxtapositions are striking. Van Noten chose to include Christian Dior’s famous 1947 Bar suit in a section devoted to punk. “It’s quite rebellious to do a skirt with 30 meters of fabric in the postwar period,” he explained, also pointing to a small screen broadcasting scenes from “Vertigo.” “When it comes to the Fifties, and full skirts, my mind goes to Hitchcock.”

Van Noten and Golbin marveled that private collectors, including Italy’s Maramotti family, owners of the Max Mara Group, and major institutions from the Louvre to the Royal Museum of Fine Arts in Antwerp, readily loaned their works, rarely displayed with clothing.

In one vitrine, a 1925 portrait of a woman in a flapper ensemble by Dutch Fauvist painter Kees van Dongen abuts a large-scale photograph by Jackie Nickerson of a proud laborer in Zimbabwe, circa 1997. “Two women with the same look in their eyes: ‘Don’t mess with me,’” Van Noten said with a chuckle.

One of the original Antwerp Six and a graduate of the Academy of Fine Arts in Antwerp, Van Noten was among the pack of Belgian designers who made waves in the Nineties, and is arguably the one that has had the most enduring impact on both men’s wear and women’s wear, according to Golbin.

Alighting upon a room devoted to India, Van Noten said he began traveling there in 1987 and has collaborated with its embroiderers ever since. The influence may have read Bollywood at the outset but has become more abstract. Golbin explained that Van Noten has been challenging Indian ateliers to push techniques into new areas, shifting the focus from local patterns and motifs “more into savoir faire and craftsmanship.” A video wall of beads and sequins applied by hand is a tribute to their labors.

The “Inspirations” exhibit culminates with a video loop showing the finales of more than 60 Van Noten fashion shows: a fast-paced visual résumé of his career and a barometer of the times.

“At a certain point, you see the public holding up their phones [to take pictures],” Van Noten noted.

Barneys New York is a sponsor of the exhibition, along with mannequin firm Bonaveri.

“It’s very rare to find a designer with a sense of style so vibrant and creative who still remains true to himself season after season,” said Mark Lee, chief executive officer of Barneys, the first retailer to carry the Belgian brand in 1986.

For six weeks starting March 21, the retailer plans to devote its Madison Avenue windows to Van Noten, with the designer traveling to New York for a dinner at Lee’s home to celebrate the long-running partnership.