Christian Dior is using the importance of cruise and pre-spring to unveil an expansion of its product offerings aimed at broadening its customer base. 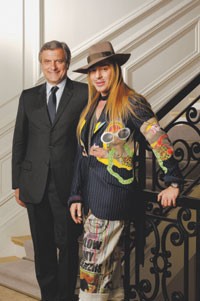 PARIS — When Christian Dior goes on a cruise, who’s invited?

Exemplifying the growing importance of cruise and pre-spring collections, the French house is using the season to unveil a major expansion of its product offerings, designed to broaden its customer base as it continues to build ever-larger stores and pushes into new markets like South America.

In an exclusive interview with WWD, Dior designer John Galliano and chief executive officer Sidney Toledano explained how they’re “upping the ante,” as Galliano put it, with an arsenal of products to reach more age groups, dressing occasions and fashion tastes.

“We’re at that stage now where we’re opening much more, which is a great challenge as a designer. We’d like to embrace a much larger audience,” an upbeat Galliano said, bearing no apparent ill effects from his recent fall through the glass shower door in his Paris apartment. While the accident prevented him from attending this month’s CFDA Awards in New York, the only remnants were a few bandages on his hands.

Ready-to-wear, often a mere image vehicle for some luxury houses to drive sales of their leather goods, remains a key expansion tack for Dior as the fashion house strives to reach an oft-stated target of $1 billion in sales by 2007. Sales of the pre-spring collection alone have doubled in the last five years.

Dior’s footwear category, which Toledano said has grown tenfold in only three years to “several hundred thousand” pairs a year, also is emblematic of the diversification drive. The cruise and pre-spring offerings span “vintage trainers to killer heels,” said Galliano, surveying a roomful of his designs. The designer even found a way to incorporate some of the exclusive prints he develops for rtw into dressy heels and sporty flats. He said it was a request that came directly from Dior’s store network, and he was happy to oblige.

“We’re a global company,” said Toledano, an understated foil in a quiet gray suit to Galliano’s paint-splattered, pinstriped getup. “We don’t want to be a shoe company or a bag company. We’re a couture house and people expect to see ready-to-wear at Dior.”

Come late October, stores will begin receiving a full blast of Galliano’s creative prowess. While couture remains his pinnacle expression for the house, the designer said he approaches his pre-collection no differently.

In fact, Galliano’s famous “inspiration” trips to far-flung locales are not the preserve of couture. Influences from his swing last March through Argentina and Peru turn up in the cruise collection in smocking details, striped gaucho pants and loose chiffon tunics inspired by local carpet designs.

“We covered a lot of ground. We would take a plane almost every day,” Galliano said, recalling a stop at one village where he encountered “children covered in pink dust” and a woman who proudly showed off her cactus collection. “How can you not be inspired by such things?” he asked. “It’s so rich, and it’s all here for the house to be energized and be inspired by.”

Galliano channeled those ideas into many new areas, vastly expanding Dior’s offering of tops, which represent an important access price point for a luxury brand. The designer said his litmus test for versatile separates was “having models come in and wear things with their own jeans.”

Toledano noted that prices of some items have been made “more competitive”; some jackets start at around 900 euros, or $1,089 at current exchange.

Galliano said he added more cocktail and evening components to each of his four fashion themes, citing a growing demand for occasion clothes, “which is very positive, don’t you think?”

While his assistants flung various styles in front of a visitor, the designer excitedly described cocktail numbers variously as “very Kate” (as in Kate Moss), “very Rosalind Russell in ‘Auntie Mame'” and another, twinkling with silver beading, as “so Sharon Stone in ‘Casino.'”

Galliano’s high-energy variety show extends to all accessories categories, too, including costume earrings tinkling with a tiny teapot and teacups (“a little touch of Sofia Coppola,” the designer noted); a new “Christal” watch model inspired partly by rocker Patti Smith — “Only me and David Bowie have one so far,” he quipped — and dramatic, “Alien”-esque sunglasses with concave lenses.

“In the old days, cruise used to be basic,” Toledano said. “What’s new today is that they have all the creativity and inspiration.”

Galliano stressed that Dior collections will always include “that finale dress” for fearless customers like socialite Dodie Rosenkrans, but there also must be something understandable for someone “who really wants the logo.”

“I’m a very generous designer,” Galliano said. “There’s as much detail in a T-shirt as you will see in a couture dress.”

Today, the Dior store network has 190 locations, and the company plans to end the year with at least 200, Toledano said. Stores are becoming larger — Dior recently opened an 8,000-square-foot store in Osaka, Japan, and 5,000-square-foot units in Las Vegas and Hawaii. Among the new locales being considered are Rio de Janeiro, Puerto Rico, Mexico City and additional sites in the U.S.

“Our potential is still huge,” he asserted, and, gesturing to Galliano and his trusted right hand, Steven Robinson, added, “and they have plenty of ideas.”

After an exhaustive tour of four rooms crammed with hundreds of products, from Peruvian baby dresses to embroidered handbags, Galliano couldn’t resist adding a punch line to Toledano’s sentence, laughing: “In case you hadn’t noticed.”