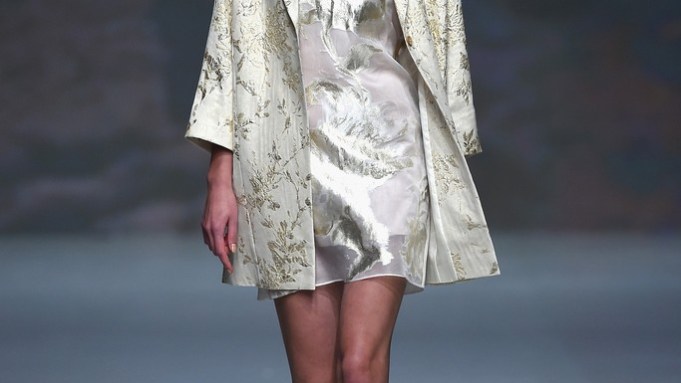 Designers based in the Middle East showed a new level of maturity at Fashion Forward, which, in its fourth season, has become a leading fashion showcase for the Middle East.

“In the Gulf, the big brands have always taken a large slice of the pie. The time is right for our designers to be championed and made more visible to the world,” asserted Fashion Forward chief executive officer Bong Guerrero.

He admitted that buyer turnout was low, but that was expected given the infancy of the industry: “They will wait and watch our designers. But I’m positive that is coming. Dubai in general is on the world’s radar, the best that comes out of here will be very attractive to the world.” Balmain’s artistic director Olivier Rousteing, who was in Dubai on a personal trip, sat front row at many of the shows.

Designer Tahir Sultan, of mixed Kuwaiti and Indian heritage, played up to the region’s love of embellishment. Opening his show with dramatically embellished pearl encrusted jackets layered over his trademark jumpsuits, the designer said he is focused on becoming commercially viable in his home market. Sultan previously has held presentations at London Fashion Week, but recently pulled back from Europe. “I’m an Arab designer, there is a lot of spending power here,” Sultan said. “I need to be big in my own pond first.”

Emperor 1688, recipient of this year’s Woolmark Prize for the Middle East and India, has become synonymous with luxury in the region. The label’s tailored clothes, designed by three Iranian brothers — Babak, Haman and Farhan Golkar — are designed in Dubai and made in Italy. What began as a men’s wear line evolved into a collection that includes tailored jackets and separates for women in neutral, desert-inspired tones.

Madiyah Al Sharqi, daughter of the ruler of Dubai’s neighboring emirate, Fujairah, showcased a collection fit for a princess. Al Sharqi cites Marie Antoinette as her muse, and turned out a luxurious collection of dresses and separates using custom made lace and jacquard silk with crystal and beaded embellishments.

As is common in royal households, Al Sharqi grew up with a personal atelier catering to the needs of the ladies in the family. She designed her first dress at age 8, and now at only 22 is a rising star from the Middle East. Al Sharqi also held a presentation during Paris Fashion Week that garnered the attention of Kim Kardashian and mother Kris Jenner, who was spotted wearing her work.

A London-based designer of Saudi heritage, Lamia Asudari told a lighthearted story with the use of bows that were tied and unraveled in different prints throughout her collection. “I wanted to revive that feel of early Nineties Moschino denim, ” said Asudari, who carried the print into jeans as well.

The most extravagant production came from Dubai’s Amato by Furne One. The Filipino couturier has been based in Dubai for over 20 years, creating pieces for the royal families of the Gulf. His finale included intricately detailed dresses and bodysuits paired with origami style overlays made of soft tulle.

Amato, which has concentrated on couture for both royals as well as many Hollywood celebrities like Heidi Klum, Jenifer Lopez and Katy Perry, hopes to next branch into ready-to-wear. “It will take a lot of investment, but I’m ready for that,” the designer said.