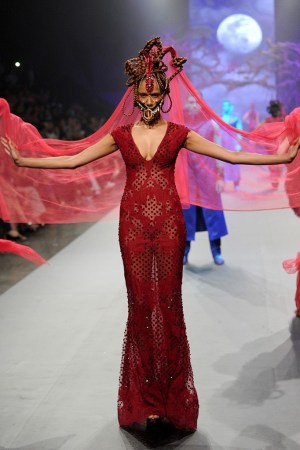 DUBAI — While most of Dubai’s malls are filled with international brands, some retailers here have taken a gamble on local designers — and realized a payoff.

Consider the Level Shoe District, the world’s largest shoe store, launched last year at Dubai Mall by the Chalhoub Group: It counts Jordanian footwear brand Aennis Eunis as one of its top sellers.

“The community of shoe lovers is here to discover,” the store’s general manager Rania Masri told a panel discussion at the third edition of Fashion Forward, a event that showcases the work of promising designers based in the Middle East. “We are happy to offer a platform to the emerging designers both regionally and internationally.”

Fern Mallis, the originator of New York Fashion Week and an industry consultant, shared her experience creating a platform for New York’s design community. “Dubai is in the right place at the right time. The Middle East is one of the fashion industry’s most vibrant markets,” she said. “A third of the world’s couture clients come from the Middle East. The world’s top fashion brands are not only courting you, they are here.”

Still, local designers will face the same challenges their peers in New York did two decades ago: identifying potential buyers and an audience to support them, Mallis said.

In Dubai, regional brands have taken a backseat to international names. Fashion Forward aims to help designers streamline their offerings to better appeal to local and international buyers. Styled after traditional fashion weeks, the event includes three days of couture and ready-to-wear shows, an exhibition space featuring regional accessories brands and a series of lectures.

Bong Guerrero, founder and chief executive officer of Fashion Forward, said the event is evolving to respond to the needs of the design community. “A lot of designers here start off very ‘mom-and-pop,’ working out of small studios and apartments with one or two tailors. They need financial support,” he said.

This season organizers partnered with Eureeca.com to launch crowdsourced campaigns for regional talents.

Accessory designer Roula Ghalayini of Poupee Couture was the first to successfully use the service. Since January, she has raised more than $100,000 via the site, exceeding her investment goal.

The designer, whose bags are handcrafted in Beirut, was featured in British Vogue as one of the hottest 100 bags last year. Despite the media attention, she lacked the funds to fully develop the proper marketing material to attract an array of buyers. “I was very focused on product development,” she said.

The Emperor 1688 — designed by three brothers of Iranian origin: Babak, Farhan and Haman Golkar — was another breakout brand at the event. The trio began with a line of tailored men’s wear and last year added women’s rtw. Now that their clothes are selling strongly at Saks Fifth Avenue and Galeries Lafayette in Dubai, they are poised to take their brand to a global market, partnering with Marvin Traub and Associates for representation in New York showrooms.

“There is a lot of caution for brands born from here, when you are not showing in Paris and Milan or part of that clique. But we are very proudly a brand born from Dubai, and soon it will have its own power,” said Babak Golkar.