More than 75 regional buyers turned out for Dubai's Fashion Forward. 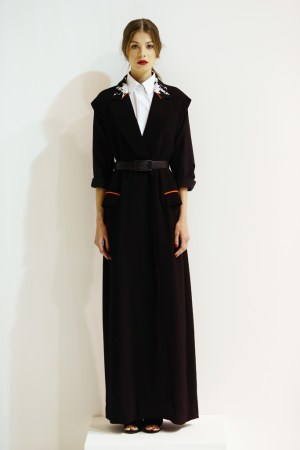 DUBAI — In a region known for its affinity for luxury brands, the appetite for regional designers has been slow to develop. But if the latest edition of Dubai’s Fashion Forward is any indication, that mind set is beginning to change.

More than 75 regional buyers turned out for the four-day event, which included 23 runway shows and presentations, panel discussions and showroom events.

“We started Fashion Forward two years ago to heighten awareness for the design talent we have in this market,” said Bong Guerrero, founder of Fashion Forward. “This platform is the starting point and as the industry becomes more mature, the content keeps getting better, buyers are more interested and consumers more aware.”

Shireen El Khatib is a retail executive known as one of the pioneers in retailing in the region, having introduced countless foreign brands into the market since the early Nineties, from Gucci to Giorgio Armani and department stores Bloomingdale’s and Harvey Nichols. Now she is launching an innovative new concept store called Macramé, focused solely on Middle Eastern brands. Slated to open at the end of the year, the store will be the first of its kind, offering a platform to both established and emerging designers across fashion, jewelry and home.

“Our consumers here are evolving. They are looking for an element of uniqueness and newness that the young talent offers,” she said. “The entire region is going through a renaissance in art and design. With our retail market maturing in Dubai, we are ready to move away from being just a mall-dominated, big-brand retail culture. It is time we introduce retail destinations through new and modern concepts.”

Design talent also has evolved, with an identity that blends the culture and tastes of the region: some modest and some bling.

A standout newcomer in the market is Bouguessa, launched last year as a brand of abayas — the black cloaks worn by women in the Gulf. Designer Faiza Bouguessa modernized the traditional Muslim dress by developing a line of separates centered on tailored long jackets. “I’m exploring the abstract concept of the line between modesty and individuality and between comfort and elegance,” said Bouguessa. “I took basic patterns from ladies’ wardrobes like a T-shirt dress, a trench coat, safari jacket and cardigan and adapted for the needs of women in this region.”

While using a neutral color palette of black, whites, creams and grays, she added graphic lines, bright pops of color and subtle zipper details to sleeves, not usually seen on abayas. The collection utilized light fabrics like viscose and cashmere which are more suited to Dubai’s mild winters.

Her designs resonated with Diane Pernet of A Shaded View of Fashion, who flew in from Paris to attend the shows. Known for dressing in long black robes and elaborate headpieces, Pernet said she felt quite at home in the Gulf. “Usually I really stand out by the way I dress, but here I’m really blending in with the crowds,” she said.

Lebanese designer Hussein Bazaza also showed for the first time at Fashion Forward. The fall collection, which he described as “both edgy and romantic,” used colorblocking in lace, geometric cuts, textured embossed leather, velvet and a lavish forest print inspired by a myth of a princess and a wolf. The young designer uses flowers as a signature element in every collection; this season they take the form of red roses.

Emirati Madiyah Al Sharqi created an airy pastel-hued collection in silk crepes, lace and leather. “Recently I have been spending a lot of time in Los Angeles, and I think of this collection as representing a winter in L.A.,” she said.

The finale show, Amato by Furne One, a Dubai-based designer of Filipino origin known for dressing Gulf royalty as well as celebrities including Beyoncé and Katy Perry in his elaborate gowns, took a different turn by introducing denim elements with heavy couture-style embellishment with safety pins and Swarovski crystals. One said the collection represented a bridge between the contemporary world and age-old Arab opulence. “This has been one of the most difficult collections to design; it is my ode to the emerging Eastern women and my celebrity patrons,” the designer said. “I had to pare down, yet reveal glamour — and this is all what modern luxury should be — a whisper of sensuality through our everyday reality.”