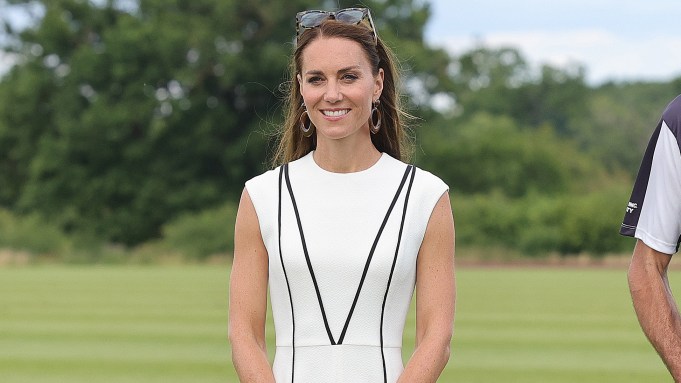 The Duchess of Cambridge knows the right occasion to bring out a swanky designer dress.

She joined him at the Guards Polo Club in Windsor for his annual charity polo match that he would previously partake in with his brother Prince Harry.

Middleton has been turning to Wickstead’s minimal structural designs when she’s on royal duties that expect her to show support rather than be heard. It’s a characteristic she’s come to quickly adapt to since joining the royal family in 2011.

Ivanka Trump wore the same dress in 2019 to the White House, when her father gave a talk on the Fentynol epidemic.

What the dress means on the two different women cannot be more paradoxical. For Trump, it’s powerful and sexy as accessorized with a wide white belt and towering stiletto heels.

Meanwhile for Middleton, it’s an easy summer dress that requires no fuss, while simultaneously supporting British labels big and small.

Wickstead’s clean designs have quickly become a reliable option for women from all walks of life, be it in politics or Hollywood. Fans of the label include Renée Zellweger, Amal Clooney, Lauren Dern and more.

At Queen Elizabeth II’s Platinum Jubilee celebrations, she chose a pastel yellow long sleeve midi number from the designer that stood out just enough without being the star of the show.

Middleton wore a pale blue textured dress to the Wimbledon tennis championships in 2019 and a near identical version in emerald green in 2021, both from Wickstead.

The Royal Charity Polo Cup is expected to raise 1 million pounds for the couple’s 10 chosen charities, including the London’s Air Ambulance Charity, the homeless organization The Passage and East Anglia’s Children’s Hospices.

If hot girl summer and Y2K fashion is for the TikTok generation, then rich royal summer is for the grown-ups with the funds to splash out on the likes of Emilia Wickstead.

PHOTOS: Click Through the Gallery to See Photos of Prince William and Kate Middleton’s Royal Wedding