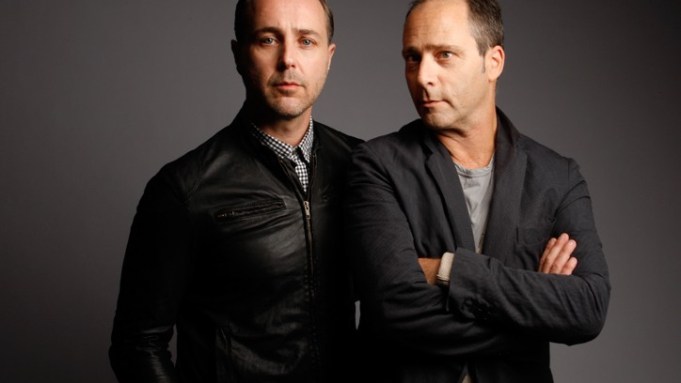 Duckie Brown came out of a shell this season, seeming both rejuvenated and matured on the runway. Designers Steven Cox and Daniel Silver have always traded in such gentle oppositions. Like yin and yang, the Duckie side, which is witty and experimental, balances the Brown side, which is proper and traditional.

Silver is from Canada and Cox from England, but the couple, now in their late 40s, both became naturalized American citizens and are longtime New Yorkers, all of which affects their dynamic, as well.

“We’re not from here, but we’re of here,” says Silver.

They were already together when, after years of designing for other American labels, Cox fulfilled a dream of starting his own line, and Silver, who was a daytime TV producer at the time, offered his business skills. Silver began to influence the design, as well. If Cox were designing by himself, the result would be very different, they agree.

In eight years, they have earned the respect and attention of the fashion industry, an ongoing collaboration with Florsheim shoes and, launching this fall, a contemporary collection in collaboration with Odin, the influential New York boutique. All this results from their knack for gentle provocation on the runway, which was in full effect for spring.

“It was about letting go of protecting and covering up, so it was about revealing the body. It was sexy with ease, not sexy like you had to be young or skinny to wear it. I think it had something for everyone,” said Silver.

They left behind the exaggerated proportions they’d played with over the years in favor of more crowd-pleasing elegance. Gauzy T-shirts and sheer camp shirts, printed with stripes and oversize plaids, lent a leisurely sensuality to the airy and refined collection. Light nubby fabrics made into relaxed blazers and safari jackets contradicted the gossamer tops, while frontal pleating and angled side seams pumped volume into chic shorts.

Cox, the one with formal design training, works by sketching a season’s entire show, from the first to the last looks.

“This season I wanted the sketches a little more loose and fluid, but still using my ruler. So they came out with these angled, asymmetrical sides,” which were kept as a design element, he says. “But there was also, and always will be, some rigidity, which stems from the structure of the strong shoulder that I always love.”

To balance the hardness, he brought in chiffon shirting, racy ruched swimsuits and shorts fastened with a large bow. Critics of the bow, mostly bloggers, were scandalized by it and used the strongest language the designers had ever elicited.

“People talk about the bow short or the high-waisted swim short as if we slaughtered 10 nuns and threw their bodies on a runway. It’s just a bow! A lovely bow. You tie your shoes with bows. Men wear bow ties. So what? I’m glad we got people’s blood to boil. But that’s not why we do it. We do what we love and think is important, and what we think the mood is,” says Silver. “Maybe on some level it was our most subversive collection, because it walked a very fine line of what is masculine, what is feminine, what men can or can’t get away with.”

It is repeatedly suggested that if Duckie Brown showed in Europe, it would be judged more generously than in New York, where salability comes first, second and third. But they’re committed to New York now. And Cox appreciates the commerciality that keeps his creative impulses in check.

“Besides, there’s an incredible stable of men’s wear designers in New York now and we’re proud to be part of them,” he says.

“At the beginning, we wanted to be in Europe,” admits Silver. “But we’re a New York company; we want to show here. We don’t want to run off to Europe. I love what happens in Europe, but we’re American. That would be like Chanel showing in Milan. To me that’s as much a heresy as the American designers showing there. I think it’s a betrayal.”

Silver runs their business conservatively—they only sell to about a dozen retailers around the world, including Barneys New York, Beams and Ships in Tokyo and Aizel in Moscow—refusing to expand at the risk of security. They are simply grateful to be self-employed and working together creatively.

Silver says, “We have an opinion about what men can or can’t wear, or how they should look, or what it is to be a man. The first way you define who you are in your masculinity is the clothes you put on your back. And that’s the bigger story of Duckie Brown that is of interest to us.”