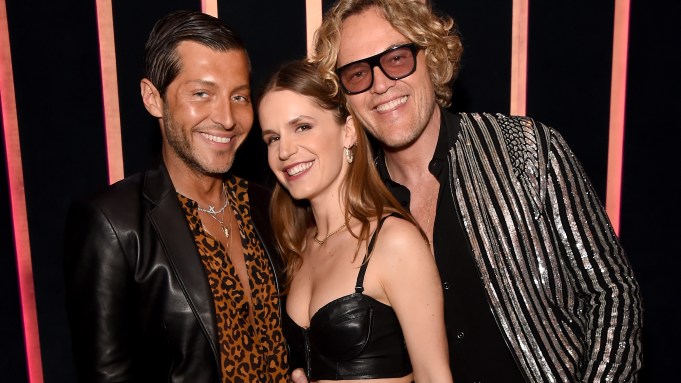 LONDON — Dundas, the seasonless women’s wear collection founded by Peter Dundas and Evangelo Bousis, has brought its traveling flagship concept to London, debuting the D6 collection at Selfridges, where Peter launched the brand in 2016. The pop up is running until the end of July, and the collection will roll out simultaneously to the brand’s 29 retail partners worldwide.

The D6 collection was inspired by the animals and nature of Africa, especially big cats such as black panthers and cheetahs.

“When I was launching the brand, I didn’t know what to put, so I put elements of a black panther into it. Now, every collection has a bit of black panther in it,” said Dundas as he sipped a glass of Champagne at Selfridges to mark the opening.

Dundas later rolled up the sleeves of his silver sequin jacket — one of the few men’s wear pieces ever produced by the brand — to display the black panther tattoo on his lower left arm.

The traveling flagship concept is an alternative to the current seasonal show system. “There are different ways of communicating with the media nowadays. It’s not checking in with fashion weeks for years and years anymore,” said Dundas.

“There are designers who express intellect, art and sometimes sadness through fashion, but I want the Dundas brand to be a happy brand. And I want my woman to feel that way with her life, too.” He added that nothing is more rewarding than knowing his client feels like a star in his clothes.

Bousis, his partner in life and business, added that, “Dundas is not just a red carpet brand. There are so many layers to Dundas. We do lots of leather, and we do daywear, too. In our mind, we are a lifestyle brand and a Dundas woman has many faces.”

So far, the brand has taken the traveling flagship to Los Angeles for Coachella, to Luisa World in Mykonos and most recently to SoHo during NYFW. The next stops for his pop-ups will be in Mykonos in the summer and New York this fall again. The brand will pop up in Asia – the place still to be determined – at the end of this year, or early 2020.

The designer said Asia is a going to be a key market for the brand, and they are in talks with potential partners to enter the market. “We are not in a rush, we want to get it right,” he said.

After the pop-up store launch, Dundas and Bousis celebrated with their London crowd, including Lady Mary Charteris, Betty Bachz, Rebecca Corbin-Murray and Oliver Jackson-Cohen at Onima, a new Greek, Italian and Japanese fusion restaurant in Mayfair, where Bousis is a friend of the owner.

As midnight approached, Josh Quinton and Jodie Harsh took charge of the dance floor with their DJ sets, with some of the Dundas guests showing off serious moves in their gorgeous nightgown dresses.