Peter Dundas will take a bow on Thursday as the new designer at Emanuel Ungaro, where he plans to evoke "mid-Eighties Paris." 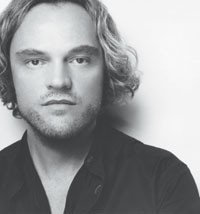 PARIS — Asked how he felt working behind the scenes all these years at celebrated houses such as Jean Paul Gaultier and Christian Lacroix, Peter Dundas demurred, “I’m shy.”

But this strapping, energetic Norwegian will take a bow on Thursday as the new designer at Emanuel Ungaro, where he plans to evoke “mid-Eighties Paris” in his debut collection.

“We need to make the house more present, taking the Ungaro legacy and making it relevant to today,” Dundas told WWD. “This show is going to be defining the Ungaro woman.”

Over the past three years, Dundas has helped define the Roberto Cavalli woman; Dundas he was head designer there right up until last Saturday afternoon, when Cavalli closed Milan Fashion Week. But Dundas has been quietly moonlighting at Ungaro since late last year — and feeling plenty inspired.

“The Ungaro woman really turns me on,” he said in an interview on Sunday, resembling a rock star in his tight jeans, boots and a beaten-up black shirt. Asked what defines her, Dundas rattled off a few descriptors: “energetic, alive, dangerous, very sensual, very feminine and very empowered.”

For his first collection, Dundas mined one of the house’s chief codes — draping, a technique he applies with wool jersey and nude colored chiffon and hints at with trompe l’oeil effects. He also makes reference to leg-of-mutton sleeves, another Ungaro signature

“I’m trying to give it a young twist, while preserving the spirit of the house,” he explained. There are mixes of prints, “but not too many,” and lots of plays on volume, with trapeze shapes and bulbous blousons, he added.

Dundas arrives at a celebrated house that has had a rocky time on the road to rejuvenation. He succeeds Vincent Darre, whose two collections for Ungaro received lackluster reviews.

Seated on a fuchsia armchair in the company’s historic Avenue Montaigne headquarters, Dundas sidestepped any commentary on the work of his predecessors, preferring to talk about the “DNA” of the house, with “the love of women” its central mantra. He stressed it would be a “step-by-step” process to construct a new and stronger image for the house, which he will do in tandem with San Francisco-based high-tech entrepreneur Asim Adbdullah, who last November purchased Ungaro from the Ferragamo Group.

The designer’s ambitions stretch to accessories, footwear and possibly couture, but he said his first runway statement, with a special emphasis on sensual tailoring, would be an important missive.

Born in Oslo 40 years ago to a American violinist mother and a Norwegian physician father, Dundas discovered a love of fashion early on, recalling that his American grandmother in Indiana was a habitué of Bill Blass trunk shows.

After completing high school in the U.S., Dundas enrolled in Parsons School of Design, where he devoured every fashion magazine he could get his hands on — and dreamed of moving to the industry’s creative hub, Paris. “My design sensibility corresponded more with a European sense of fashion,” he explained.

His wish came true in 1990, when he arrived in the French capital with a sewing machine and three boxes of belongings. He worked as an assistant costume designer for La Comedie Francaise, “Caligula” being his first production, before landing a job at Gaultier. He spent eight years there, relishing that designer’s “vigor” and “play with classics,” before heading to Lacroix for two years, working beside someone Dundas describes as a “poetic person” who generously shares his fashion gifts. At Cavalli, Dundas said he was given “freedom to play and have fun” with fashion.

“I love things that are done with your hands, and I think there’s a craft in fashion that is quite noble,” Dundas said.

The designer has yet to meet Ungaro himself. “There hasn’t been time,” he said. But an invitation to Thursday’s show has gone out to the retired couturier. “I have a tremendous amount of respect for him,” Dundas said.