Holly Dunlap — and Kellwood's new owner — hope to take Hollywould up a notch. 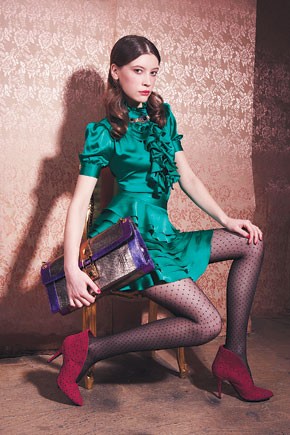 Holly Dunlap — and Kellwood’s new owner — hope to take Hollywould up a notch.

The brand launched in 2000 as a contemporary footwear label sold exclusively at Bergdorf Goodman. Today, the Kellwood Co.-owned fashion firm, which consists of contemporary apparel, handbags and shoes, is poised for growth. Industry sources said that while Hollywould isn’t a huge money maker for Kellwood’s parent, Sun Capital Securities Group LLC, it could grow rapidly once it develops into a full lifestyle brand. Hollywould could reach up to $50 million in sales within the next few years, according to sources.

“They [Kellwood] have added a support system to our infrastructure which we did not have before,” Dunlap said of the changes she has experienced since her firm was acquired in December 2006. “Despite being part of a large group, they have allowed us to maintain our independent brand spirit.”

Meanwhile, Sun has been busy making changes since it acquired Kellwood for $762 million in February, including shutting underperforming brands such as O Oscar, Liz Claiborne brand suits and dresses and its moderate dress business. Additionally, although Sun has traditionally kept on the management of the companies it acquires, it has hired Russell Reynolds Associates Inc. to find a replacement for Kellwood chief executive officer and president Robert C. Skinner Jr., and has let go several top executives.

Dunlap said she is confident Hollywould will continue to thrive under Sun’s ownership of Kellwood, and Skinner, to whom Sun referred calls, agreed.

“We are expanding the Hollywould business on multiple fronts simultaneously because of our belief in Holly and the brand,” said Skinner Wednesday. “We are investing in her accessories and clothing collections as well as in new retail stores. When we acquired Hollywould, we sensed there was an opportunity to develop the brand into a global lifestyle property, and we continue to believe in the brand’s expansion.”

“The dresses are doing really well at Bloomingdale’s, but we have been taking the separates part really slow,” Dunlap said, noting that shoes still make up 70 percent of the overall business. “We are really expanding for cruise, which has become our most important season, and we’re planning for the apparel to become a significant part of the business.”

When Dunlap launched the dresses last year, she said the prices were too high for the contemporary market, making it difficult for her to compete for floor space. She said she was doing most of her production in Italy, since she already had relationships with many of the shoe factories there. After testing the dress line, which wholesaled between $125 and $395, Dunlap had to do something to lower her prices. So she moved the apparel production to factories in Asia. The fall line, which introduces some of the sportswear into the mix of dresses, wholesales between $120 for a silk skirt to $283 for a coat. For cruise, which will open to retailers on June 2, the line will expand significantly, offering the largest collection of Hollywould apparel and handbags to date. Currently the brand is sold in over 60 specialty stores worldwide and the handbag line will be in Nordstrom for fall.

“The clothes will carry the same look and quality as they have, but now we will be able to compete with the other contemporary brands out there,” Dunlap said.

To accommodate all the new product, Dunlap said she will double the size of her showroom located at 12 West 57th Street in New York. The construction should be completed in August and the new showroom will house the apparel in one area, and bags and shoes in another. The design and business offices for Hollywould have moved into Kellwood’s offices at 360 Park Avenue, to allow for the showroom expansion.

In addition to the growth in product categories, Dunlap plans to open several more freestanding stores within the next year. Her current New York store, located at 198 Elizabeth Street, is 800 square feet and too small to carry all of the new product categories. So, in early 2009, Hollywould will move to 16 Prince Street, at the corner of Elizabeth Street. That location will be 1,200 square feet and will have a more modern design.

“When we first opened our store we were literally in there painting the walls and bringing in our own furniture,” Dunlap said. “Now we will be able to work with an architect to build out the space and help us to roll out the look of our other stores.”

In October, the brand’s Palm Beach, Fla., store will move from the upper level at 36 Via Mizner to a larger location that is still being worked out. Dunlap said she hopes to find a space that is at least double the size of the current store, which is only 400 square feet.

Also in October, Hollywould will open its first Miami store, in the Aventura Mall. That location will be 1,120 square feet and will sit next to an M Missoni store. Next up, Dunlap said she is looking for locations in Los Angeles, Atlanta, Dallas and San Diego.

“My advice to any new designer is to open a store,” she said. “Opening our own stores was one of our smartest moves. It showcases the brand the way we see it and we can get our point across.”