The Dutch designer, known for his cut-and-paste design, debuted his first digital catwalk show and is getting ready to launch his first jewelry collaboration — where Cartier and Tiffany & Co. will meet for the first time.

Lantink started dismantling old-season designer inventory and giving it a new lease on life long before the fashion world had a proper understanding of deadstock materials and the effort it takes to upcycle them.

Since then he has gone on to be nominated for the LVMH Prize and been given the key to the Browns’ warehouse to upcycle unsold inventory for special capsules. He has helped brands such as Ellery upcycle old stock during lockdown, instead of producing new collections, and has created custom pieces for the likes of Billie Eilish and Janelle Monáe — including the latter’s vagina pants that went viral on social media.

His signature cut-and-paste approach, commitment to sustainability and subversive sense of humor — he loves combining deadstock materials from rival brands — is radical in an industry obsessed with newness.

Now that upcycling has infiltrated the mainstream, demand for Lantink’s skills has been higher than ever.

He has a new collaboration with fine jewelry marketplace Auverture that saw him repurpose pre-loved Cartier and Tiffany pieces into a new, hybrid design and debuted his first fully fledged collection and digital runway show today.

The shift to creating his own collection has offered Lantink more freedom to experiment with silhouette and his own brand identity.

Using all the leftovers in his studio, from designer pieces to old military garments, he’s dismantled everything to create something new: The fabric of a bright pink Balenciaga skirt became the hood of a vintage leather jacket featuring old Moschino dollar sign embellishments. A Louis Vuitton monogrammed leather panel has been patched onto the body of a mannish wool coat. 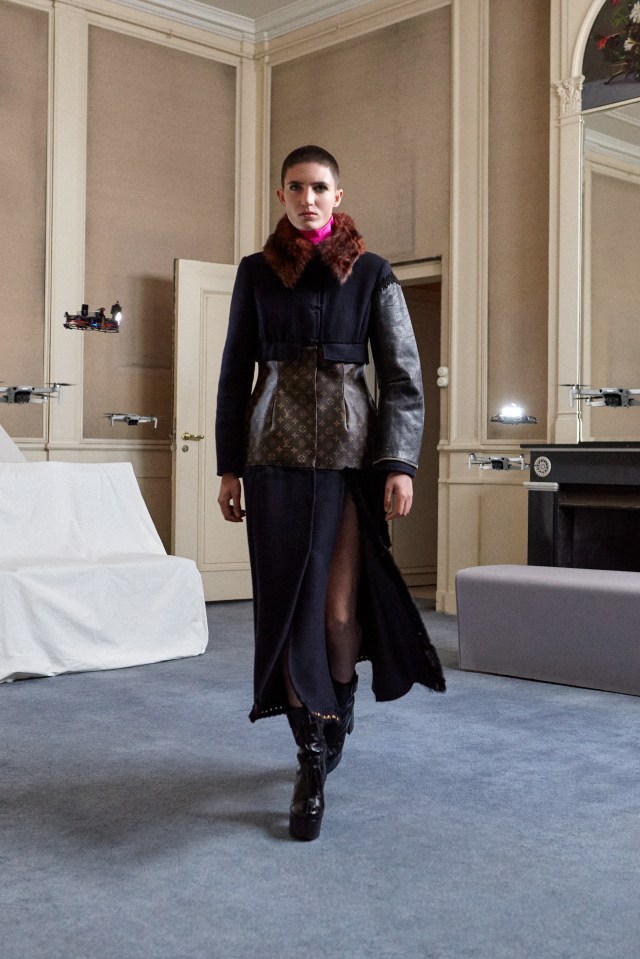 He has also introduced bold cuts and experimented with how garments flow on the body and expose certain areas.

“I was always taught that sex sells, but it just sounded really weird. I never used to think about showing body parts with my clothes. So this was about exploring what ‘sex sells’ really means and why is it that sex sells?” said Lantink, adding that he wanted to push boundaries, but also leave some room for comic relief.

He re-created a version of the famous logo thong that Tom Ford created for Gucci in 1997. Lantink’s version is made using Swarovski-embellished material from an old-season Balmain dress and features the Duran Lantink logo.

The thong peeks out from the extra-high slits or open backs of dresses worn by men and women alike.

“I could never only make a women’s collection. It’s always been fluid for me, that’s why there are also trans people in my show. It all needs to be crossing over, because I really believe that this is the image of today. For me it’s important to show both and also try to confuse people, so they don’t know if it’s a boy or a girl anymore,” added the designer. 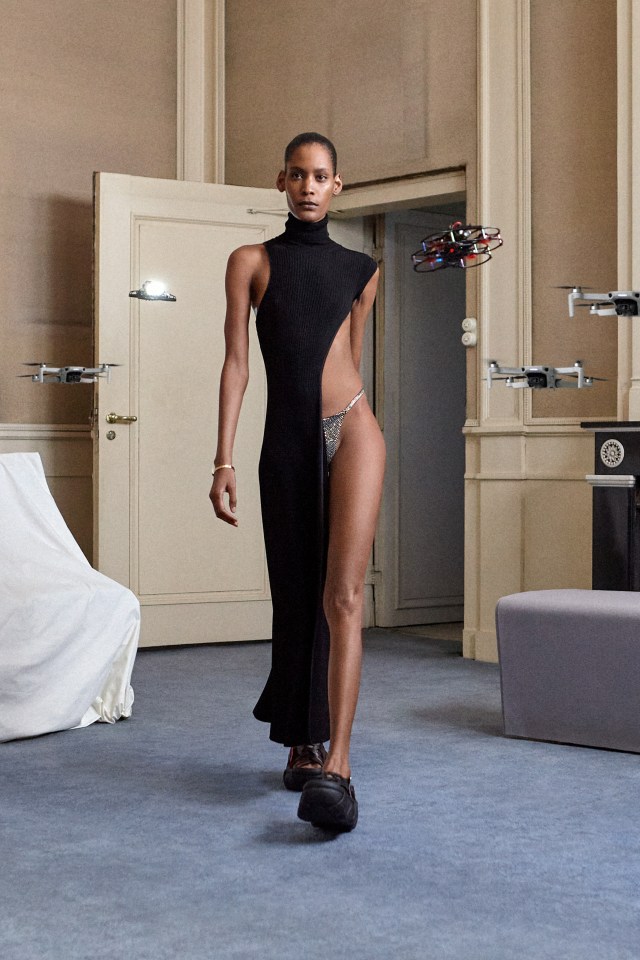 His cast of colorful, fluid characters is seen waltzing through the Palace Soestdijk in his home of the Netherlands, with a fleet of drones showing them the way through. Apocalyptic music can be heard in the background.

“Given the COVID-19 situation, having drones replace the influencers, editors and celebrities who would usually be there was the best way to play with some of the elements of the live show and [to discuss] the relevance of having people there,” said Lantink.

“We really wanted to keep the illusion alive that there is no one present in the palace and everything has been done by drones and the models. We even have videos of drones putting makeup on the models.”

A teaser of the show also showcases a flying drone with the voice of broadcaster and environmentalist David Attenborough inviting people to tune in.

“It’s so scary that you could just easily replace your own voice with a celebrity voice. You can face-swap a model with a celebrity model,” said the designer, who wanted to use his digital presentation to reflect on how technology is infiltrating people’s lives and to create a link between fashion and the hard-hitting environmental issues Attenborough explores in his documentaries. 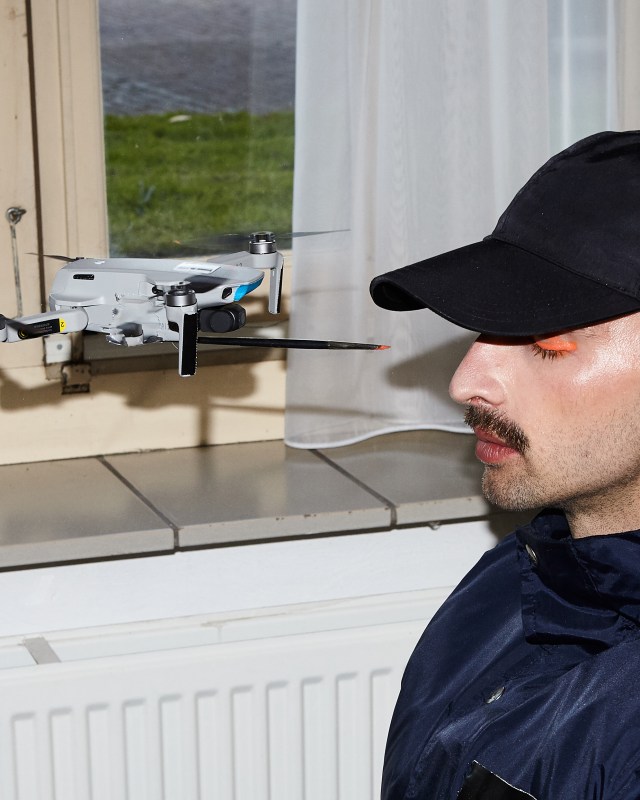 To that end, Lantink is staying away from traditional production methods for a while and taking his upcycling services one step further. On his newly launched e-commerce platform, customers will have the ability to resell their Duran Lantink pieces through the brand, or bring them back to be dismantled and redesigned.

“Let’s say you own this coat, but after a year you really don’t want that coat anymore: We can transform it into a dress for you. That’s how we want to try to keep the collection alive over the years and document the process along the way. You just pass it on and you let it transform. This approach of loving your pieces and not seeing them as just seasonal is what I really want to push,” he said. “More and more people are adopting this attitude, so I’ve been altering clothes for private clients. Luxury items shouldn’t be disposable.”

Looking at how the landscape has been shifting since the COVID-19 outbreak, with more brands keen to upcycle and make sustainable changes, Lantink remains skeptical about how dedicated bigger brands are to using deadstock and fewer new materials or whether this is just a “snap of a moment” for them.

“That remains unknown, but what I do know is that it’s a pity that brands are just recycling themselves and don’t go a step further to create something completely new,” said Lantink, who has a flair for mixing-and-matching brands to create a new language. 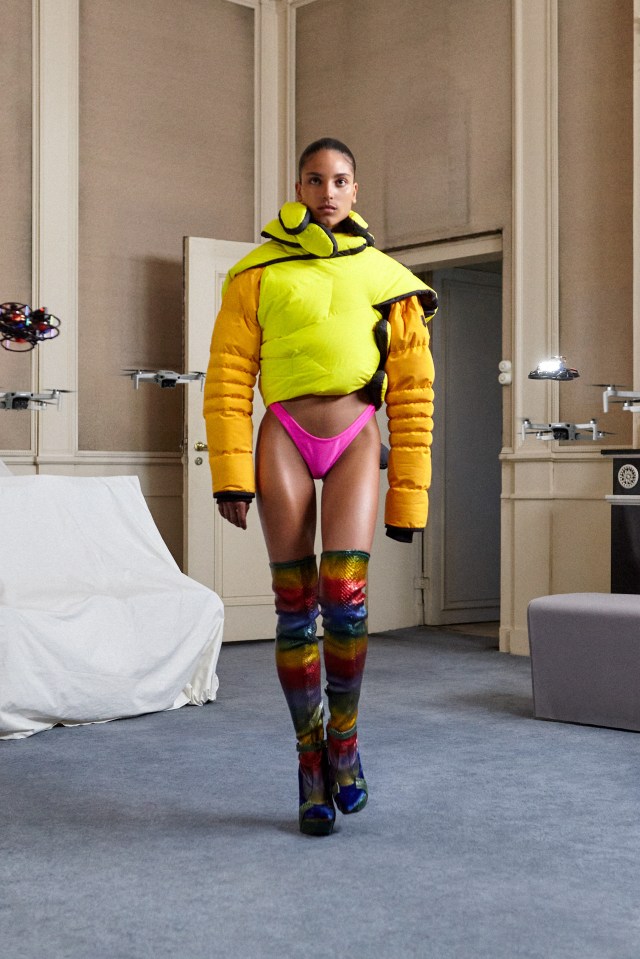 A Duran Lantink piece could be made of Dries Van Noten sleeves mixed in with a Balenciaga body — and if the brands happen to be rivals, even better.

“At the beginning it was all about combining mixing all the big rivals together, putting Kering and LVMH together. It’s not the main core of what my practice is about, but I still love to do it. I love to play with those elements because it would be really hard for Kering and LVMH brands to collaborate themselves.

It’s why he was ready to team with Auverture to create a series of hybrid designs fusing the Cartier Love and Tiffany T-bracelets, which will launch on June 1.

The idea was to reinvent two icons and educate modern jewelry consumers about how they can re-create pieces they own and might have gotten tired of, in order to extend their life spans.

“It was a good opportunity to show people a new take on slightly overproduced jewelry. It’s really trying to add value back to those overexposed but iconic pieces,” added the designer. 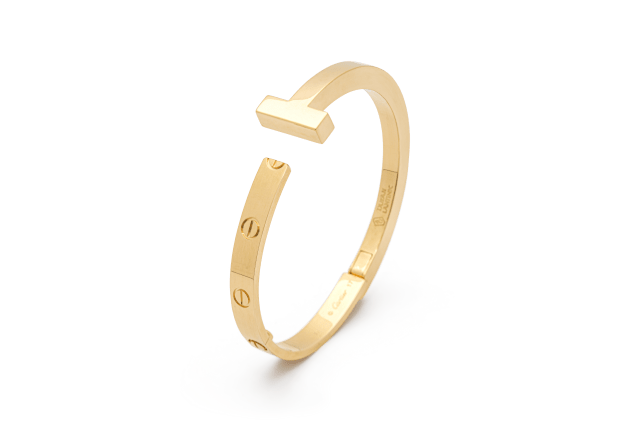