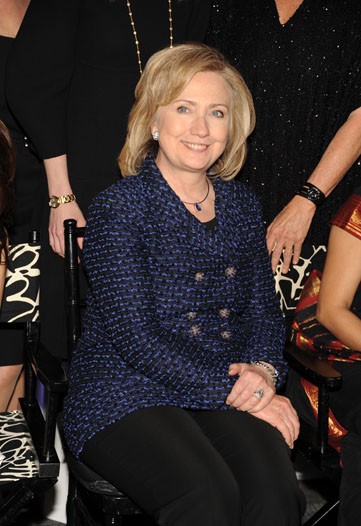 NEW YORK — At the DVF Awards on Friday, Diane von Furstenberg inspired many of the women to think about their inspirations to gather the strength and make a difference in other women’s lives. In the designer’s own case, it was her mother, Liliane Nahmias, who survived 14 months at Auschwitz. “My birth was already a miracle and I had already won when I was born,” von Furstenberg, who co-hosted the event with Tina Brown at the United Nations, said. “The women we honor tonight all remind me of my mother. They have used their strength and courage to turn defeat into victory.”

With her words, von Furstenberg set the tone for the entire evening, which honored Secretary of State Hillary Clinton and a group of other remarkable women whose accomplishments, often in the face of adversity, are making profound changes to the lives of other women around the world (a notion that was only enhanced with a soundtrack of female empowerment anthems like “I’m Every Woman” and “R-E-S-P-E-C-T”).

Chelsea Clinton was on hand to present her mother Hillary with the inaugural Inspiration Award. “She is the princess of our royal family, the Clintons,” von Furstenberg said. “Yesterday we were talking about he first woman president. Well, I don’t know if it’s Hillary, but it may very well be Chelsea.”

For her part, Chelsea Clinton already looked quite presidential on stage, recalling the countless ways her mother gives her reason for pride. “My mother once said, ‘I wasn’t born a First Lady or a Senator. I wasn’t born a Democrat. I wasn’t born a wife or mother,’” she said. “But I think she may have been born an advocate for human rights, women’s rights and children’s rights.“

The Secretary of State stressed the importance of having the diverse stories of the women, who were in town for the Newsweek & Daily Beast Women in the World Summit, heard.

“These are really important stories,” Hillary Clinton said. “They are not ones that are usually told. They don’t grab headlines except in unusual circumstances, but this is some of the most important work anywhere in the world — empowering women to stand up for themselves and their families and claim their voices and their votes.”

Laura Linney introduced Elizabeth Smart, this year’s recipient of the Courage Award who recalled her abduction. “I remember dark things I felt, when I couldn’t control what was happening to my life,” Smart told the audience, which included Iman, Police Commissioner Ray Kelly, Tory Burch and Tamara Mellon. “I remember how quickly I had to decide if I would survive or if I just had to give up,” Smart said. “I never want another child to have to experience what I experienced.”

Other honorees included Taryn Davis of The American Widow Project, who received the People’s Voice Award; Kakenya Ntaiya of the Kakenya Center for Excellence and Sohini Chakraborty of Kolkata Sanved.

Anh Duong designed the statues for the awards, which were created with the support of the Diller-von Furstenberg Family Foundation to heighten exposure and give resources to individuals who work on women’s.

Model Karen Elson ended the evening with a rendition of “Where have all the flowers gone?” Von Furstenberg didn’t forget about the men that night. “Be proud to be a woman,” she said, “And if you’re not a woman, be proud anyway.”