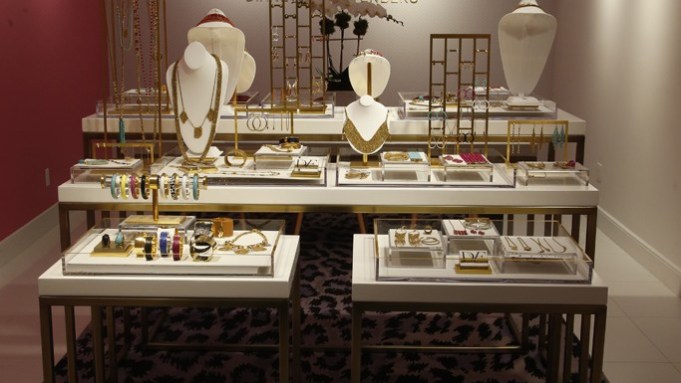 The question, when posed by Diane von Furstenberg, herself dripping in various baubles, is rhetorical.

Von Furstenberg is returning to the fashion jewelry business after a hiatus of 30-plus years. The collection, an expansive offering of necklaces, earrings, rings and bracelets, is done in collaboration with Haskell Jewels. “We were in business together 30 years ago, and now we’re back,” von Furstenberg said, referring to Haskell chairman and chief executive officer Frank Fialkoff’s stint overseeing von Furstenberg’s jewelry license for all major department stores back in the early Eighties.

Asked how the duo first met, Fialkoff began to describe the pair’s professional history before being interrupted by von Furstenberg. “Oh, we dated,” she said, moving on to the current topic at hand: the jewelry. “I still am doing fine jewelry, but people ask me for costume jewelry. They want to have the $300 necklace.”

Prices for the collection range from $68 to $628, far below those of von Furstenberg’s high-end collection, Diane von Furstenberg by H.Stern, which has pieces priced up to $100,000. Despite the difference in ticket price, the look is still very much DVF. “I really love jewelry that makes noise and makes a statement,” said von Furstenberg. “I also like fluidity in jewelry. It’s all treated like fabric.” Standouts of the collection are the Knitted Chain styles, inspired by the movement of DVF’s jersey dresses. Each piece is hand made from diamond-cut brass chain and plated in gold, then manipulated to create different chain styles. Other styles take on a more structured look, such as cuffs and bangles done in embossed leather. Colorful accents punctuate the line — pops of coral, turquoise and von Furstenberg’s signature hot pink. The collection will launch in DVF boutiques, as well as additional retail locations, beginning in February.

The endeavor has been “a long engagement,” according to Fialkoff, with a year alone spent on the design process. “The key to this line is that Diane touched every piece of it,” he added. “‘I like it, I don’t like it, I want it, make it blue, make it green.’ And that’s what makes it work.”

Von Furstenberg aimed to provide customers with a lower-priced option that stands up next to its fine-jewelry counterparts. “This is $28,000, while this is $200,” she said, comparing her own bracelet to a similar new style. “Gold has become so expensive. People see me with a lot of jewelry, and I need to be able to make jewelry that people can afford that doesn’t compromise on the quality and design.” Fialkoff anticipates that von Furstenberg will bring new customers to Haskell Jewels. The company’s existing licenses are Betsey Johnson, Kenneth Cole and Steve Madden. “From a real designer point of view, Diane, I feel, is one of the leading designers of today,” he said. “We’re hoping to get all of the stores that she’s currently doing business with.”

Von Furstenberg and Fialkoff declined to provide sales projections. But speaking to the confidence Haskell Jewels has in its new license, the company has opened a DVF-focused showroom within in its Midtown showroom, with a time line of von Furstenberg’s career emblazoned on the hot pink walls.