NEW YORK — Diane von Furstenberg’s first collection of swimwear and beach offerings is a lot like the designer herself: colorful, fun and with a strong point of view.

Von Furstenberg has teamed up with Como, Italy-based textile... 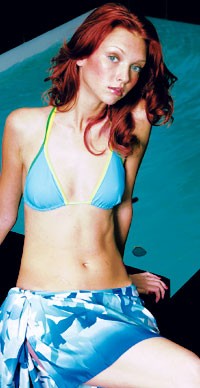 NEW YORK — Diane von Furstenberg’s first collection of swimwear and beach offerings is a lot like the designer herself: colorful, fun and with a strong point of view.

Von Furstenberg has teamed up with Como, Italy-based textile giant Mantero Seta SpA for a licensed collection of swimwear, beachwear and scarves for spring, some of which were previewed at the designer’s runway show here earlier this month.

“Swimwear is a very natural thing for me to do,” von Furstenberg told WWD on Monday. “The idea for this was to make something that’s fun and flattering, and also signature for me. Swimwear today is different than it was, in that it’s not only for summer. People travel more and they swim all year long, and it’s something you can pick up, and it’s an immediate ray of sunshine.”

The initial swim offerings include bikinis, maillots and one-piece tank styles in bold colors and prints, some of which have matching scarves featuring iconic DVF images, such as lips and link graphics. Both Brazilian and American cuts are available for the bikini bottoms. Other beach looks consist of items such as terry printed towels, tote bags, cover-ups — including DVF’s signature wrap style in a terry cloth hooded cover-up — ponchos, pareos, terry cloth dresses and even some oversized cotton hats.

The initial scarf looks include silk styles with flowers and postcard prints, and cotton styles with the DVF image created by Andy Warhol and other graphic looks. There is also a selection of twill and crepe styles, as well as chiffon shawls and head scarves.

Swim is a bustling category these days, and fashion firms of all sorts are diving into the market. Among recent swimwear newcomers are Juicy Couture, St. John Knits, Calvin Klein’s Choice brand and Paul Frank. Meanwhile, Michael Kors will launch a collection produced by Warnaco for 2006.

The DVF swim line carries wholesale prices of about $44 to $56, while scarves range from about $11 for some of the cotton styles to $111 for a crepe look. Mantero chief Mortiz Mantero said earlier this year that the collections are expected to ring up sales of about $10 million in the next five years.

Mantero also makes an innerwear and beach collection under license for Gianfranco Ferré, and produces textiles for a roster of big-name fashion firms such as Versace, Escada, Polo Ralph Lauren, Gucci and Prada.

In the U.S., the offerings are being sold out of the Mantero of America showroom on 39th Street and will be shown at the Coterie trade fair here this week. While a limited selection of offerings will hit stores for resort, the entire collection will roll out worldwide in February. Among the U.S. stores slated to carry the collections are Saks Fifth Avenue, Neiman Marcus, Henri Bendel, Bergdorf Goodman and Bloomingdale’s, said Abigail Klem, director of licensing for DVF.

For von Furstenberg, the new categories are the latest in a slew of new projects this year. The designer started a jewelry line with H. Stern, and she just opened her first store in Paris. The company bearing her name now has five licensing deals, including luggage, beauty, rugs, jewelry and the beach and scarf line.