Diane von Furstenberg kicked off her boots, moved to the plush sofa in her suite's living room and said, "Let's get comfortable" - three words that seem to be serving as the designer's mantra of late. 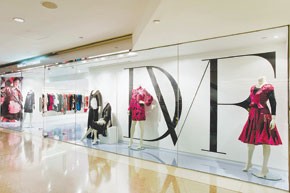 HONG KONG — Diane von Furstenberg kicked off her boots, moved to the plush sofa in her suite’s living room and said, “Let’s get comfortable” — three words that seem to be serving as the designer’s mantra of late.

Von Furstenberg has been in Asia for two weeks — as tourist, award recipient, businesswoman and president of the Council of Fashion Designers of America — and there is still plenty to see and do. “I am totally impressed and excited — totally impressed,” said the designer, who has become an ardent admirer of the region, especially Beijing. “I haven’t ever been this impressed about anything — to witness what they are building in Beijing — from the Opera House to Rem Koolhaas’ TV tower and the Aquatic Center and the Bird’s Nest — it’s like nothing I have ever seen before. I know that people say they are building for the Olympics, but really they are building for eternity. It’s like being in ancient Egypt during the time of the pharaohs — this is something that happens every two millennia.”

In Asia, the enthusiasm is mutual. Three years ago, there were no von Furstenberg shops in the region. Today, there are six, including three in Hong Kong, one in Singapore, one in Jakarta and the newest addition in Shanghai. David Ting, president and chief executive officer of Globalluxe Ltd., which operates the brand in Asia, said more stores are in the works.

“We will be in Macau at the Four Seasons in late spring, opening Beijing in mid-2008, we’re confirming a location in Taiwan and we’re opening a second shop in Jakarta,” said Ting, who added the company is also looking into China’s secondary markets. “It will be gradual — we want to wait for demand before going in. But we’re lucky because Diane’s collection is never ‘heavy,’ even in fall-winter. It’s perfect for the more tropical climates.”

Von Furstenberg agrees with the strategy. “We will grow at a pace that’s most healthy for the brand. We’re not going to exploit the market. I don’t want to be a brand colonizer. I want to appeal to the emotion of women,” she said.

While DVF stores have been cropping up regularly in the region, there are still certain markets that Globalluxe is treating with caution, notably Kuala Lumpur. “We’re looking at maybe 2008,” said Ting. “Kuala Lumpur is great for accessories and for Middle Eastern shoppers, but not so much for ready-to-wear.”

The accessories angle is certainly one von Furstenberg is ready to explore. “Accessories will be our major expansion and my major effort in the next two years,” she said. “Shoes will launch in my shops in spring and for handbags I now have some very talented designers. This is very much a global effort.”

While von Furstenberg continues to expand her product range and global presence, as president of the CFDA, she has concerns that other American designers are not thinking the same way. “I am constantly telling the designers that the world is global. But there aren’t that many who have global businesses — Ralph [Lauren], Marc [Jacobs] and Oscar [de la Renta] to an extent. They really should come see what’s happening.”

She is even contemplating organizing a tour with other American designers so they can see Asia’s potential for themselves. “I have been in Asia for a few days now — to Tokyo, Beijing, Shanghai and here in Hong Kong — and I realize that this really is the new center of the world. It’s not just what’s happening, but the speed and magnitude of what’s happening,” she said.

Having hiked many of Hong Kong’s most challenging mountain trails and slipped into the city’s whirlwind social scene, von Furstenberg is ready to depart Hong Kong, if not Asia. The designer next heads to South Korea to “see a museum and a factory” and then returns to Shanghai, where she will be presented with the International Fashion Legend Award at the China Fashion Awards. “I’ll have an eight-and-a-half minute fashion show on national Chinese television. One hundred million people will be able to see the show and copy the clothes,” she joked. “But really, I am so excited. I don’t want to leave.”