Diane von Furstenberg's dresses have been characterized as sultry, which also could describe the designer. 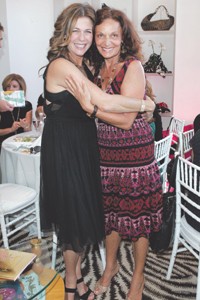 LOS ANGELES — Diane von Furstenberg’s dresses have been characterized as sultry, which also could describe the designer.

And that image was never more appropriate than at the opening Thursday of her Melrose Avenue store here, when the mercury climbed to more than 90 degrees.

Marsha Thomason blotted her forehead with a napkin while Teri Polo lapped up champagne. “My dress is sticking to my bum,” Polo said. “I wonder if they would mind if I just took another dress off the rack and put it on.”

While there were plenty of dresses for guests such as Jessica Capshaw, Jacqui Getty and Regina King to peruse, the burnished steel racks were far from complete, von Furstenberg noted. Crews were scrambling to complete the 1,600-square-foot, bright white and mirror-speckled shop right up to the event, which was the first of two on Thursday to celebrate the opening of her third shop in the U.S.

“The awnings weren’t even ready yet to shade the store, so I had to improvise with these rented trellises to keep the sun out,” said von Furstenberg, who kept granddaughter Antonia Steinberg close at hand.

Many guests improvised, too, using their invites as fans during the lunch. “Diane’s clothes are a little like togas — they wrap, they drape, they’re perfect in such heat,” said Rita Wilson, although her toga-like frock was by Chloé.

Collecting quite a bit of heat at the affair were the colored-diamond, chunky link bracelets and bulbous cocktail rings on show that von Furstenberg designed with H.Stern, among the special features at this door.

So, too, will be the red-carpet-ready evening gowns, shoes and accessories many locals require year-round. The salon containing these luxury parts of the brand is distinguished by a grand metal and glass Art Deco chandelier von Furstenberg brought from her New York studio.

“The concept of all the stores is similar with the mirrors and Lucite,” she said. “But this one is so L.A. looking. Paris light, London light, L.A. light — they make the stores all so different.” She will get a chance to consider the light in Hong Kong later this month when she visits a recently opened 1,000-square-foot signature store there. This week, a second Paris shop opens on the Left Bank.

For next year, von Furstenberg is considering new doors in Tokyo, Dubai and Shanghai, and possibly Munich — some owned by von Furstenberg, or with a partner or as a franchise. The New York store will reopen in a new 14th Street location.

Los Angeles is a second home for von Furstenberg, who shares a Coldwater Canyon estate with husband Barry Diller. She recalled her first visit here in the Seventies: “For a European girl, you know, L.A. is movies and movie stars. When I came at that time, it was to meet movie stars, sleep with movie stars. I was just here a few days. But they were busy days.”