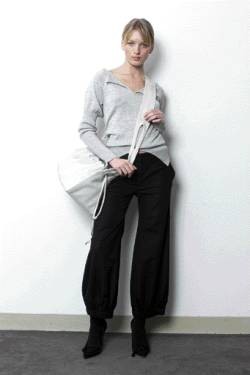 Ever since New York’s fashion community picked itself up and moved to the front of the international fashion calendar, designers here have been placing less emphasis on their pre-season collections, since their runway shows now take place just a few weeks later. Meanwhile, many European houses have conversely increased their focus on early offerings as a means to remain competitive with early deliveries.

But following a rough fall retail season, they’re competing like crazy this week with early sneak peeks at their concepts for next fall. Some Americans are getting back in the game as well, with big preview collections that are destined to hit stores as soon as May.

Chloé brought its pre-fall selection to New York this week, Donatella Versace showed women’s fall looks on the men’s runway in Milan and Valentino is staging an 85-look pre-fall runway show in New York on Friday and inviting dozens of his best clients to shop there, too.

To Chanel’s Karl Lagerfeld, even this may seem old hat, considering he showed pre-fall in December in Paris, but many other European houses plan to present their early deliveries next week to buyers and press in Paris during the couture collections. The designers are also upping the fashion quotient in their pre-season collections, which usually tend to focus on the commercial-minded varieties of nonrunway apparel.

“Pre-fall sells really well, first of all, because it gets into the stores early,” said Oscar de la Renta, who doubled his early deliveries for fall. “By looking into some of the experiences of what pre-fall means to some of the European houses, where it represents as much as 70 percent of total fall sales, we decided to make a much more important pre-fall collection.”

“Right now, business is a real challenge,” she said. “You cannot rely on your name alone because the sales are not going to happen on a hanger.”

The idea isn’t just to be first, but to also improve relationships with retailers with the flow of deliveries, since a lot of designer customers shop well ahead of the season.

“It’s a very important time for us,” said Joan Kaner, senior vice president and fashion director of Neiman Marcus. “It can be as important as runway. What’s interesting about the Donna Karan collection is that it was very fashion. Very often, designers do basic merchandise for early deliveries, but this is really the caliber of runway and really has the essence of a designer collection.”

Jaqui Lividini, senior vice president, fashion merchandising, at Saks Fifth Avenue, similarly added: “We look at it for direction to get an inkling of what we’re going to see in the fall shows.”

Versace likewise refuted the notion of pre-fall basics with a few women’s looks in her Versace and Versus men’s collections shown in Milan on Sunday, featuring typically naughty ideas like biker-style pants or a sheer, ultramini sheath with strategically placed black insets, which caused even Sharon Stone, sitting in the front row, to gape.

“The Versace woman is strong, aggressive but very clean,” Versace said. “It’s a mix between elegance an a certain nonchalance. It’s edgy.”

De la Renta added that customers are looking for new designer products throughout the year and that by mid-May, much of what remains in stores by then is “tired.”

“We are showing these clothes with the idea that it’s pre-fall, but in a lot of cases, these are clothes that a woman could wear right away,” he said. “A lot of time, when people do pre-fall collections, there are some clothes that are really boring. That’s not really what these clothes are about.”

Valentino has taken the concept a step further, inviting 27 young social clients, in addition to press and buyers, to its runway show on Friday, where the company will allow customers to directly place orders for pre-fall merchandise, without even waiting for a trunk show.

“The reason we’re placing increased emphasis on the pre-fall collection is that we wanted to empower the customer to place their own orders in advance of the season, just as a buyer would, giving them greater choices,” said Carlos Souza, director of international public relations. The company is also looking to build up its visibility in New York to cater to customers who don’t often travel to shows abroad.

Chloé president Ralph Toledano added there is another practical reason for the pre-fall collection, which represents about 50 percent of the company’s season. Showing such looks early gives the design team more time to prepare the fall runway collection, which is merchandised to blend with the color schemes and silhouettes of the first deliveries.

“Fifteen years ago, the only reason for pre-collections was to give early deliveries,” Toledano said. “Now people want strong pieces all year long. It’s very simple. Every time there is a new product getting out into the stores, then definitely, your sales are going to increase. You constantly need newness.”