NEW YORK — The early fall market was a beehive of activity.

Typically a laid-back period when retailers reevaluate fourthquarter business, as well as spring buys, this year’s Jan. 12-16 edition was underscored by a prolific turnout... 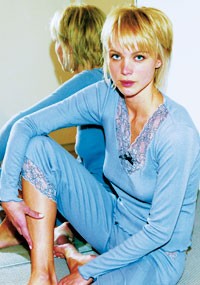 NEW YORK — The early fall market was a beehive of activity.

Typically a laid-back period when retailers reevaluate fourthquarter business, as well as spring buys, this year’s Jan. 12-16 edition was underscored by a prolific turnout of senior retail management from major stores and a number of smaller specialty operations, all on the lookout for immediate merchandise, exclusives and fashion items that will differentiate them from competitors.

The lion’s share of orders are not expected to be completed until late February, but manufacturers generally said they were feeling good about 2004, anticipating a spike in business following a successful holiday selling season for sleepwear, robes, at-homewear, underwear, daywear and bras.

The renewed optimism reflects a stark contrast to the dismal economic and retail climate in January 2003, when sales of soft goods were off sharply and apparel manufacturers were struggling to satisfy the demands of beleaguered retailers and frugal consumers.

While there might not be more open-to-buy dollars for transition and fall, vendors said they felt confident merchants would support brands and products that have performed through tough times, particularly innerwear companies that have retained solid retail partnerships and strived to offer fresh product and ideas.

Sizing up the mood of the market, Eric Wiseman, chairman of the Sportswear & Global Intimates Coalitions at VF Corp., which produces the Vanity Fair bra brand, said, “Our intimate apparel business is pretty good and we’ve been seeing a little bit of positive input over the past few weeks. But it has been difficult around the entire market. We lost three days in December — the 5th, 6th and 14th…because it was snowing and that hurt retail in general.

“But the mass channel business has been particularly good right now. Our Vassarette [bra] brand has been doing 15 to 20 percent comps each week and we renewed our agreement with Queen Latifah for our Curvations brand.” Queen Latifah is the spokeswoman for the full-figure Curvations bra label, which was introduced at Wal-Mart and will be expanded to Kmart and Shopko stores.

Jeff Matthews, president of Nautica’s men’s and women’s sleepwear, said a new line of contemporary daywear called Nautica Blue has had “strong reaction.” Special treatments include heatsealed tagless labels and low-rise drawstring effects, as well as a variety of flat and textured fabric blends such as French terry of cotton and Modal with seaming detail, and CoolMax panties.

Regarding retailers’ buying patterns, Matthews said: “They’re not giving more open-to-buy dollars. But they’re weeding out the poor players and dedicating the money to vendors and goods that are selling.”

Nancy Stone, senior vice president of sales at KN Ltd., maker of Karen Neuburger sleepwear, agreed: “There’s not necessarily more open-to-buy. My gut feeling is there will be another barrage of assessing which doors were right on. In some cases, some doors had 50 percent [sleepwear] increases in December. The traffic at this market has been incredible. Fourth-quarter results at retail were terrific for us and we’ve expanded kids sleepwear and added infants sleepwear.”

The number-one-selling item for Christmas was a slipper sock of fluffy polyester and spandex in fashion colors that coordinate with Neuburger’s sleepwear, she said.

Barbara Lipton, vice president of merchandising and design for the licensed DKNY Underwear and Donna Karan Intimates at Wacoal America, said she believes there will be more open-to-buy allotments within the next six weeks.

“I think the overall sentiment is the economy is getting better and the two weeks before Christmas were very strong at stores,” Lipton said. “The feeling is things are getting better. All of the major stores came in and did a recap. It’s been a very positive market.”

“We see three-layer knit dressing as the newest thing, poly viscose blends in the Cruz line, cashmere and silk in the Natori collection, and a great cotton and angora blend by Josie,” said Mitchell.

She added that the firm introduced a full collection under the Cruz label, which formerly was an item-driven business.

“We felt we were missing an opportunity to go after a classic, modern customer who wanted the newness and details of Natori but at an accessible price point,” Mitchell added.

“We’ve been working with many key accounts, creating exclusives for stores and even new hangtags,” West said. “I’ve done 10 store appearances across the country since October. The extra work and exposure is working.”

Lisa Cheng, vice president of the French Jenny division at Richard Leeds International, said a “Sex and the City” theme for the young, contemporary line of French Jenny sleepwear clicked for fall.

“It’s all about high heels with marabou, pom-poms, a woman who exercises at the gym…loves to shop,” said Cheng. Best-booking items included rib-pattern tank tops with logos saying “I Know What Boys Like” and “Sleeps Well With Others.”

In other developments at the Leeds company, Howard Posner has been named to the new post of senior vice president of manufacturing, sourcing and logistics. Elaine Lee, chief operating officer, has been appointed president.