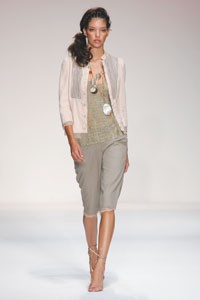 Pegah Anvarian: Knowing your strengths as a designer is half the battle of runway success. Following that maxim, Pegah Anvarian — whose looks are a fixture in many a girl-about-town’s wardrobes — played up her signature easy knit and jersey pieces to chic effect. With the rhythm and colors of Jamaica as inspiration, Lurex-trimmed dresses swayed down the catwalk, pants featured brocade waistbands and tanks had raw silk woven through their necklines. Slightly more structured suits were tempered with unfinished edges or jackets worn with sleeves rolled up casually. But the designer strayed from her forte with red-carpet gowns that were a little too cha-cha. While front-row guest Charlize Theron noted the ombréd green silk as a favorite, Anvarian’s real winners were of the daytime variety.

Juan Carlos Obando: Juan Carlos Obando’s overdone theatrics in his spring show — a Cirque du Soleil type orchestral soundtrack, flashing lights and black makeup slathered on some of the models — detracted from some beautiful clothes. He should have played it straight. The simple, pristine white silicon-washed A-line mini frocks and cotton voile blouse with crocheted panels were great — and salable — and the black silk taffeta cocktail dresses and coat were beautifully crafted. There was just a brief misstep with some of the boldly colored, floor-length trumpet skirts that had fussy string ties connecting the tiers, causing models to flash bare legs or more.

Chan Luu: Chan Luu presented a tight, well-edited collection of 15 unconstructed looks consisting of casual separates. There was a slight Asian influence in some of the pieces as in the soft silk fabrics and kimono-like duster coats. The designer showed a certain romantic pragmatism by juxtaposing simple shapes with delicate details, such as the loose, layered skirts and dresses in pale natural hues adorned with yarn embroidery, beading and other handcrafted flourishes.