Easy dresses in silk and chiffon dominated the action for spring-summer 2006 collections at the latest round of boutique trade shows here. 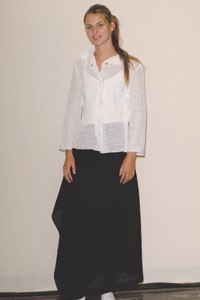 PARIS — Easy dresses in silk and chiffon dominated the action for spring-summer 2006 collections at the latest round of boutique trade shows here, held in tandem with Paris Fashion Week.

Paris Sur Mode, Workshop, Rendezvous, Tranoi, Atmosphere d’Eté and 19Vendome all wound up on Monday. Buyers flocked to stands showcasing easy-to-wear dresses that were flirty, feminine and unstructured, with novel details such as puffy pockets, hemlines and sleeves.

Annalise Marchioro, a buyer for Parana Padova in Padova, Italy, said her budget is flat, but her buying habits have changed. “We are ordering fewer pieces, but more labels,” she said. “We want to give our customers inexpensive alternatives so they can buy more and mix up their look.” Marchioro said she was seeking voluminous skirts with cinched waists. “We want a feminine silhouette,” she said. “We don’t want jeans. That’s finished.”

“We want clothes that are chic, comfortable and feminine; we don’t want jeans or streetwear,” agreed Susanna Santapostino, buyer for Plus, a multibrand shop in Milan.

Even at Rendezvous, where Gothic and punk looks were popular, buyers were seeking out unique pieces with feminine silhouettes.

Those shapes were common across town, culminating at 6267, an Italian brand showing at 19Vendome whose puffed-up silhouettes excited buyers.

“The line is so distinctive,” said Deborah Gilbert Smith, owner of an eponymous boutique in Millburn, N.J. “It’s such a modern silhouette. It’s a new way of doing the essentials.”

Brigitte Moody, buyer for Takashimaya in New York, said she was looking for “cotton, poplin, eyelets, lots of texture — something that stays with the trend but is wearable and can be mixed with what women already have in the closet.”

The store bought, among other things, crochet-textured skirts and shirts from Paris-based Korean designer Eun Hwa, who exhibited at Tranoi.

At other shows, buyers also were homing in on pieces that could be mixed and matched.

Kinuko Nagamine, a buyer for Japanese retailer Hemispheres, ordered a series of dainty cropped jackets while shopping at 19Vendome. “I’m looking for featherweight materials that are bright and have a touch of vintage,” said Nagamine, who said her budget this season was 10 percent higher due to positive sales last season.

Nagamine also bought several pieces from German label Schumacher, whose bestseller was an ankle-length lace skirt divided by a long row of buttons. “It’s vintage and personal, it tells a story, yet you can use it to create your own style,” said Schumacher’s founder, Dorothy Zinghoff.

Organizers cited an uptick in international attendance. “The biggest change we noticed this year is the increased number of Japanese and Americans,” said Muriel Guyot, organizer of Paris Sur Mode. “They were also spending more. I heard that one American buyer placed 800 orders for one item by a little-known label.”