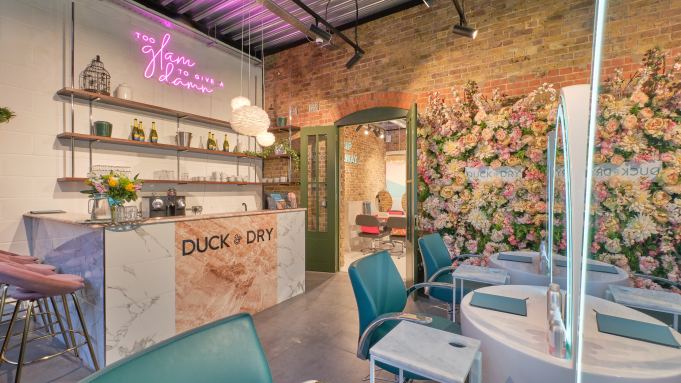 LONDON — Granted, there isn’t much time in between shows and presentations during the busy days of London Fashion Week. But for the lucky ones with a few hours to spare, here are some nine-to-nine ideas.

Start the day at Apple Butter Café in Seven Dials, Covent Garden, at the newly opened East-meets-West all-day café. It serves up Middle Eastern-inspired dishes such as the Croissant Florentine with beetroot sauce and a signature dessert known as The Apple.

Covent Garden has multiple new offerings across food and fashion. Not to be missed, Dominique Ansel, creator of the famous Cronut and winner of the World’s Best Pastry Chef, has opened a second outpost, Treehouse, at 24 Floral Street. The two-floor space features a French-inspired takeaway boutique bakery and bistro that serves up a selection of pastry-focused sharing plates.

Farther down Floral Street the fashion retailer Jigsaw has launched a new flagship concept while across the road, Glossier has announced that it’s hugely popular pop-up cosmetic play-space that will remain open permanently.

If you’re looking for an afternoon tea spot, or a London specialty, head to King Street in Covent Garden to sample a special afternoon tea by Petersham Nurseries and Cool Earth, a charity that protects the world’s most at-risk forests. For 12 weeks only, Petersham is offering a limited-edition afternoon tea menu influenced by Cool Earth’s work in the Peruvian rainforest. Classics from the Petersham Nurseries roster will be combined with Peruvian-inspired sweets made from locally and ethically sourced ingredients. Proceeds from this partnership will go toward helping the charity combat deforestation and climate change.

Fancy taking a swing at a workout after all that eating? Grab your gloves and head over to Mayfair for a class at Jab. It’s the newest addition in the growing trend of boxing classes led by a team of trainers selected from some of the best clubs in the business. Head into the atmospheric studio that pays homage to Sixties and Seventies boxing studios and join an empowering group lesson.

Across the street, Gucci’s traveling Pins project has landed at Selfridges. The Italian label has taken over the store’s corner shop for the second time, dressing it in disco balls, neon signs and a Seventies psychedelia-inspired range that includes everything from rainbow-colored ready-to-wear, to leather bags and stationery. The space stocks a series of exclusives including a new iteration of the logo-printed bag from the Pins collection in forest green.

For more exclusive brand collaborations, head to Harrods where Bottega Veneta is presenting a selection of spring 2020 accessories through a pop-up. Taking influence from the iconic Harrods visual identity, hero pieces will be available to buy in racing green including the Padded Cassette, Pouch and miniature bags — styles that have quickly garnered cult status.

For more cerebral fare, head to Carlos Place where the designer and actor Waris Ahluwalia and filmmaker Sam Taylor-Johnson are working with Matchesfashion for their Curated By series. The personalities and styles of Ahluwalia and Taylor-Johnson have been captured in a series of exclusive photographs and a short film during which they discuss their careers and relationships with fashion and design. A relevant selection of items from brands including Gucci, Paul Smith, Loewe and Isabel Marant have been handpicked by the two, and are available to buy in-store and online.

Contemporary art lovers should make time for Tate Modern’s Steve McQueen retrospective, which runs until May 11. His moving images, photography and sculptures encompass timely topics such as representation, identity and history. On show are some of McQueen’s most notable works including Exodus and the ongoing work, End Credits.

Get ready for a night out at Duck & Dry at Old Spitalfields Market in east London. Pop in for a quick pick-me-up pamper and select from one of the signature blow-dries, updo or braid styles on the menu. Gents are also welcome, with the option of a cut for short styles. On Feb. 14 and 15, the place is offering Blow Dries and Bubbles with a complimentary glass of Mirabeau Le Folie Rosé.

For dinner, make sure to grab a seat at Muse by Tom Aikens. After a five-year absence, Aikens is marking his return to the London fine-dining scene in a two-floor mews house in Belgravia. Tasting menus are on offer for lunch and dinner, and promise a gastronomic adventure heavily influenced by Aikens’ childhood and career. The Rebecca Korner-designed interiors complement the fine-dining “theatre,” where guests can watch the open-plan kitchen pushing out dishes with curious names such as “Beech Tree” and “Love Affair.”