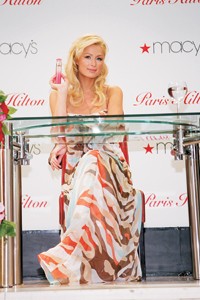 Well, a little musky for starters, as fans discovered Friday afternoon during Hilton’s promotional appearance at Macy’s Herald Square to push her second fragrance, Just Me by Paris Hilton. But, judging from the crowd of over 300 lined up along the flagship’s 34th Street block for a chance to meet the hotel heiress, the day was more ode than eau de Paris.

“We bought the bottle so we could meet her,” said 23-year-old Michelle Fohme, with a limited-edition “Paris” pass wrapped around her neck. Only those who purchased the $49 fragrance this week at Macy’s received the pass, which scored them a chance to share face time with the celebutante and get her autograph. Ten-year-old Michael Cresanti-Daknis came bearing a handcrafted “I Love You, Paris” poster, not to mention a half-dozen long-stemmed roses. When asked about his crush, the boy grinned and exclaimed, “She’s hot.”

But, alas, security was so tight, Hilton handlers prevented Cresanti-Daknis from delivering the goods in person. “They told me they were going to give them to her later,” he said afterward.

Even those without the pass got a glimpse of the heiress vamping it up for the cameras in an Empire Diane von Furstenberg dress, Prada heels and Paris Hilton handbag in the middle of the main floor’s Beauty Arcade. She brought the space to a grinding halt, as shoppers gawked and sales associates careened over their counters with camera phones in hand.

To be sure, there were plenty of Paris aficionados in the house, but not all may have been there for the best of reasons. When asked why she was a fan, Nicole Reveron, 21, matter-of-factly replied, “Paris is famous for doing nothing.” Others had a decidedly more silver-lining approach. “All that bad publicity [of hers] is still publicity,” says Will Zapata, 23, who came in on the 7:30 a.m. train from Connecticut. “She’s laughing all the way to the bank.”

As for the fragrance itself — with numerous floral touches as well as warmer sandalwoods and vanilla — Hilton described it as “definitely more mature” than her last scent, 2004’s fruitier Paris Hilton. Commenting on the new name, she said, “I was wearing the original and someone asked, ‘What are you wearing?’ And I was like, ‘Just me.'”