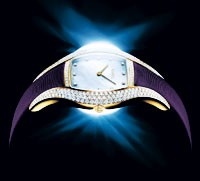 At the Baselworld Watch & Jewelry Show, which opened in Basel, Switzerland, on Thursday, the Paramus, N.J.-based watch manufacturer is showcasing its newly acquired luxury Swiss watch brand in a redesigned setting. Where once Ebel’s booth was moody with black drapings and dark lighting, the new booth design is one of the few in Basel to make use of natural daylight.

“The architecture won’t change, but the appearance will,” said Grinberg of the Basel booth, adding wryly, “It will be communicating a new message. We are bringing daylight back to Ebel.”

Movado Group agreed to acquire the Swiss luxury watchmaker from LVMH Moët Hennessy Louis Vuitton for $47 million in cash in December, and the deal was completed March 1. Losses at Ebel were estimated at more than $15 million last year, and Movado is now facing the challenge of integrating Ebel into its operation while restoring its mid-Eighties profitability and splendor.

Grinberg is up for the Ebel challenge. Brimming with confidence at Movado’s contemporary art-filled Paramus headquarters earlier this month, he couldn’t help but swoon about Ebel’s reputation, its history and the future he and his company envision for the brand.

“What we saw in Ebel was a great brand that could complement our portfolio of existing ones and really be our ultimate luxury brand,” Grinberg said. “It had been very strong in the late Eighties and early Nineties, but under two different ownerships, it lost its way somewhat. We know we will put it back on the right path toward regaining its rightful position as a luxury brand.”

To help achieve this, Movado will:

Grinberg believes Movado will be able to turn Ebel around thanks to its past experience with luxury brands. Until the mid-Nineties, Movado was the distributor for Piaget and Corum watches in the U.S., and the company is largely credited with introducing and building those brands here. In 1997, Movado sold the Piaget and Corum distribution rights back to the individual brands to focus on lines for which it could control product development and marketing.

Movado Group operates the Movado, Concord and ESQ brands, as well as the licensed Coach and Tommy Hilfiger lines. Last month, the company reported double-digit earnings growth for its fourth quarter and year. For the year, earnings rose 13.9 percent to $22.9 million, or $1.84 a share, from $20.1 million, or $1.65 a share, in the previous year. Sales for the year ramped up 10 percent to $330.2 million.

Ebel, founded by Eugene Blum and Alice Levy in 1911 in La Chaux-de-Fonds, Switzerland, remained a small, European-focused business until Pierre Alain Blum, the founders’ grandson, took over the operation. Blum started extending the brand’s visibility internationally and is credited with building Ebel’s recognition with U.S. consumers. Ebel entered the U.S. market in 1979 with the Sport Classic line. Since then, it has launched a variety of watch styles, including the Beluga, which is available in 18-karat yellow gold, stainless steel and a cuff version, called the Beluga Manchette. LVMH purchased Ebel for an undisclosed sum from Bahrain-based Investcorp in 1999.

Since acquiring Ebel, Movado has eliminated 70 employees from the brand’s operations in Switzerland, though it will continue to be based in La Chaux-de-Fonds. Top managers also remain: Randi Shinske continues as president and chief executive officer of Ebel USA Inc., Xavier Gauderlot still heads up global sales, and Marc Michel-Amadry remains as Ebel’s international marketing director.

“We will run it as an independent brand the way we run all of our brands,” said Grinberg. “We don’t have management across brands. The synergies we will have are in the back office, meaning distribution, after-sales service and accounting functions, and on the supply-chain side.”

Ebel will add a high-end, prestigious label to Movado’s portfolio and will give the U.S. firm more leverage internationally. Seventy percent of Ebel’s sales are outside the U.S., Grinberg noted, “I think we will see opportunities to grow the brand in the U.S., but also internationally because if we do the right things from an advertising, product and attention-to-detail point of view, from packaging to displays to catalogue and brochures, it will help Ebel worldwide.”

Movado plans to cement Ebel’s image as a luxury brand through product and marketing.

“The emphasis on luxury will change,” Grinberg said. “The brand before was more concerned with producing volume, and we will now focus a great deal on bringing back the gold business, which virtually had not been a significant presence in the Ebel brand for a number of years. As a luxury brand, we believe that we have to have a strong position with gold watches.”

To that end, the company plans to increase Ebel’s gold assortment over the next six to 18 months, though Grinberg wouldn’t disclose details. Typically, retail price points for Ebel watches start at about $1,200 and go up to $500,000. With more gold in its assortment, Grinberg said the average retail price point, which currently hovers around $4,000, will rise “incrementally.”

“We are looking at this as a jewel,” he added. “We are not looking at how big we can grow this in sales. It’s about positioning it as our ultimate luxury brand. We are really all about continuing to build the Ebel brand in an organized manner in the luxury category, rather than saying, ‘We are going to turn it from $60 to $100 million.’”

In addition, Movado will introduce a new marketing initiative for Ebel. In September, a new advertising campaign will bow in fashion and upscale general interest magazines. Currently in the development stage, the campaign will likely market the Beluga line, as well as Tarawa, a watch design launched last year. The ads will be created by Lloyd & Co., which also works on other Movado brands. Movado’s U.S. advertising budget for Ebel will be approximately $5 million.

The Ebel acquisition has been largely applauded.

Eric Beder, an independent retail consultant here, said Movado’s acquisition is a nice deal. “It gives Movado another luxury maker.” However Beder said Movado should have done the deal through stock options to get some liquidity from it, rather than the all-cash deal valued at about $47.3 million. However, Beder did give Movado’s management the thumbs up for its decision in March to issue a 2-for-1 stock split of an increase in the company’s authorized shares.

Beder said the next step is for Movado to take Ebel to the next level in terms of getting more liquidity to its stock. “There is just not enough for major investors to pay attention to,” Beder said. To do that, Beder said Movado can perform a stock offering to get liquidity, noting its share are trading close to its 52-week high. Another option, Beder said, is for its founders to sell off shares and reduce their position.

Still, for now Beder said he sees clear skies ahead for the luxury market, noting he does not believe there to be a slow down as the economy continues to boom.