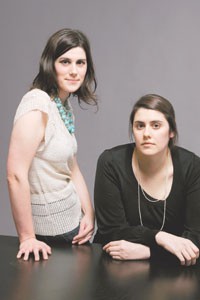 NEW YORK – For the fifth time, wine company Ecco Domani is reaching out to emerging fashion designers by offering them a cash injection through its Ecco Domani Fashion Foundation.

The winners each receive a $25,000 grant to help them stage a show during next month’s fashion week here.

“Through the Fashion Foundation, we can support new designers who often don’t have another way to find the money to put up a show during fashion week,” said Jennifer Thomason, Ecco Domani’s marketing manager. “It allows us to make sure that new talent is brought to the fashion industry.”

This year’s award recipients are joining a group of past winners that reads like a Who’s Who of New York fashion’s much-touted new generation. They include Proenza Schouler, Zac Posen, Doo.Ri, Peter Som, Richard Chai, As Four, Trovata, Jeffrey Chow and Jasmin Shokrian.

“We really are seeking out people who have great talent, but who don’t necessarily have a forum to bring it in front of people,” Thomason noted. “This is more of an altruistic approach on the part of the brand. We don’t require our winners to do anything with the wines. The only requirement is that they put on a show during fashion week.

There were 89 applications this year, almost twice the number vying for the 2005 awards. To enter, the hopefuls had to be at least 21 years old, in business for fewer than five years and already selling to at least one retailer. In addition, they had to provide three fashion industry references and at least 10 images of their designs for the judges.

The team of judges has remained mostly consistent since the foundation’s inception, though there was a slight change in the lineup this year. Joan Kaner, who retired as senior vice president and fashion director of Neiman Marcus last year, and Michael Bastian, the former fashion director for Bergdorf Goodman’s men’s store who is starting his own men’s collection, were no longer involved.

“This year’s winners are all up-and-coming, and unique in that they span the culture of fashion,” Gilhart said. “Bryan Reyes is more focused on a full designer collection; Hanuk is more artistic and has an organic style; Rodarte is more focused on couture, and Vena Cava is more about a certain casual style with an edge. Then there is VPL, with an homage to body and lingerie, and Rag and Bone, which has denim at its core and is also doing a full collection. It’s a good group and attention should be brought to these people.”