Ecco Domani is expected to name six emerging designers or labels as recipients of its annual Fashion Foundation awards today. 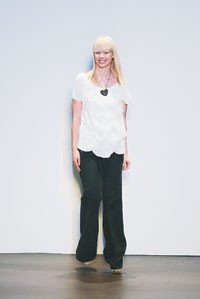 This year’s winners are Erin Fetherston, Naum by Waleed Khair­zada and Julia Jentzsch, Sans by Lika Volkova and Alessandro DeVito, Angel Chang and Tom Scott for women’s wear and Patrik Ervell for men’s wear. Each will receive $25,000 toward putting on a runway show during next month’s fashion week.

The six designers were selected from more than 100 applicants nationwide and had to fulfill several requirements to submit their bids. These included being in business for no more than five years, having at least one retail account, references and look books or photographs of their designs. The panel of judges then whittled the list down to 25 semifinalists before selecting the final six. This is the sixth year wine company Ecco Domani has sponsored the awards.

“The success of [Ecco Domani Fashion Foundation] is undeniably due to the outstanding judging panel and their remarkable ability to identify the future stars of fashion,” David Bowman, marketing director for Ecco Domani wines, said in a statement. “We are proud to have seen so many past EDFF alumni go on to successful, lucrative fashion careers. We congratulate this year’s winners, who join this elite group of fashion visionaries.”

This story first appeared in the January 2, 2007 issue of WWD. Subscribe Today.