A West Coast movement is building with Outerknown, The Lost Explorer, Bureo, Reformation and other fashion brands that appeal to customers who value both design and sustainability but don’t mind paying more for it. 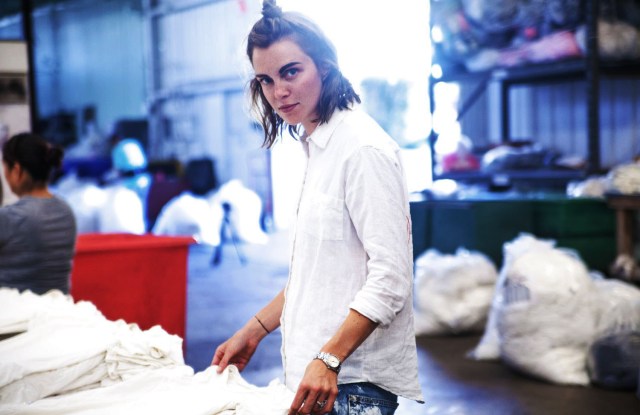 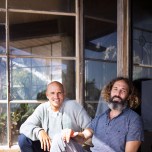 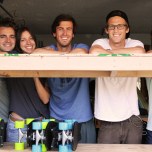 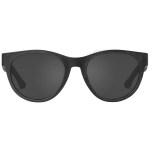 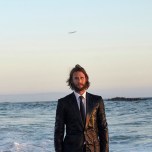 Epiphanies make for memorable moments in history. For Kelly Slater, the 11-time world surfing champion and founder of the sustainable fashion brand Outerknown that’s backed by Kering, his came when he was fasting. Sitting in his beachside home in Australia eight years ago, between reading books about health and fasting on water, he wondered about the impact that the free surf gear he received from his then-sponsor Quiksilver might have on the environment and the people working in the factories.

“It just popped into my brain really strong: I need to find out where all my clothes are made and who’s making them and where do the materials come from,” Slater recalled.

On a recent sunny afternoon in Malibu, bronzed and barefoot in a white pocket T-shirt and navy chinos from his forthcoming spring collection, the 43-year-old athlete is sharing what he discovered in quest of those answers. The journey wasn’t what he expected.

His first attempt at eco-fashion, VSTR for Quiksilver, fell short of his expectations and met a quick demise after its spring 2012 launch due to Quiksilver’s financial difficulties. Outerknown’s debut this past July sparked tirades on social media from his fans suffering sticker shock from the $95 baby alpaca knit beanies and $125 recycled nylon swim trunks. “If not many people can afford the clothes, how will this brand make any real difference?” chided one.

Despite the criticism, Outerknown’s creative director John Moore said sales have been brisk for certain items, including the $295 recycled nylon shirt jackets stuffed with a filling of recycled polyester, at retailers such as Mr Porter, Selfridges and Tradesmen. To be sure, the Los Angeles-based company makes less than 300 units of each understated, logo-free style in accordance with fair labor standards. Its inability to hit minimum orders for fabrics and production runs partially explains the high prices. It also adds up costs by using water-soluble tags and replacing plastic bags with ones made from sugar cane.

Slater, who’s the largest shareholder in Outerknown, is unfazed by accusations that he’s a sellout.

While Patagonia’s Yvon Chouinard is often lauded as the grandfather of environmentally responsible apparel companies, no successor has stepped up to build a fashion business based purely on an eco-ethos — until now.

A new generation of West Coast entrepreneurs is appealing to customers who value both design and sustainability but don’t mind paying more for it. Their timing couldn’t be better given the landmark agreement in Paris earlier this month among leaders from 195 countries aimed at staving off global warming. Hailing from diverse backgrounds — in addition to Slater the surf champion, another is a scion of the de Rothschild banking dynasty, one is Roald Dahl’s granddaughter and some are apparel veterans reacting to what they view as environmental abuse in the industry — they all share the same goal: To change the way the fashion industry works and create a new kind of luxury for an informed consumer.

“We want our products to make people think differently,” said David Stover, the 30-year-old cofounder of Los Angeles-based Bureo, which recycles fishing nets into plastic that it uses to manufacture sunglasses and skateboards. “People don’t want to see branding and marketing — they want to see more behind the product. They want to see a solution through their consumptions, not just buy a product to buy it.”

The Millennials are credited for shifting priorities. Consider Phoebe Dahl, the 27-year-old founder of Faircloth & Supply and granddaughter of the famed author of “Charlie and the Chocolate Factory.” For her L.A. line, she shapes drop-waist dresses, jogger pants and striped T-shirts out of linen found in deadstock troves, organic cotton and toxic-free dyes. For each item sold, she donates a school uniform to a girl in Nepal.

“I wouldn’t be able to do things not eco,” she said. “It’s not in my conscience.”

With more designers like Dahl in tune with what’s good for the planet, and numerous retailers eager to attract Millennial shoppers, “we’re at a tipping point,” said Jungmaven founder Rob Jungmann, who, at 46, is working on his third apparel venture revolving around hemp. “The more people doing it, the more ideas we see,” he said.

Perhaps the ultimate validation is the willingness of established companies and wealthy investors to fund the eco-movement. Slater reached out to Kering after his manager told him how the Paris-based luxury conglomerate enabled Stella McCartney to meld high fashion with animal rights advocacy. Declining to reveal exactly how much Kering invested in Outerknown for a minority stake, Moore simply said “they’ve put a significant amount of money into the equation.”

Two years ago, Patagonia’s Chouinard initiated $20 Million and Change, which he described as “an internal fund to help like-minded, responsible start-up companies bring about positive benefit to the environment.” It has invested in 10 companies, including Bureo, which received an undisclosed minority investment.

Fashion figures Karlie Kloss, Andrew Rosen and Miroslava Duma now own a piece of L.A.-based Reformation, which makes flirty dresses and other women’s styles out of sustainable fabrics, vintage goods and deadstock materials. Armed with $12 million in funding, Reformation’s founder and chief executive officer Yael Aflalo is on a mission to grow with more product categories and new stores beyond the three she operates in Los Angeles and New York. “We’re looking at a number of different cities,” said Aflalo, 38.

A blue-eyed heir of a European banking family, David de Rothschild is fortunate to have an independently funded company, The Lost Explorer. The 37-year-old takes a serious — and personal — approach to nature. Very tall, with brown hair that flips out from his nape and blends into his beard, he inked his arms with tattoos of a divining rod and a tree with lush branches. The adventure-seeker has skied across Antarctica and sailed to Sydney from San Francisco on a boat made from 12,500 plastic bottles. A trained naturopath and author of two ecology books, he has guided corporate behemoths, including Nike, toward a sustainable strategy. To balance his novice status in fashion design, Len Peltier and Jonathan Kirby came aboard as cofounders after holding senior creative positions at Levi’s.

Designing for four environments of jungle, mountain, ocean and desert in lieu of seasons, de Rothschild’s L.A.-based company is preparing to roll out a dozen products on its e-commerce site. Among them are organic mezcal distilled into $200 bottles branded with the phrase “drink curiously”; $20 skin balms mixed from ingredients such as olive oil, shea butter and turmeric, and a $495 jacket inspired by a Thirties-era fireman’s uniform. A women’s line is to be revealed in the second half of next year. Under a two-year partnership, Swiss-based Schoeller is providing innovative materials; for instance, water-resistant wool, reclaimed cork and merino wool that are bonded into fabric used for jackets and a travel bag.

The Lost Explorer is also collaborating with Mexican jeweler Daniela Villegas to craft travel knives out of 18-karat gold, sapphires and other gemstones. Priced between $13,000 and $20,000 and elegant enough to wear as pendants, the one-of-a-kind pieces have caught the attention of Just One Eye, the arty L.A. boutique.

More than convincing people to buy the products, de Rothschild is eager to steer the conversation toward nature. “The product, to me, is the least exciting part,” he said. “In a way, we’ve become too obsessed with stuff. For us and the conversation we want to have is, how people can come together and develop and it actually improves upon how we view nature.”

Slater’s goal is to make his personal brand stand for a sustainable lifestyle. In addition to Outerknown, his other business investments include Purps, an energy drink company he started with RVCA cofounder Pat Tenore and a physician; Firewire Surfboards, an eco board-maker; Kelly Slater Wave Co., a surf resort developer that’s built its first artificial wave pool in California’s Central Valley, and Mikoh, a women’s swim line cofounded by his girlfriend, Kalani Miller.

Linking with Mikoh is one possible way for Outerknown to segue into the women’s business. “We’ve had that conversation many times,” Slater said.

Outerknown is also considering broadening its assortment with lower price points for spring 2017. Shelly Gottschamer joined from Patagonia to ensure the integrity of the supply chain and sustainability goals. Following a three-year timeline to reach profitability, Outerknown is exploring the idea of opening its own stores. Still smarting from his experience with VSTR, Slater dismissed any notion of selling Outerknown, even to Kering, which topped the Dow Jones Sustainability Indices in September.

“It’s just nice to be in control of your destiny,” he said.

Despite the perks of being a celebrity — family vacations with Oscar-winning actress Julia Roberts, befriending model Cindy Crawford through a former landlord and donning a Brioni tux to last May’s Costume Institute Gala at the Metropolitan Museum of Art, to name a few — he cares more about what’s happening around him than what he’s wearing on his back.

“Kelly is a thinker,” said designer Heidi Merrick, who met him almost 30 years ago when her dad, Al Merrick, began making surfboards for him. Better yet, she said, he can get surf ceo’s and the thousands who worship that lifestyle to think. “If that many people take on Kelly’s cause and say, ‘Wait, we need to be more sustainable,’ that’s a job well done.”

Eventually, Slater hopes sustainability will become such a basic part of all businesses that he won’t need to discuss it at all. “I want the brand to be able to rest on the laurels of the design,” he said. “We’re just trying to make good clothes.”