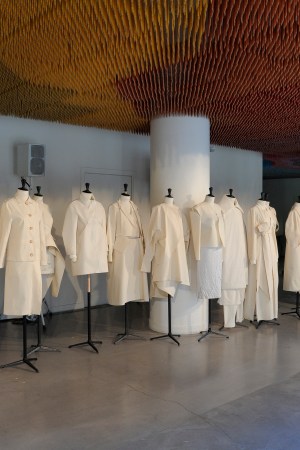 In a private preview of the fourth-year students’ exhibition that will open to the public Friday at the school, directors of master graduate studies, Stephane Wargnier and Céline Toledano, revealed a new development at this technical fashion academy, which is working closely with Paris’ couture studios and ateliers.

Stressing that there is a labor shortage of skilled workers to fulfill the needs of the fashion industry, the school has inaugurated a new section dedicated to the techniques of patternmaking; out of the 34 graduates this year, five were part of this new program. Among them were Mathieu Lebas, who showed a group of four coats from classic to cocooning with details morphed into the pattern and all finished by hand in a double-face construction; Hélène Fleury, who worked on a wardrobe inspired by military clothing with voluminous capes and coats done in waxed cotton, some with detachable lining.

Meanwhile, the 29 other students in the main department did not lack in accomplished finishing. Notable works included beautifully executed layered men’s wear by Christophe Lavet, who was inspired by outerwear and monks’ attire; and several looks by Astrid Dupuy, whose work was derivative of sailing boats, with eyelets and stitching details taken from sails on dresses, ponchos and skipper-inspired dungarees in bonded cotton. More feminine proposals were offered by Rémi Morin and Nanni Li, who respectively based their work on artist Louise Bourgeois, with a focus on intricate fabrics, and folkloric Spanish costumes, with voluminous petticoat skirts balanced by precisely deconstructed tailoring.

The goal of this Parisian school is to give its students a more controlled approach than might be offered in ultracreative institutions, which seems to give many a chance to be directly hired by studios. Statistics show that over the past three years once fourth-year collections have been promoted, only about 15 percent of featured graduates are still searching for a job in the fashion industry.