The high end and the low end appear to be holding their own in financially beleaguered Spain, but the midmarket retail sector is in bad shape. 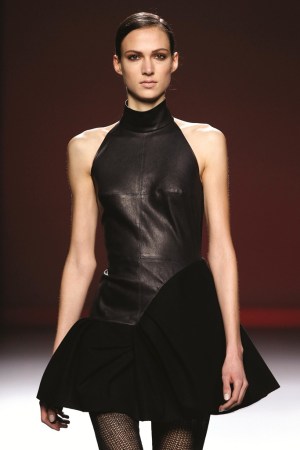 MADRID — The high end and the low end appear to be holding their own in financially beleaguered Spain, but the midmarket retail sector is in bad shape.

The Madrid-based Spanish Commerce Confederation reported the economic crisis has caused 40,000 stores to close in Spain in recent years, causing massive layoffs and an unemployment rate approaching 23 percent, the euro zone’s highest. In addition, austerity measures such as an increased sales tax and salary cuts have contributed to what the media here are calling “the crack” in domestic spending.

The closures and cutbacks are impacting Spanish fashion designers, most of whom showed in Mercedes-Benz Fashion Week Madrid from Feb. 1 to 5.

For instance, one of the few to show abroad, Amaya Arzuaga closed her 12-year-old, 4,300-square-foot Madrid store — her only domestic unit — earlier this year to cut costs and develop online commerce and strengthen the label’s presence in international multibrand locations in the U.S., Europe, Hong Kong and Kuwait. The Madrid-based Arzuaga is currently scouting cheaper offshore production facilities, she said.

At fashion week, held at the fairgrounds here, Arzuaga sent out her bridge line called AA, made up of one-sleeved dresses with draped effects and lots of contrasting volume plays in wool jersey and leather combinations in black, navy and red. A series of tent dresses was less successful. On March 2, Arzuaga will show her premier namesake collection at the Spanish Embassy in Paris, where she has a showroom and press office.

According to reports, Adolfo Dominguéz is shuttering 46 stores, including locales in Madrid and Barcelona, following a 9.2 percent dip in sales for the first nine months of fiscal 2011 ending Nov. 30. A spokesman blamed “the intense deterioration of the Spanish economy and shrinking internal demand.” As part of its restructuring plan, the upscale women’s and men’s brand, headquartered in the north of Spain, did not participate in Madrid Fashion Week.

With a $4 million budget, comparable to the September edition, the five-day event featured 44 designers, including a batch of 10 newcomers under the banner El Ego. Sources said the collaboration with Mercedes-Benz inked in December made little change in foreign attendance.

While designer Jesús del Pozo died last summer, his label lives on and appears to be surviving the economic turmoil with a store on Madrid’s trendy Calle Almirante and a lucrative fragrance business. On the runway, del Pozo’s creative team referenced the Middle East with muted colors and rich textured fabrics, including dramatic wraps, long snuggy dresses and a disappointing range of evening gowns.

Brights colors were on the back burner this season with two exceptions. Agatha Ruiz de la Prada showed lots of red and fuchsia and orange, a range of blues from celeste to turquoise, and a dab of yellow. In what is traditionally an upbeat show, she sent out fluffy bubble-shaped chubbies with patterned knit tights, coin-dot prints, color-blocked shifts, stripes, signature heart motifs and cutouts, with see-through plastic handbags.

Elisa Palomino’s color palette, with hues such as vibrant berry, pastoral shades and black, was inspired by the seductive eccentricities of New York cafe society as depicted by modernist American painter Florine Stettheimer. The Valencia-born designer, whose background includes a seven-year stint as John Galliano’s head of studio, presented special-occasion dresses and bias-cut gowns in plush velvet devoré and exclusive floral prints. The 43-year-old Palomino lives and works in London “because I have more customers there,” including such accounts as Harvey Nichols and, starting this month, CoutureLab. She’ll show Feb. 18 at London Fashion Week.