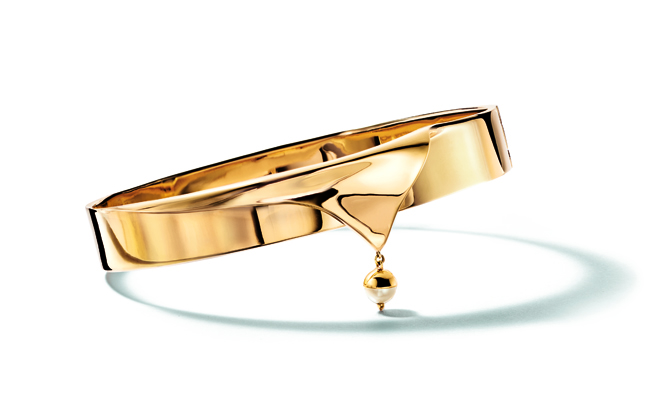 NEW YORK — Tiffany & Co. has literally been a household name for Eddie Borgo for as long as he can remember.

“Growing up as an American with a mother who wore [Elsa] Peretti and a grandmother who wore [Jean] Schlumberger, I have had Tiffany in my life in some ways since I was a very small child,” said Borgo. “We had Tiffany crystal and Tiffany silver in our home.” His mother bought baby rattles and silver spoons as gifts wrapped in blue boxes tied with white bows.

Borgo’s relationship has progressed beyond consumer and fan of the brand. His first seven-piece fine jewelry capsule collection for the company launches in November at Tiffany’s Fifth Avenue flagship in Manhattan as well as on tiffany.com for a limited time. This is a big deal for Borgo, who introduced his costume and fashion jewelry label in 2008 and expanded into handbags a year ago.

“Tiffany has a legacy in terms of jewelry and that, in my humble opinion, is untouchable by any other American company,” said Borgo. “To have our name associated with their brand is such a huge gift.”

It’s a gift that gives on several levels. Aside from one-off custom pieces for private clients, this is Borgo’s first fine jewelry collection, each piece done in 18-karat gold and one or two freshwater pearls, which are expensive raw materials.

“We would never have been able to execute and develop this within our house, which is part of the reason why, financially, I was so interested in working with Tiffany,” said Borgo, noting that his designs for the capsule are relatively large scale and utilize large amounts of gold, which required a partner with the resources to realize them.

For Tiffany’s part, working with a designer such as Borgo, known for his refined edge — cones and studs are a signature motif — seems to be in line with the traditional jeweler’s recent quest to raise its fashion credibility. Last year it partnered with Dover Street Market on its first collaboration with an outside company and in April it began selling the Tiffany T collection through Net-a-porter, the brand’s only global wholesale channel. In July, the retailer tied up with Reed Krakoff, who will collaborate on its home, gifts and leather goods collections.

“Tiffany has always had a legacy of seeking out beauty and innovation,” said the firm’s design director Francesca Amfitheatrof. “This [Borgo’s collection] kind of collaboration, where we work together with designers with a really distinct point of view, results in unique, fresh design.”

A year in the making, the collaboration stems from the CFDA/Vogue Fashion Fund Tiffany & Co. Development Grant that Borgo received in 2011, which was when he developed a business relationship with the jewelry behemoth. Through the CFDA/Vogue Fashion Fund, the company asked designers to create a capsule collection inspired by its affiliation with the Whitney Museum (Tiffany has pledged to sponsor three consecutive Whitney Museum Biennials beginning in 2017). More specifically, the project’s designated muse was Gertrude Vanderbilt Whitney, the museum’s founder, an heiress born into the Vanderbilt family in 1875, who went on to be a successful sculptor and pioneer and patron of the downtown New York art scene. Her studio and gallery on West 8th Street in Manhattan became the first Whitney Museum of Art.

“We had to create connectivity between what we do as a metalsmith and jeweler here in New York, which is embedded in structure, minimal form and geometry, and what Tiffany does, which is much more organic and fluid,” said Borgo. “And then considering the body of work that Gertrude left behind, which were these beautifully draped forms.” She was also known for her love of pearls.

Borgo worked with Amfitheatrof on the collection, which features a necklace, bracelet, pendant, earrings, a ring, brooch and ear cuff. The lines are cleanly sculptural but not severe.

“I find the tension between Eddie’s love of classicism and form really refreshing and interesting,” she said. “He manages to combine a very high-end sensibility with street edge, and I love that contrast and freedom.”

Borgo brought the grandfather mold of the safety chain choker that is part of his collection of classics to the Tiffany goldsmiths to hand-drape a fold of gold over the choker, from which a pearl dangles. “That was quite the learning curve for me,” he said. “In particular to work with goldsmiths who are hand hammering these sheets of gold into what essentially became liquid gold fabric.” Each piece is engraved with Eddie Borgo for Tiffany, using Borgo’s actual signature rather than his company logo.

Prices are significantly higher than Borgo’s own collection, which ranges from $75 to $600. The Eddie Borgo for Tiffany pieces start at $600 for the ear cuff and go up to $12,500 for the collar necklace. The earrings are $1,900 and the pendant, $3,800. “In a transparent way, this gives us the opportunity to gauge the appetite of our consumer for fine jewelry,” said Borgo. “This collaboration with Tiffany gives us insight into who that client is.”

On the topic of growing his company, of which he is sole owner, chairman and chief creative officer, though he has worked with angel investors, Borgo says branching into fine jewelry is on the radar but isn’t necessarily the number-one priority. Fashion jewelry is the core business, but the handbags he launched last year are growing. He’s also done a small number of desktop objects such as paperweights, pencil holders and letter openers, and is very interested in the home and furniture market. As Borgo said, “I’ve always seen the company becoming much more of a design firm than a fashion or jewelry house.”