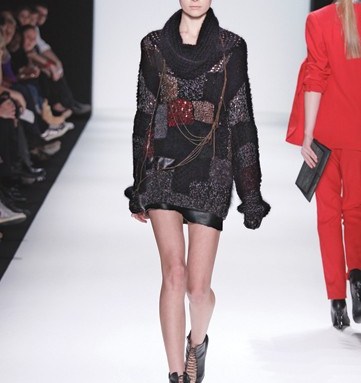 MBFWB ended a solid fourth round here Feb. 1, cementing Berlin’s position as Germany’s fashion window. While not necessarily representative of Berlin — half of this season’s official 24 participants are not headquartered in the capital — the shows offered a broader-than-ever view of style trends coming out of Europe’s biggest market.

Yet surprisingly, perhaps, given the city’s much-hyped reputation, the fashion view from Berlin is more commercial than avant-garde. That’s lead to some gripes on international blogs. But if not startlingly original, the majority of the collections shown here exhibited more polish, chic and fashion savvy than ever. Not only attractively ready-to-wear, the best were ready to retail — not an unwelcome attribute in troubled economic times.

A case in point was the Schu-macher collection. Celebrating its 20th anniversary this year, Schumacher made its Berlin runway debut doing what it does best: playful, imaginative and lovingly detailed apparel in the season’s must-have shapes. That meant sheer silk blouses with softly puffed sleeves and the biggest bows in town, to wear under little brushed mohair coats or cuddly cardigans, and pants that ranged from lean with satin sheen, to Seventies twills and cropped boy-girl styles. Silk charmeuse dresses played with draping effects; parachute silk or crepon shifts made an airy impact under big, open knit cardigan coats; tailored jackets were anything but classic, as in one cropped, funnel-necked number in camel wool gathered at the waist with a bow.

Mongolian lamb, goat and skins of all sorts definitely had their day in Berlin and provided some of the most popular women’s pieces at Boss Black. Notable were a three-skin coat of fluffy goat, lamb and astrakhan-looking cowskin; a goatskin coat with solid wool sleeves, or fur chubbies that neatly broke the line of slim, wool pencil skirts. Indeed, there was a new feminine softness at Boss for fall, with dresses in more fluid fabrics, as well as a less man-tailored take on nine-to-five dressing.

The Boss Black show in the Berlin Botanical Garden’s imposing tropical plants house was a once-in-a-generation occasion, as the 100-year-old glass structure is emptied only every few decades for restoration. As for the men’s wear in the show, the main collection borrowed a surprising amount from the group’s edgier Hugo range. The look was strictly and dramatically pared-down, and there was a short, sharp-shouldered, narrow-lapel silhouette.

In one of the season’s most convincing shows, Joop, under the design direction of Dirk Schönberger, also went lean and mean. And even a little naughty, with fetish-inspired leather, PVC and wet-look materials featured for men and women. The show, which was held in the Hamburger Bahnhof contemporary art museum, used a runway coming straight out of what looked like a hole blasted in the wall — just as the collection decided to blast into traditional tailored looks.

There was nothing soft about this collection, with its sharp silhouettes, throat-choking collars, buttoned-up shirts and outerwear layered under men’s sport coats and suits. One runway tactic that struck a definite chord: the sleek, almost neoprene-looking leather turtlenecks that peeked out of more respectable shirt-and-tie combos, though the swinging cape-style jackets might have a harder time hitting the streets.

For the women, a simple black coatdress was made edgy with leather-trimmed shoulders and leather leggings. And shift dresses were anything but innocent in shiny black crocodile skin or dull silver leather.

Tough luxury was the name of the game for Michalsky’s femme fatales, while his men showed a touch of rough proletarian chic. The Berlin-based designer upped the fabric ante for fall, turning jeweled and colored floral lace into leggings paired with a crisply tailored white jacket. A skin-tight metallic leather jumpsuit was ready to rock and the silver gray satin, lace-topped gown looked red-carpet bound. But the piece de resistance, especially given the show’s church venue, was Michalsky’s stained glass print featured in legging-tight pants for guys and gals, men’s blousons and a Swarovski crystallized gown, on its own or under a black leather blouson with lace-up sleeves.

Fabric also set the tone at Berlin’s Sisi Wasabi, where designer Zerlina von dem Busche used explicitly old-fashioned textiles like dotted organza or satin jacquard for cool, dressy clothes for thirtysomethings. The shapes were long and linear or graphically round, and despite their intricacy, von dem Busche kept novelty fabrics and treatments like handcrafted leather or organza mille-feuille skirts in check by using the simplest of bodices or tank tops.

Lala Berlin by Leyla Piedayesh was all about juxtaposition as well. While it’s quite a challenge to make S&M-inspired fashion seem homey, her mix of fetish leather and cuddly, patchwork or open crocheted knits managed to make cardigans sexy and leather leggings seem like a comfortable option.

Markus Lupfer’s trademark embroidered T-shirts and jerseys and reinvented sweaters were presented in a still-life display amidst the faded baroque grandeur of the Kronprinzenpalais, while Bernhard Willhelm opted for a surreal tableau vivant of his Seventies skiwear-inspired collection. Also of note: Marcel Ostertag’s contemporary Munich glam; FelderFelder’s embellished leathers; Peek & Cloppenburg Designer for Tomorrow student competition winners Julia Knüpfer’s dimensional knits and Joel Horwitz’s directional sports textiles, and the historical fantasies of Berlin designers Constanze Gonzales and Paul Scherer. After starting off with wearable tweed coats and suits, Scherer Gonzales ended with a muted brown parade of bustled, corseted and petticoated gowns that looked as if Mae West had stumbled into a gothic novel. At the sight of the final gown, which involved a heavy snail train the size of a small car, the audience couldn’t help leaving with a smile.

Despite scheduling conflicts with Düsseldorf that moved the Premium Trade show up by a day, as well as concerns over retail travel budgets, Premium also closed its fall edition on a positive note. The organizers said 16,837 trade visitors attended the three-day show, compared with 16,354 visitors a year ago.

A number of new designers and companies, who sent representatives to check out the action here this season, said they are already planning their Berlin entry next summer. Moreover, the news of Bread & Butter’s return to Berlin next July, as well as its no-holds-barred party/presentation at the future venue, Tempelhof Airport, also gave a big jolt to the Berlin buzz. While Bread & Butter’s chosen July 1-3 dates caused some initial concern, given the previously announced mid-July slot for Premium and MBFWB, Premium has officially said it will work with all parties to determine a joint July date. While IMG wouldn’t comment for the record, sources say the organizers of MBFWB are also committed to a combined Berlin effort next season.