A sampling of our favorite editor’s pages, with commentary from the creators. 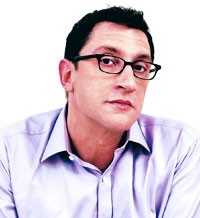 NEW YORK — Being a magazine editor is largely a behind-the-scenes job. But there’s one place in every magazine where the person in charge gets to pull back the curtain to introduce him- or herself to the readers: the editor’s letter. Every editor has a different philosophy; some like to put their personalities or opinions on display, while others prefer merely to preview the magazine’s contents. Likewise with pictures: Some use a large, glamorous head shot, others a grainy digital or group pose, and still others refuse to show their faces at all. Herewith, a sampling of our favorite editor’s pages, with commentary from the creators (and some of our own).

Like many of the other people pictured in Star, Dolce is not smiling. But in his case, it’s not because some paparazzo cornered him fetching the morning newspaper in his Skivvies.

He says: I’ve given up on my picture. My mother called me up and she screamed at me. She said, “You’re not that bad looking!” I have to have a new one shot but I haven’t had the time.

We say: Considering Dolce’s head shot in the magazine is about the size of a postage stamp, it’s probably not worth fretting over.

She says: We always take the picture at the last minute, with a digital camera. There’s no professional makeup artist or hair person. A woman I met once said to me, “You actually look like the person in the ed note!”

We say: Enjoy that award. It may be the last one you see for a while once ASME catches wind of this.

This story first appeared in the September 10, 2004 issue of WWD. Subscribe Today.

Scrapbooks are big with Elle Girl readers, and Holley’s editor’s page often resembles an end-of-summer-collage. This is one editor who wants to be BFF. In one photo, she is pictured with a horse.

She says: I don’t want a head shot that looks like it should be hanging in a diner. So we try to do candids. At the last minute my art director makes me go outside and takes a Polaroid of me. Polaroids are very generous.

Some editors are shy, hiding behind celebrities in their photos or avoiding the camera altogether. Not Sikowitz. This is one top pencil who’s comfortable in his own skin. Check out those short-shorts, ladies.

He says: I work out seven days a week — three days of upper body in the gym and road biking the other four days. When you see the guy who’s the editor in chief and he’s living the life, I think that’s inspirational.

We say: Hey, if you got it, flaunt it. But Peter, while you’re at it, think about getting some contact lenses. Those Buddy Holly glasses say video store clerk, not gym rat.

Obviously they’re not pinching pennies over at GQ. As quite a few media-watchers have noticed, Nelson changes his photo like other people change shirts. But his whimsical stream-of-consciousness monologues on politics or culture are actually worth reading — an ed note rarity.

He says: I hate every picture of me.

We say: What’s to hate? September is our favorite. You can practically hear the martini shaking as he intones: “The name’s Nelson…James Nelson.”

After moving from Cosmogirl to Seventeen last year, Rubenstein’s rising-star status was confirmed and her ed note migrated from the front of the book to the middle of the well. Thanks to her confessional style (sample quote: “Let’s just say I’m a hairy, hairy girl”), readers truly feel as if they know her — perhaps more than they’d like.

She says: It’s very important to me that the magazine has a human face. I try to look friendly and not too fashionable.

We say: Friendly? In her October note, Rubenstein looks more hungry — as in, “Welcome to my gingerbread house, little children.”

Granger’s editor’s letters are a mix of essayistic musings and plugs for that month’s stories, while his dark suit and unsmiling mien convey journalistic gravitas.

She says: I’ve had four different pictures in seven years. I’m just trying to keep up with the march of time.

We say: Don’t you have enough National Magazine Awards? Lighten up, fella! Next time, maybe try some short-shorts. Or a horse.

When Lawhon updated her editor’s photo for the June issue, people wondered aloud whether she had had, ahem, some work done. And she had — but her too-smooth appearance was the product of an airbrush, not a scalpel.

She says: Anything you can do to help make a connection with the readers is a good thing. If it takes a picture, so be it.

We say: We’re glad Lawhon switched to a more natural-looking photo after June. Airbrushing is overrated. Keep it real.