Sleepwear designer Eileen West is getting back into foundations after a 14-year hiatus through a licensing deal with Komar Co. 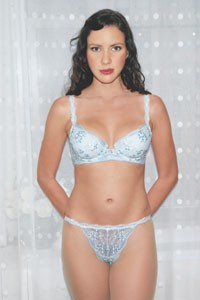 NEW YORK — Sleepwear designer Eileen West is getting back into foundations after a 14-year hiatus.

West is known for her signature looks for the boudoir, such as vintage-inspired florals in Impressionist watercolor shades, Victorian-looking sleepgowns, robes of pima cotton and cotton batiste and European lace treatments. Among West’s strongest trademarks is pristine white silhouettes that have become mainstays for bridal, as well as for special occasion.

West will be using the same romantic formula for spring with a select collection of bras and coordinating panties and bustiers bearing the Eileen West name. A number of styles will be rendered in floral prints, laces and embroideries that coordinate with West’s sleepwear designs.

West had held a licensing pact with VF Corp. in the early Nineties, but a focus during this period on volume-oriented product and collections made it difficult to create directional fashion items.

But the emphasis on luxury and special pieces brought about a rebirth of the new foundations collection, manufactured under license by the Chelsea Design Group unit of the Komar Co. Komar, which has the licenses for luxe sleepwear by Vera Wang and Le Mystère, also produces and distributes Eileen West sleepwear.

“I’m very pleased with how the [foundations] collection looks,” West said. “It definitely has my signature and it’s really well edited, an easy sell. There’s been great teamwork with Chelsea Design and Komar.”

Greenberg would not give a first-year sales projection. However, the foundations are expected to generate wholesale revenues of between $3 million and $4 million the first full year, according to industry estimates.

Distribution is aimed at 100 major store doors in April, including Bloomingdale’s, Nordstrom and Dillard’s. Marshall Field’s, or its new name, Macy’s, could be part of the launch, Greenberg said.

“One of the enviable things about the Eileen West customer is she represents such a broad range, from young brides and mothers to middle-aged women, who are comfortable with the opacity of the fabrics Eileen uses,” Garfinkle said. “The collection also has a high-level quality of fabrics and we’ve brought a lot of newness in styling.”

Special treatments include engineered edges that lay flat on the figure and a thin memory foam for bra cups combined with a lightweight spacer fabric that remains white. Fabrics include embroidered stretch lace and tulle, satin and stretch cotton knit blends. Bra sizes are 32A to 38DDD. Colors include eggshell, pale blue, natural buff, white, pale yellow, beige, pale pink and rose pink. Suggested retail is $36 to $52 for bras and $18 to $24 for panties. Bustiers are $65 and $78.

Eileen West foundations will be shown at the Chelsea Design showroom at 171 Madison Avenue in Manhattan.