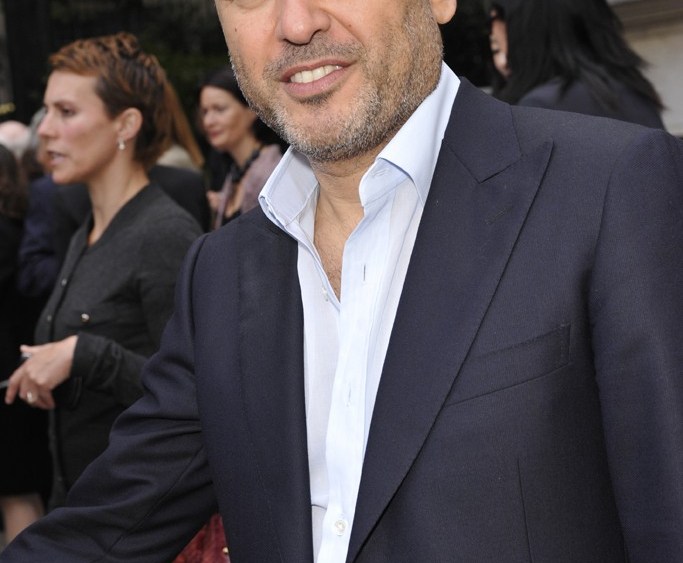 BEIRUT, Lebanon — In an era where designers are celebrity personalities in their own right, Elie Saab prefers to let his designs speak for themselves.

Though well known in the Middle East since the Eighties, Hollywood’s love affair with Saab began with Halle Berry’s Oscar appearance in 2002. The image of Berry in the iconic figure hugging burgundy gown accepting her Best Actress Award was forever etched in people’s minds. So was the name of the designer — Elie Saab.

“When you think of Halle Berry, she comes in your mind with this dress. It was a very important moment for us, a moment nobody can plan — a spontaneous thing, and I’m so happy to have had it,” says Saab in an interview at his Beirut headquarters.

Hollywood red carpets are arguably the most important fashion runways in the world and Saab’s exposure has catapulted his business in recent years.

“The red carpet definitely has a direct impact on the business because when the customer sees a celebrity wearing that dress, there is more demand,” says Chucri Cavalcanti, managing director of Elie Saab Group.

Saab did not start out dressing celebrities. His passion for design began at the age of 9, when he used his mother’s tablecloths to cut dress patterns for his sisters. “I was always surrounded by beautiful women, so the desire to dress them and make them look elegant was my constant inspiration.” The self taught designer turned his passion into a career when he launched his business in 1982, at the age of 18. His fantastical creations were an instant hit among the Lebanese high society clientele.

This year he marks 30 years in the industry. His growing global business has 150 employees and includes two haute couture salons, located in Paris and Beirut, and flagship stores in Beirut, Paris, London, Dubai and soon Hong Kong. Saab’s ready to wear collection and accessories are carried in 50 points of sale around the world including Bergdorf Goodman, Saks Fifth Avenue and Neiman Marcus.

Saab, a soft spoken, shy man who only grows effusive when talking about his family or his designs, said he looks at his career in two parts. The first pre-1996, when he focused on establishing his business in his home market, and beyond when he expanded internationally. In 1997, he was invited to take part in the prestigious Camera Nazionale della Moda as the only non-Italian designer among an anthology of Italian designers. He showed his couture collection in Rome for three consecutive years and in 2000 was invited by the Chambre Syndicale de la Haute Couture to show his collection in the French capital, the first non-European designer in that category.

Saab still views Beirut as his home base and creative hub of the brand. Despite the political upheaval, the designer said he has never been tempted to move his base from Lebanon. A visit to his house, where he prefers to entertain rather than go out, draws a group of close friends who talk mainly about art, music, family, travel and current events and little about fashion.

“I love my country and I have been coping very well from here,” Saab said. “Definitely, we passed through some difficult times, but we managed to run the business in the smoothest way possible.”

His design team is based in Lebanon and every couture dress is handmade under his supervision at the atelier. The atelier is filled with young Lebanese designers, both male and female, and Saab has been instrumental in training a new cadre of young designers in the country.

While many couturiers create gowns that lend themselves more to works of art, Saab is very practical in his approach. He said he designs wearable dresses for real women.

“Sure it’s art but I don’t believe in art of no value. I prefer to feel you like to have this art. The value of what I do is how much I see my clothes being worn. I don’t do dresses to impress but to fit the silhouette, to get the right cut of the dress in order to highlight the woman’s figure at best.”

Couture is a very personal process for Saab. Though he has a team in Paris and Beirut who travel upon customers requests all over the world, Saab is himself involved in the creation of every dress.

“I like to choose the fabric first, I love to touch it and feel it, and then I move to the form, mould the fabric and create the look.”

The perfectionist designer is involved in every stage of development of a couture gown. “I like seeing the dress on the mannequin to do the final touches. And even if I cannot be present to the fittings and appointments, none of the dresses leave the atelier without my approval.”

Saab believes very strongly in the survival of couture, despite the ups and downs in the global economy. “It will always exist, in some form or another, evolving and adapting itself to women’s changing lifestyles.”

Despite the high price of haute couture, the Middle East remains a strong market for such luxury products. Though the Elie Saab Group does not publicize sales figures, Cavalcanti says the Middle East region remains one of their most important markets, generating 35 percent of total sales. In a recent report, Euromonitor International estimated residents of the United Arab Emirates alone spend more per head on luxury goods than any other country in the world. Even in the more conservative Gulf countries like Saudi Arabia, Kuwait and Qatar, the culture of lavish weddings creates strong demand from women who discretely like to showcase Elie Saab gowns at female only events.

With his business on firm ground in Middle East, the company is eyeing the Far East and Russia as key markets for growth. “The luxury market in Asia has been growing significantly. It’s important for us to be part of that market,” said Cavalcanti. After the Hong Kong store opens later this year, they plan to expand to Beijing and Shanghai by 2013.

Saab is committed to “continuous progress,” he said. “We are developing new lines to reach a larger audience.” While haute couture will always be a mainstay for the company, like all fashion houses, Saab is focused on expanding the brand and diversifying product offerings.

By far his widest reaching branded product, Elie Saab Le Parfum, which was introduced last year, is carried in more than 10,000 points of sale globally. This was part of a 10-year fragrance and cosmetics license contract with Beauté Prestige International, the core fragrance subsidiary of the Shiseido group. Saab’s brand extension and license agreements are not limited to fashion and beauty. He has designed special edition BMWs for the Middle East and more recently, yachts. Saab launched the first of three megayachts designed by him in Abu Dhabi last year. “I always sought to represent my vision of modernity and elegance beyond the conventional limits of fashion. Designing a yacht is a perfect opportunity to expand my brand’s universe by creating the experience of luxury.”

Cavalcanti said next in the pipeline is an eyewear license agreement as well as home lines and furniture. And as the company grows, they will consider going public. “Ultimately if we want to be a global player we have to be thinking of that ahead of us. We are preparing for it and institutionalizing things in such a way that the company is ready for that when the time comes,” said Cavalcanti.

In the meantime, Saab continues to create. Jetting between homes in Lebanon, Geneva and Paris, with his wife Claudine and three sons by his side — Elie Jr., 21; Celio, 18, and Michel, 16 — he sees endless opportunities for the company. His eldest son has shown interest in the family business, something Saab said he doesn’t push for, but welcomes.