The funeral was held on Wednesday at Milan's San Carlo Al Corso church. 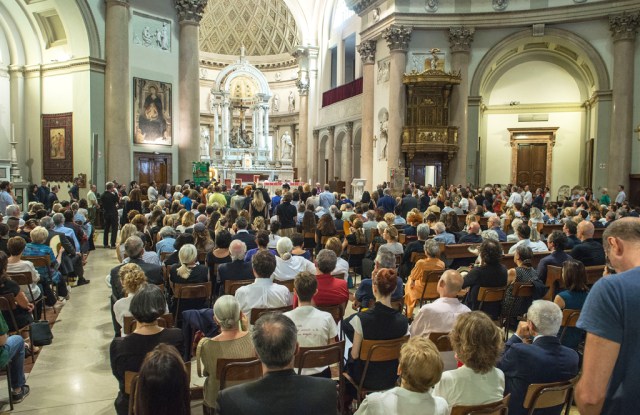 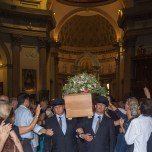 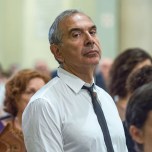 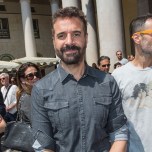 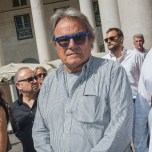 MILAN — “A big piece of my life has gone forever,” said fashion retailer Rosy Biffi at the funeral of Elio Fiorucci, who was found dead in his apartment here Monday morning.

Fiorucci, who will be buried in Sueglio, his mother’s native village located on the mountains overlooking the Como Lake, is survived by three daughters: Ersilia, 55; Augusta, 52, and Erica, 40.

Judging from the large crowd that flocked to the San Carlo Al Corso church — located a stone’s throw from Galleria Passarella, which from 1967 to 2003 housed the late fashion guru’s legendary store — Fiorucci had an impact on the lives of many people.

Those from the fashion industry who attended the funeral included OVS chief executive officer Stefano Beraldo; Beppe Modenese; Oliviero Toscani, who arrived with his wife Kirsty and their children Olivia, Rocco and Lola; Leonardo Girombelli, the son of Genny’s founder Donatella Girombelli, and designer Fabio Novembre with his friends Carlo and Ennio Capasa.

“The great thing about him is that he always remained a real person,” Ennio Capasa, creative director of Costume National, said of Fiorucci.

Others in the crowd were architect Stefano Boeri; Italo Manca, the owner of Milan’s legendary La Libera restaurant, and journalist and music expert Mario Luzzatto Fegiz, as well as Milan’s volunteer City Angels. “We have always been proud to wear a uniform designed by him,” said the organization’s president Mario Furlan, who added that the biggest Milanese homeless shelter will be renamed “Casa Fiorucci.”

A few hours after the death of the fashion designer and retailer, a petition was launched online at charge.com to ask to rename the Galleria Passarella after Fiorucci.

Don Antonio Mazzi, a famous Italian priest who is involved in activities aimed at helping drug addicts, celebrated the mass. “I met Elio when I arrived in Milan and at that time the city was so full of pain and suffering,” said the priest, referring to the Eighties when Milan’s Parco Lambro was populated by drug dealers.

Mazzi, who read a poem by the late Milanese writer and poet Alda Merini, highlighted the poetic spirit of Fiorucci. “He was able to transform shreds into works of art — he was not a designer, he was a poet,” Mazzi said. “I think that now we still need someone who is able with some shreds to make Milan sing, to give the city color, a heart, a soul, because there is too much pain here. In this city, we would need less politics, less personalities and intelligent people, but more poems and dreams.”